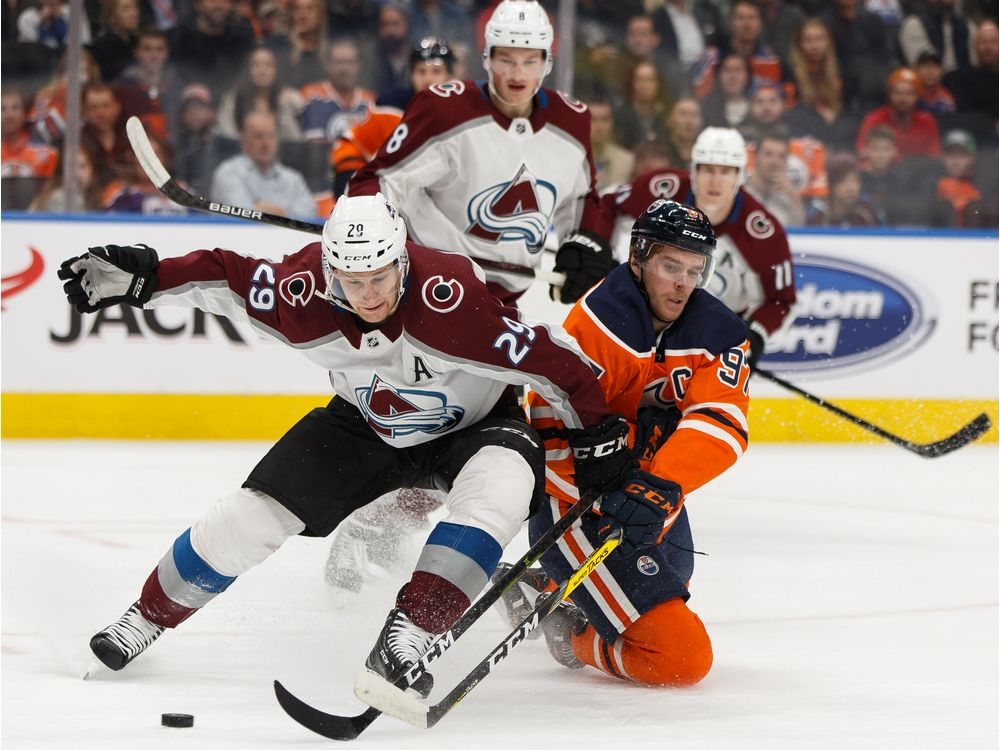 Edmonton Oilers general manager Ken Holland was intrigued to see how the high-tech wizardry of Connor McDavid and Nate MacKinnon was going to look maybe as linemates, wearing the Maple Leaf in the Olympics, until the NHLers weren’t going this past February.

“(Head coach) Jon Cooper was there and he was salivating at the line possibilities,” said Holland, who was helping pick the team along with St. Louis Blues GM Doug Armstrong.

The MacKinnon-McDavid hype machine is in full throttle with the NHL’s two fastest centres going head-to-head in the Western Conference final. It should be appointment viewing, except for MacKinnon, who’s an opponent not a super fan.

“Not really thinking about that a whole lot,” he said. “Obviously, I see that stuff. Hopefully, that gets more viewers and lowers escrow (for NHLers) but other than that, I don’t care.”

“Growing up, I was a big Blackhawks fan and my minor hockey team had kind of the same logo. He was very dynamic. He’s a very dynamic player still. He’s always the first guy up in the rush, first guy back. He was kind of one of the guys where his speed could change the game and stuff,” said Makar, who is battling Nashville’s Roman Josi for this year’s Norris trophy.

“Keith and Seabrook were such a good pairing to learn from. Keith was a great player and still is.”

GIVE YOUR HEADS A SHAKE

With Twitter idiots threatening Colorado centre Nazem Kadri after he tumbled into Blues goalie Jordan Binnington and put him out of the last series, Evander Kane jumped on those cretins.

“We all know that’s unacceptable. I’ve been through it many times in my career. His was a little more public, honestly, this time around. It’s unfortunate. I hope (the NHL’s investigation) was handled the right way,” said Kane, who may be on the ice a lot against Kadri if the Oilers and Avs match power with power with McDavid vs. MacKinnon and Kane drops down to play with Ryan-Nugent Hopkins.

This ‘n‘ that: The Oilers are in a win-loss situation playing the Avs, both on the ice and off. If they beat Colorado to get to the Cup final, that 2022 third-round draft they’re giving Chicago for last summer’s Keith trade becomes a second-rounder this July as long as Keith stays in the top-four in ice-time. And the 2022 second-rounder to Montreal for Brett Kulak this trade deadline, moves to a ’23 second-round selection … Avs coach Jared Bednar spent four years coaching in the American Hockey League and before that two in the semi-pros in South Carolina before he got his shot with Colorado, so he’s been down a somewhat similar path to Oilers head man Jay Woodcroft, although Woodcroft also worked as an NHL assistant before taking on Bakersfield for three and a half years. “I don’t really look at it as carrying the flag. Most guys do whatever they can to be the best they can possibly be and coach at the highest level they possibly can. That’s how I approach it,” said Bednar … Holland watched Joe Sakic lead the Avs to two Cups as a centre and now he’s knocking on the door as a GM. “If I had to judge, Joe’s one of the best in the business,” said Holland. “He had a team that was at the bottom four or five years ago (2016-17, 48 points) and I look at some of the trades he’s made (Devon Toews, Kadri, Darcy Kuemper, Andrei Burakovsky) and his patience to build this team”… McDavid played junior in Erie with
Andre Burakovsky and tough guy defenceman Kurtis MacDermid, in the top three NHL heavyweights with Milan Lucic and Ryan Reaves. “Big Mac is a massive human,” said McDavid … Nurse said the stress level this spring in comparison to last year when they played the Jets in Round 1 is not even close, and he’s been hurt since late in April, when he had a collision with the Avs’ J.T. Compher (core muscle issue). “Last year, I got a call that my fiancée had gone into labour (the day of Game 4 while in Winnipeg). She was incredible,” said Nurse, who got back to Edmonton in time, after playing over 60 minutes of the triple-overtime affair to to see the birth … The Avs’ Gabe Landeskog has only been playing after knee surgery and passing on the morning skates and practices but he was on the ice Monday with MacKinnon and Mikko Rantanen … Oilers forward Leon Draisaitl, who also has been taking morning skates and practices off to rest his sprained ankle, actually skated on leftwing with McDavid and Zach Hyman Monday afternoon in Denver, for the first time since late in the Los Angeles series, a tip-off he’s on the mend. So did Nurse, who has been taking several skates off, but is making progress with his injury … The Oilers flew to Vancouver on Sunday and bused across the border to Bellingham, Wash., where they chartered to Denver so they didn’t have to COVID-19 test any players. They did the same early in the Los Angeles series, but one of the two buses broke down then, which made for a long day … While Zach Kassian (2:48) and Josh Archibald (4:17) barely played in Game 5 against Calgary, Woodcroft is sticking with them for the first game off line rushes Monday. No Devin Shore or Derick Brassard or farmhand Dylan Holloway. “Calgary dressed 11 (forwards) and seven (defencemen) and they played nine, maybe 10 forwards,” Woodcroft said. “It’s not that (Kassian or Archibald) did anything wrong, it’s just how it played out.” Kassian has averaged 7:37 through the playoffs.