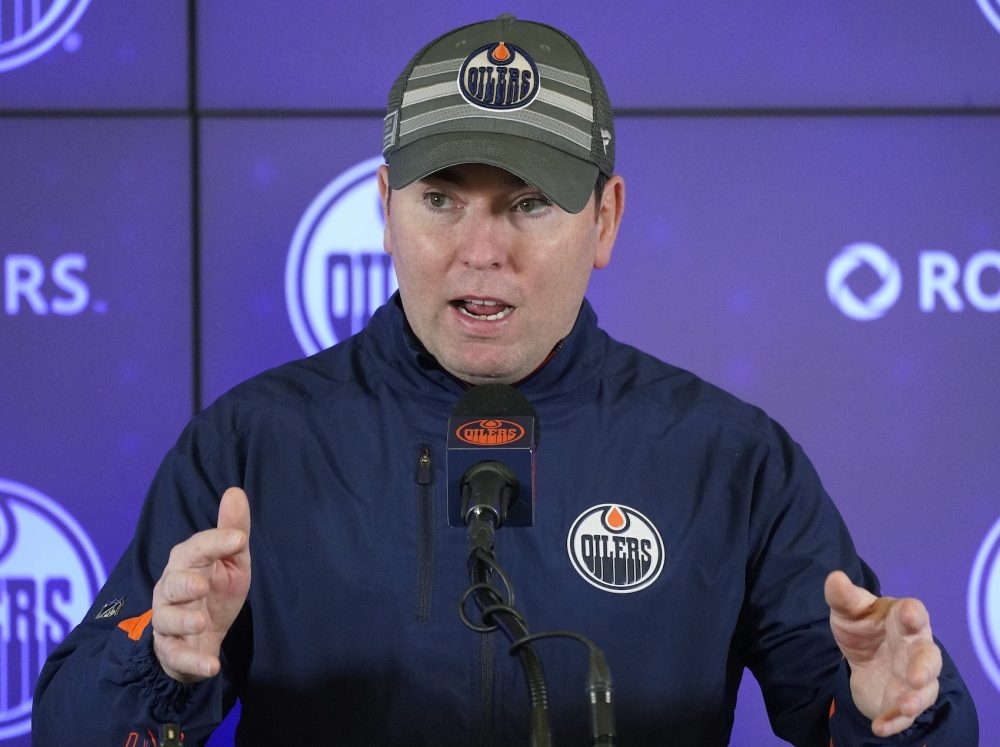 Nugent-Hopkins injured his shoulder on a fairly innocuous-looking Ryan Lomberg hit and has missed five games, four of them losses

While Evan Bouchard was back at practice Tuesday after missing Monday’s game in Calgary with the flu, Ryan Nugent-Hopkins, whose absence has left a big hole on the power play, and Jesse Puljujarvi were nowhere to be seen as the Oilers have their noses pressed up against the playoff glass right now, trying to get in as a wild card.

Nugent-Hopkins, who touches all the bases on the PP, the penalty-kill and five-on-five, injured his shoulder on a fairly innocuous-looking Ryan Lomberg hit 10 days ago and has missed five games, four of them losses.

“Nuge is still week to week,” said Oilers coach Jay Woodcroft. “Jesse (knee or ankle) is a bit closer but not listed as day-to-day yet.”

Puljujarvi injured his leg stretching to score off a McDavid pass against the Anaheim Ducks Feb. 17, and has missed nine games, leaving a hole in the top six, and on the power play. They are 3-6-0 with him out of the lineup.

Defenceman Tyson Barrie (oblique muscle issue) could be back with the main group later this week after not playing against Montreal or Calgary. He’s on injured reserve, as are the other two, but his injury isn’t serious.

As for Mike Smith, he skated before the main group, but remains out with the flu. The Oilers are carrying three goalies — Mikko Koskinen, who will likely start against Washington Wednesday, call-up Stuart Skinner, and Smith — six defencemen, and 13 forwards with Kyle Turris the only extra forward for now.

Defenceman Markus Niemelainen, who didn’t skate Tuesday, was loaned to Bakersfield. It may be for personal reasons; his wife is close to giving birth.

Jagr, 50, is still playing for his hometown Czech team Kladno as winger/owner and moved their game from a 5,200-seat facility to the 18,000-seat O2 Arena in Prague on Tuesday.

“We would like to dedicate the proceeds from the entrance fee to Ukrainian families,” said Jagr, who wears 68 to remember 1968, when Soviet tanks rolled into Prague.

Evander Kane had a set-to with Matthew Tkachuk of the Flames off a centre-ice faceoff in Calgary on Monday, but nothing came of it. “We know what he’s about. There’s not a lot of back-up to that talk,” said Kane, who saw lots of the Calgary player when he was in San Jose … Much angst over ex-Oiler Milan Lucic shoving Philip Broberg from behind into the end boards in Calgary on Monday. Broberg crashed into the boards and could have been hurt and it was penalty-worthy but Broberg also put the brakes on 10 feet from the end wall, with the freight-train coming. “The referee didn’t see fit to call anything there,” said Woodcroft … The Capitals are down two forwards. Rookie Joe Snively, very effective against the Oilers in Washington Feb. 2, had surgery on his left wrist (scaphoid bone, like Oilers farmhand Dylan Holloway), and former Cup winner Carl Hagelin was poked in the left eye by an errant stick in a practice and also underwent surgery. His career could be in jeopardy … Ken Holland, along with everybody else in the NHL, took a pass on claiming Detroit unrestricted free-agent defenceman Danny DeKeyser off waivers. Way too much money ($5-million cap hit), plus he’s a left shot D and the Oilers need a right-shot blueliner. DeKeyser, 32, who wears an A, has never regained his form after back surgery in 2019 … Paul Coffey, who has been around the Oilers recently as an adviser, remembers playing against current assistant coach Dave Manson. “I had a hat trick one night (for Pittsburgh) and got into a fight with Dave. He fed me (punches). So many that I forgot I had a hat trick,” laughed Coffey … Zack Kassian is zipping around practice in a face shield a month after he broke his jaw Feb. 9, with an elastic timeline on when he can play again. It was announced as four to eight weeks. If it’s six weeks, that’s around the trade deadline March 21 … Depth Oilers defenceman Slater Koekkoek remains out for personal reasons and still isn’t playing in Bakersfield. He has played just two games in the last month since he cleared waivers.