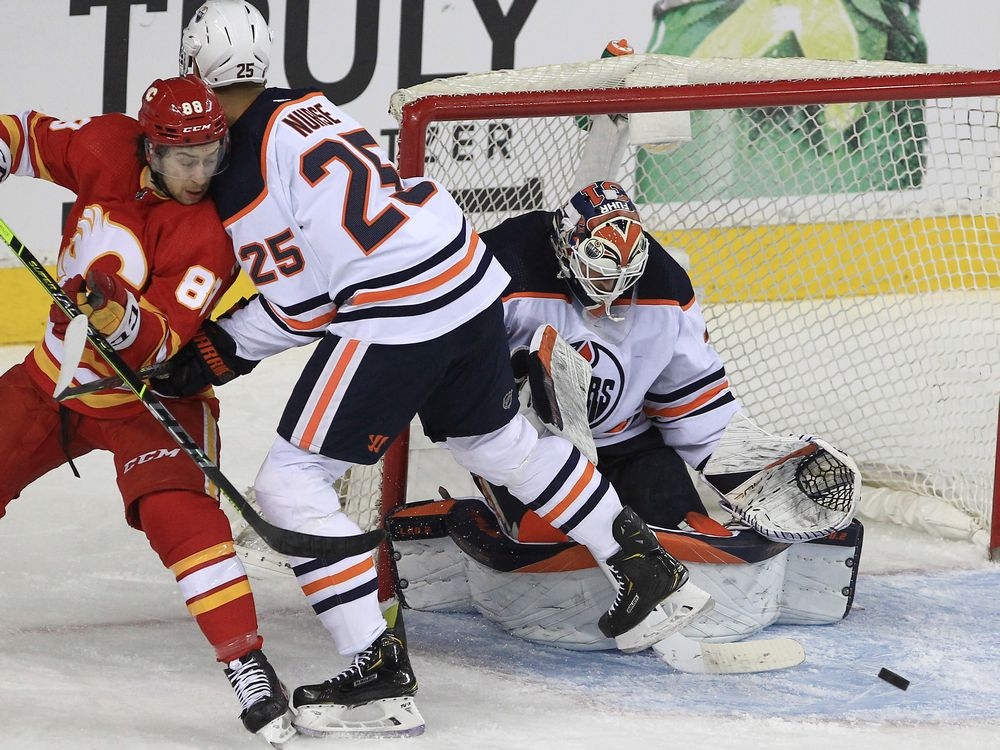 CALGARY — There are clearly no friends in the Battle of Alberta once the puck is dropped, but off the ice it’s all about humanity with the cancer-stricken Ben Stelter in the minds and hearts of both teams right now.

When the five-year-old Oilers fan posted a recent photo on twitter where he was dressed in an Oilers jersey playfully firing a nerf gun at Calgary’s Matthew Tkachuk, it brought a laugh from the disturber Tkachuk. After a photo of the ‘C’ of Red fans and mascot Harvey the Hound (remember when Craig MacTavish pulled out his tongue one night?) sending their love, Tkachuk filmed a video and sent it to Ben.

“Stuff like that is very close to me, dealing with stuff in Calgary with kids in similar situations,” said Tkachuk, who has followed Stelter’s journey for the last few months and the support he’s received from the Oilers and their fans.

“I saw the video of him shooting me in the head (with a Nerf gun), or pretty close to it, so I thought it would be good to make a video back, instead of just a picture.

“Obviously, it’s way bigger than hockey. It doesn’t matter who you are rooting for, we’re cheering him on. We know he doesn’t like us and that’s just what the game brings, but we’re all obviously thinking of him and his family. He’s a true warrior and we’re following him every step while he’s at the games.”

Calgary coach Darryl Sutter certainly has seen Tkachuk’s brother Brady, the Ottawa Senators’ captain, celebrating with every Flames win and he’s all for it.

“I don’t think we travelled to do it like Brady is but we certainly supported each other (from afar),” said Sutter, one of the six brothers to play in the NHL.
Duane and Brent won Stanley Cups with the New York Islanders. Their playoffs tended to last longer than those of Darryl, Brian and the twins Ron and Rich.

“If you were out, you were home this weekend to help Dad put the crop in for May long,” said Sutter. “Everybody always asks, ‘What did you say to your brother when you shook his hand?’ It was ‘who’s getting on the tractor Tuesday?’”

New York based Dan Rosen, who writes columns for nhl.com, says he was on radio with hockey-crazed folks from New Zealand Friday, talking about the Oilers and the Flames Game 2.

“Should be a cracker of a game,” they told Rosen.

LOOKING DOWN THE FISCAL ROAD

How the Flames are going to buck up to pay first-line wingers Johnny Gaudreau and Tkachuk with new long-term deals is the off-the-ice intrigue in this series.

Gaudreau, in the running for the Hart trophy and second in scoring (115 points) to Connor McDavid, is the best unrestricted free-agent on the market, and Tkachuk, who finished eighth with 104 points, is RFA. Both will be looking in the $9.5 to $10 million range.

The Flames have to move some money around. They definitely will try to move centre Sean Monahan’s $6.375 million (Arizona?) but he’s hurt now (hip surgery) and they will have to sweeten the pot to get the Coyotes to take him, like with former first-round draft defenceman Juuso Valimaki, who has fallen out of favour here.

They might not re-sign aggressive third-pairing D Nikita Zadorov, who’s making $3.75 million, too rich for his station on the Flames, or they might have to buy out the popular Milan Lucic, with one year left at $5.25 million.

Gaudreau, in his eighth year with the Flames, has remained above the free-agency fray.

“We tried to figure something out in the beginning of the year, it didn’t happen,” he said. “I don’t want to be talking to my agent every day. I said, ‘No, leave me alone,’ but he still calls me after games and stuff like that, just to pick my brain about the game.”

Oilers defenceman Darnell Nurse, playing with a core muscle issue which is limiting his ability to use his speed and battle like he normally does, is one of the three finalists for the King Clancy Memorial trophy along with Anaheim’s retiring captain Ryan Getzlaf and New Jersey blueliner P.K. Suban. The annual award salutes leadership on and off the ice along with noteworthy humanitarian work in the community.

Nurse is an ambassador for Free Play for Kids which helps marginalized kids, many of them refugees, indigenous youth or new Canadians play sports safely. He’s also an ambassador for Right to Play, which aims to protect and empower kids to rise about adversity through sport. He’s a strong voice, as well, with the league’s Respect Hockey initiative which promotes diversity and inclusion.

This ‘n that: Oiler winger Evander Kane isn’t a fan of hockey games that start about 9 p.m as Game 2 did. “More coffee for us (long-wait for the face-off) but I’ll still be having my pizza like I always do,” he said…Darryl Sutter won’t turn down his Jack Adams finalist nod but says “I’d take the Jennings (fewest goals allowed) over that every time because that means your team is a playoff team.”