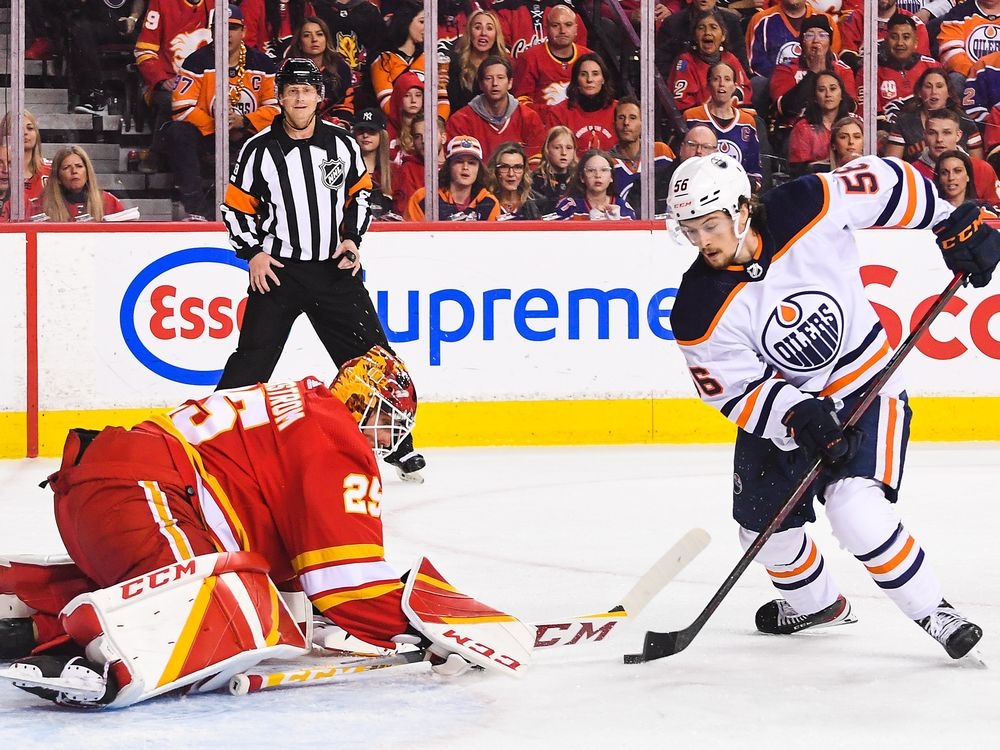 Admittedly, it wasn’t one of those bold go-where-no-man-has-gone-before pre-game prognostications, but the Edmonton Oilers sage Evander Kane offered up a salient take on Game 2 in the Battle of Alberta after practice.

“If we can keep them under nine goals tonight, I really like our chances to win,” said Kane, caught between a guffaw and a smile, as he met the media.

Well, after dropping a 9-6 laugher to the Calgary Flames in Game 1 Wednesday, which tied the NHL record for most goals ever in a playoff game, the Oilers got the first part of the equation right Friday, and mostly importantly the second with another out-of-this-world performance from Connor McDavid and two late strikes by Zach Hyman (shorthanded) and Leon Draisaitl for a stirring comeback 5-3 victory to even the series at a game apiece.

The Oilers, who gave up three in the first 6:05 in Game 1, driving Mike Smith to the bench, were down two again in Game 2 after six minutes but Smith hung in after goals by Michael Stone and Brett Ritchie. And the team, refusing to go quietly and madly into the cold Calgary night, overcame two disallowed goals by Hyman (quick whistle in a scrum) and Draisaitl (McDavid interference on Jacob Markstrom) and twice clawed back from two-goal deficits.

“Not an ideal start obviously but a huge battle back,” said Hyman. “We knew that we’re capable of it and we did it last game (tying it 6-6) but not the way we wanted to, I’d say. This time from Smitty onwards I think we shored up things defensively. We didn’t give them as much. I thought we earned our chances, got a couple called back, but still worked, earned our power plays and got back into the game, then won it.”

Won it in roller-coaster fashion, but that’s been the Oiler story for much of this season. Ups and downs. Bad 9-6 loss when they played with a laissez-faire attitude and a roaring comeback in Game 2.

The warm-all-over feeling was in large part because of Hyman. He pulled away while killing a Warren Foegele penalty, taking a pass from Ryan Nugent-Hopkins for the game-winner. He scored in the first period in a blue-paint scrum but referee Chris Lee blew the play dead, thinking the puck was frozen under Jacob Markstrom. He was then robbed by Markstrom in alone in the second, trying to slide it by him on a half breakaway. With a third opportunity, midway through the third, he went upstairs, off the crossbar and in.

“Nuge made a great defensive play to break it up and then I saw some ice, just took off and had a little half breakaway earlier so I didn’t want to deke, I just wanted to shoot it. I got a good shot off and beat him,” said Hyman, who wasn’t going to try the same second-period move. Once beaten, twice shy.

“He’s such a big goalie. He’s long and lanky and it’s hard to beat him across unless you get it up. So when you’re coming in with that much speed it’s hard to save it when you just get it off quick,” he said.

Draisaitl, playing on a sprained ankle, took a rim around the boards from Smith and it ended up on his stick for a breakaway 2 1/2 minutes after Hyman’s goal. Hyman wasn’t biting when asked about Draisaitl playing on one leg, but he had no trouble talking about his hands.

“Just an elite player,” said Hyman, after he played 23 minutes and had three points.

McDavid is elite squared, of course. The stats sheet says he only played 21 minutes but it seemed like 41. Maybe because he had the puck on as string all night long, holding people off, spinning off checkers, moving past people like they were orange cones not red-shirted skaters. He scored 32 seconds after the Draisaitl goal was wiped out when he wheeled through the crease and his skate hit Markstrom’s glove before Draisaitl banged it in–a take-that moment.

“You looked hungry to score there after the disallowed one,” a reporter asked McDavid.

He also assisted on Duncan Keith’s first Oiler goal with a one-handed pass and now has 20 points in the nine Oiler games (six in the first two against Calgary). The fastest guys to 20 in the playoffs did it in eight games (Wayne Gretzky three times, Mike Bossy once). But McDavid tied Mark Messier and Mario Lemieux at nine.

“Everybody who’s watching this … you don’t have to say much.,” said Hyman. “It’s just so evident. He’s the best player in the world and he’s pushing himself, and I said it before, when you’re the best, it’s easy to be comfortable because guys are chasing you.”

“But it’s hard to keep pushing and keep challenging yourself. And he’s a guy who wants to win more than anybody. So you’re seeing him push himself, push our team and those are the results,” said Hyman, who marvels at McDavid’s ability to stay in the moment.

“Connor stays so even-keeled, nothing fazes him. He’s just Connor. He’s humble and goes about his day.””

His play to Draisaitl for his second-period goal was erased by the refs, but the Oilers shrugged that off like the Hyman one that should have counted.

“On my play, just taking the puck to the net. I’m trying to get out of the way and Markstrom is kind of coming out at the same time,” said McDavid. “It’s the same old story (video review). You never really know.”

Smith gave up the early ones to Stone (screened) and Ritchie (rebound off an Erik Gudbranson shot he couldn’t hold on to), and a power play blast by Tyler Toffoli with Darnell Nurse without a stick because it was broken on the play. But, that was it as he made 37 saves.

‘Can’t say enough about him. He doesn’t have an A on his jersey but he’s one of our leaders,” said coach Jay Woodcroft, who applauded Smith’s ability to park a bad game and move on after Game 1 when he got pulled.

“Smitty’s just a battler, you know? He played great, made some big saves, and makes a big play there to Leo to spring him for his goal. So, a little bit everything from him tonight,” said McDavid.

Same story with Keith who became the oldest Oiler to ever score in a playoff game (38 years and 308 days). He also had assists on the Bouchard and McDavid goals in 18 1/2 minutes. This was Keith, like McDavid, willing the Oilers from the back-end.

“His presence comes through in big moments. Sometimes it’s something as simple as going by the bench during a TV timeout and just saying, ‘We got this take a deep breath and we’re good to go here,”‘ said Woodcroft. “I can’t say enough about Duncs. His resume is Hall of Fame worthy. He’ll be there one day. In terms of his ability to pass on his experiences to our group, I can’t say enough.”

The Flames, meanwhile, haven’t won a Game 2 of the playoffs since the Western Conference final against San Jose in 2004, 31 games and counting now. They had the Oilers by the throat, up 2-0 and 3-1 but they managed to get to Markstrom.

“He was really, really good for us. I think their individual skill stood out tonight in situations that they scored on,” said Flames’ coach Darryl Sutter.

Markstrom, one of the three finalists for the Vezina trophy, did make some 10-bell stops but also has given up 16 goals in the last three meetings (league play and post-season) to the Oilers. He isn’t rock-solid against them.

This ‘n that: Former NHL coach Bob Hartley, who has spent years over in Europe, told a Quebec radio show that unrestricted free-agent Oiler goalie Mikko Koskinen, has agreed to a contract for next season in Lugano in Switzerland …Because of all the penalties, the Oilers basically only used seven forwards with Zack Kassian and Josh Archibald getting four minutes and Jesse Puljujarvi, Derek Ryan and Foegele in the eight-minute range.