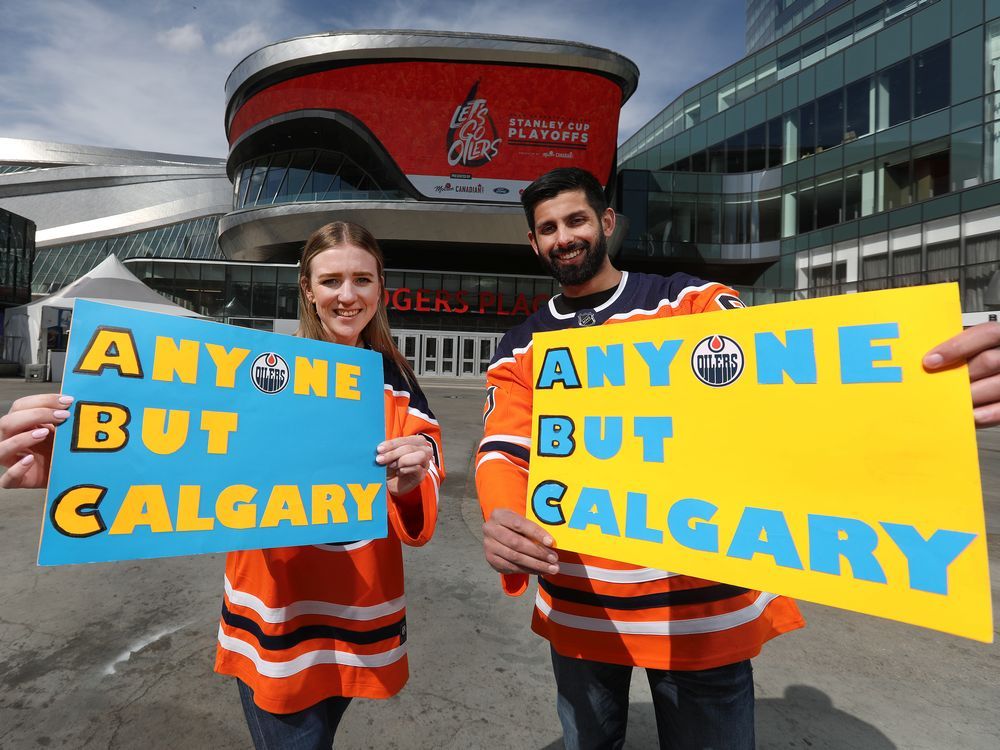 He was a newcomer to Edmonton in 1990 and was visiting family in Ireland that spring when he learned the Edmonton Oilers and Winnipeg Jets were going to Game 7 of their Smythe Division semifinal series.

“I needed to wait to fly from Dublin to London to check the London Times because that was the only paper that carried the hockey results,” he remembered.

Determined to witness the decisive match-up, White caught a flight back and landed in Edmonton at 5 p.m. the night of Game 7.

He arrived at Northlands Coliseum in time to see his Oilers complete their comeback from a 3-1 series deficit, downing the Jets 4-1 on the back of Mark Lamb’s game-winning goal to clinch the series en route to winning the team’s fifth Stanley Cup.

Thirty-two years later he’s still an Oilers fan, and says spectacles like the Battle of Alberta can improve mental health, especially amid the COVID-19 pandemic.

“We’ve had a lot of strife and emotional difficulty over the past two years,” White said.

“To have the opportunity to show a collective enthusiasm for one single goal is nothing but a positive thing for society.”

White says the psychological benefits of camaraderie and celebrations that accompany each Oilers playoff victory work to offset some of the strain felt over the past two pandemic-ridden years.

“It is wonderful for the community,” he said. “People have had a terrible time.”

And should the scoreline not go your team’s way? White has some simple advice: “Go for a walk.”

University of Alberta psychology researcher Christine Kershaw studies how groups interact with each other, including the Battle of Alberta participants.

She says Calgary and Edmonton have been competing with each other for generations and that this year’s all-Alberta playoff series is just the latest iteration of an ongoing contest between the two cities.

While competitions for things like infrastructure or corporate headquarters are often unrelatable or unimportant to many, she says sports provide a more tangible comparison that’s easily understood.

“I can cheer really hard for my team and that feels more like I can give something to them.”

A Philadelphia native more familiar with the rivalry between the Flyers and the Pittsburgh Penguins, Kershaw says contention can breed support inside each competing camp.

“Creating rivalries is the best way to improve relations within your group,” she said.

“Derogating people from other groups is one of the easiest ways to improve relations within your group and to improve identification with your group so people are more willing to do more for that group.”

While the Battle of Alberta rivalry both divides a province and unites a city off the ice, she says it can also push the two teams to perform on the playoff stage.

“Their rivalry only improves our chances of going to the final,” she said.

“What better motivation than people three hours away from you?”