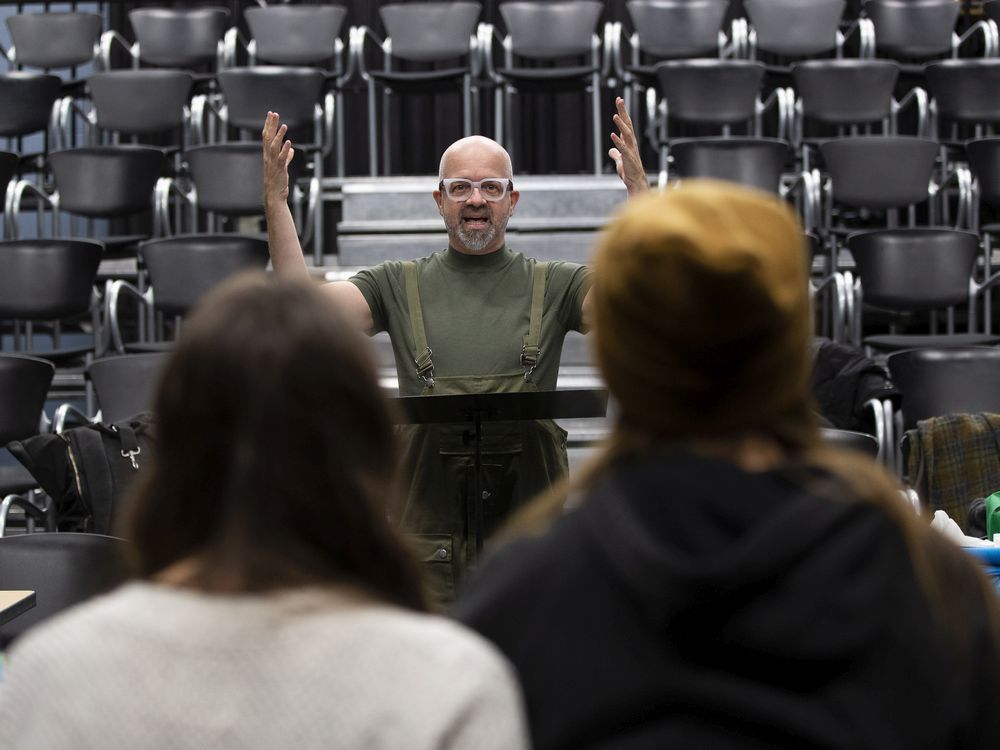 Observing the creative process at Northern Light Theatre is like walking into a particularly enchanting pop-up book.

Bursting from the middle of Studio Theatre is the stage — a wooden box upon which the two stars of the new musical Two-Headed/Half-Hearted perch to perform. To the side is a sort of kindergarten craft table strewn with paints, brushes and finds from the dollar store; it’s where director and co-creator Trevor Schmidt constructs a variety of props including creepy twin baby dolls, the kind with soft cloth trunks and eerily blank stares. At the heart of it all is Schmidt himself, who takes up his post before a music stand like the conductor that he is.

“Let’s go from the top of the show,” says Schmidt, for 20 years the artistic director at Northern Light and a true devotee of musical theatre.

It’s early days in rehearsal for this ambitious project, which combines the talents of Schmidt (who wrote the story and lyrics) and Métis artist Kaeley Jade Wiebe (who composed the music and is half of the cast). But already the musical’s moving premise and spellbinding songs are evident as co-stars Rebecca Sadowski and Wiebe meld their talents and their bodies to create the Hollis twins — girls conjoined at the hip, sharing a leg and a heart and a whole lot of humanity.

Schmidt has long been fascinated by conjoined twins (once known as Siamese twins after Chang and Eng Bunker were born in Siam, now Thailand, in the early 19th century). He’s not alone. Twins with awkwardly shared body parts have occupied a curious space in popular culture, not only on the vaudeville circuit in days of yore, but more recently as the subjects of reality television (remember TLC’s Abby and Brittany?) and on stage (a 1997 Broadway show featuring Daisy and Violet Hilton was revived in 2014).

But for Schmidt, this is more than a story about oddity. Although his work often elicits descriptors such as “quirky,” this story is about something that’s completely mainstream, and heart-breakingly relatable.

“It’s about the mythologies that families create for themselves,” he says wistfully. “And it’s about losing someone close to you.”

Two-Headed/Half-Hearted features two girls (or are they one?) called Venus and Juno, so named by their father Jupiter who constructs a backstory for the family that includes the premise that their mother is a mermaid (perhaps explaining why she spent a lot of time sick in bed, as mermaids do when wrenched from the sea). Jupiter keeps his girls cloistered at home, worried they’d be set upon by the gawking public if they stepped outside. But eventually, they become reclusive celebrities by singing on a radio program. When their parents die, Juno and Venus are forced to consider a life alone.

Kaeley Jade Wiebe created the music for Schmidt’s story, which he calls a Prairie gothic song cycle, or concert loosely connected by a “thin web of through-line.” A graduate of the University of Alberta’s bachelor of fine arts in acting, Wiebe, 23, has a growing reputation as a songwriter and performer. She’s been featured on Fresh Finds on Spotify and her song Painless climbed to No. 1 on the Indigenous Music Countdown charts. Her new single Ego has just been released.

Some bonds you can break, by choice or by fate, while some can’t be torn from the day you were born.

Wiebe met Schmidt through Nextfest director Ellen Chorley, who spotted the young talent at Nextfest — the festival for emerging artists held yearly at Theatre Network. Schmidt was looking for a fresh artist to showcase at Northern Light (whose mandate is telling stories about, and by, women).

“The sheer volume of work was daunting,” recalls Wiebe when asked what she thought of the commission, her first musical. “I put a lot of pressure on myself. I wanted it to be good and I don’t have a lot of background in music theory.”

But she dug in. The result of the collaboration is roughly 18 songs (roughly, because sometimes it’s hard to tell a song from a poem from a bit of connective narrative in Two-Headed/Half-Hearted). The lyrics and music vary widely in tone, ranging from vaudeville to lullaby. The 70-minute one-act has a strong country flavour, but it’s also true that Schmidt suggested Wiebe listen to “Appalachian murder ballads” (who knew?) as a source of inspiration. There’s a bit of bluegrass and folk, and some playful operatic riffs. The teal-blue costumes by designer Deanna Finnman are early Patsy Cline, another eye-catching feature of Two-Headed/Half-Hearted.

This variety in musical style serves to open the heart and mind to numerous interpretations of the story itself. Sadowski (who plays the dominant twin Juno) sees it as a “deep, dark coming of age story” that highlights the innate competition between sisters.

“What you think you want, isn’t what you need,” she posits as one theme of the story.

Certainly, the songs in the musical, whether a ballad-esque tale of longing or a catchy number that made me want to two-step, inspire a multitude of reactions. Audiences are invited to find their own meaning in this new work.

The line below, found in a tune from the show’s opening minutes, is but one example of the musical’s wide resonance.

“Some bonds you can break, by choice or by fate, while some can’t be torn from the day you were born.”

Conjoined twins are highly unusual, but Two-Headed/Half-Hearted creates an entire world of common ground just waiting to be opened and explored.