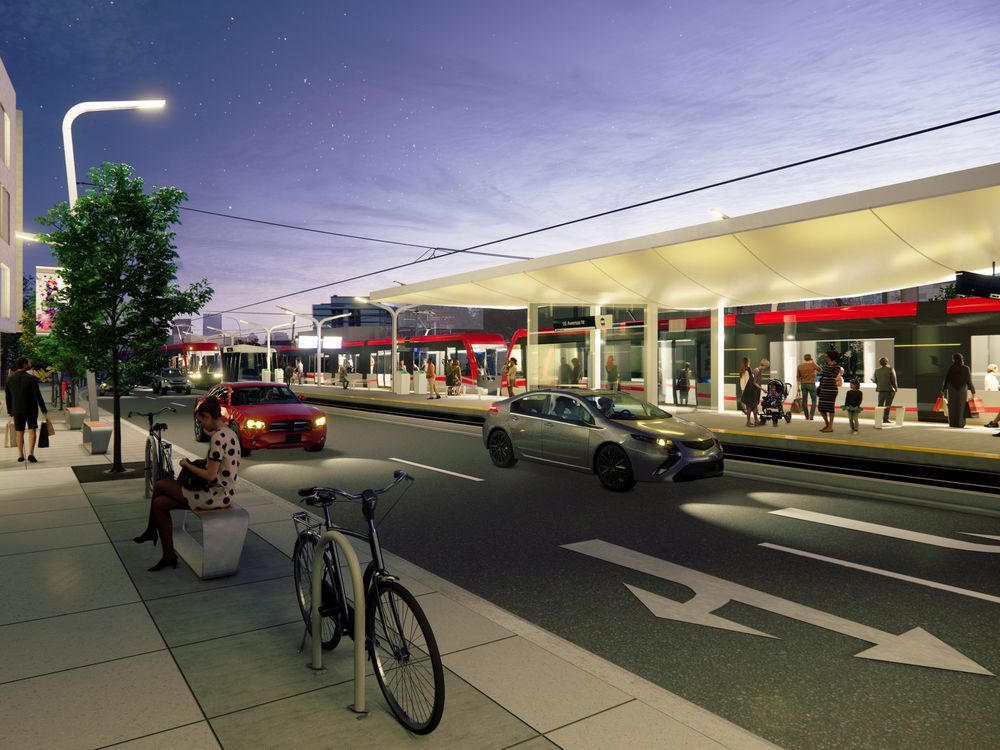 If it was called the Black Line, the Blue Line or even the Bright Pink Polka Dot Line, we might cling to some semblance of hope. But no, once anointed with that saintly colour green our fate was sealed.

Because, no matter how much the world has changed — and, boy, it’s changed a lot these past few years — one thing remains constant: when Calgary city hall gets its collective eyes fixed on some mega-project, then hell and high water are unlikely to deter them ploughing ahead.

And, if such a project is also adorned with that globally recognized environmental hue, then the outcome becomes as inevitable as an eventual Grim Reaper meeting.

So, unless sanity emerges amongst those still-newish members of council, we’re on a collision course with financial Armageddon, given the past, present and future debacle our most expensive civic project — the Green Line — is becoming.

The past is a horror show, which even the most adamant supporters of this transit line can hardly dodge. Half the track for the same cost sums it up in a nutshell. (Nuts being a suitable image.)

Presently, we’re spending money hand over fist prepping the various areas this line will go through, though not a metre of track is yet laid. However, every hundred grand spent adds pressure to continue — hey, we’ve gone this far, let’s keep going — being the constant modus operandi of those spending other people’s money.

Still, there are those less cynical (thankfully). Yes, some folk, many forming the backbone of this city’s business and governmental expertise, are determined to stop this journey towards the cliff edge by re-engineering the project into something more realistic and affordable.

Up steps Jim Gray. Smart as a dart, blessed with an energy and determination those a third of his age would envy and — most importantly — a man desiring the best for the city he loves. (The long-time oil guy’s as tough as nails but, approaching 90, he won’t carry the future financial burden, which will be the Green Line’s legacy. So, he isn’t in it for himself.)

So, Gray and his ‘rethink the Green Line’ citizens’ committee, are pushing to re-evaluate the project, having just collected 500 signatures from prominent Calgarians across private and public organizations, all of them desiring a thorough public review of the line. These names will be presented to council, once civic budgetary matters become central after the summer break.

They reckon time is of the essence, given the ongoing spending, and hope council is pushed into a thorough re-examination before more money’s sunk, thereby increasing pressure to proceed regardless. They deem this a debacle to Calgary’s financial future with a final price tag of up to $20 billion.

Now, these people have more engineering, geological and financial acumen than me by a country mile. But I do possess an inkling of what drives politics and folk thigh-deep in that particular wading pool.

So, here’s a cheat sheet for those current council members who had no hand in initially approving this potential albatross.

First, inflation is rampaging. That alone blows any previous cost estimates to smithereens.

Second, as a result of such inflation, borrowing money is much more expensive. And we’ll need to borrow lots.

Third, life has changed. So many still work from home that travelling via transit downtown is far less imperative or welcoming than it once was. Also, when this line was first proposed, downtown vacancy rates were in single figures. Today, they are well over 20 per cent. In short, do we even need it?

Fourth, and most importantly, in three years the next civic election rolls around. Ignore this opportunity to question the Green Line and today’s newbie councillors can’t simply pass the buck backwards to those who first gave this the nod. Nope, you’ll be deemed complicit, just as you troll for votes again.

No doubt Jim Gray’s group has much wiser arguments than mine. But Point 4 might still be the best hope for salvation.

Chris Nelson is a regular columnist for the Calgary Herald.