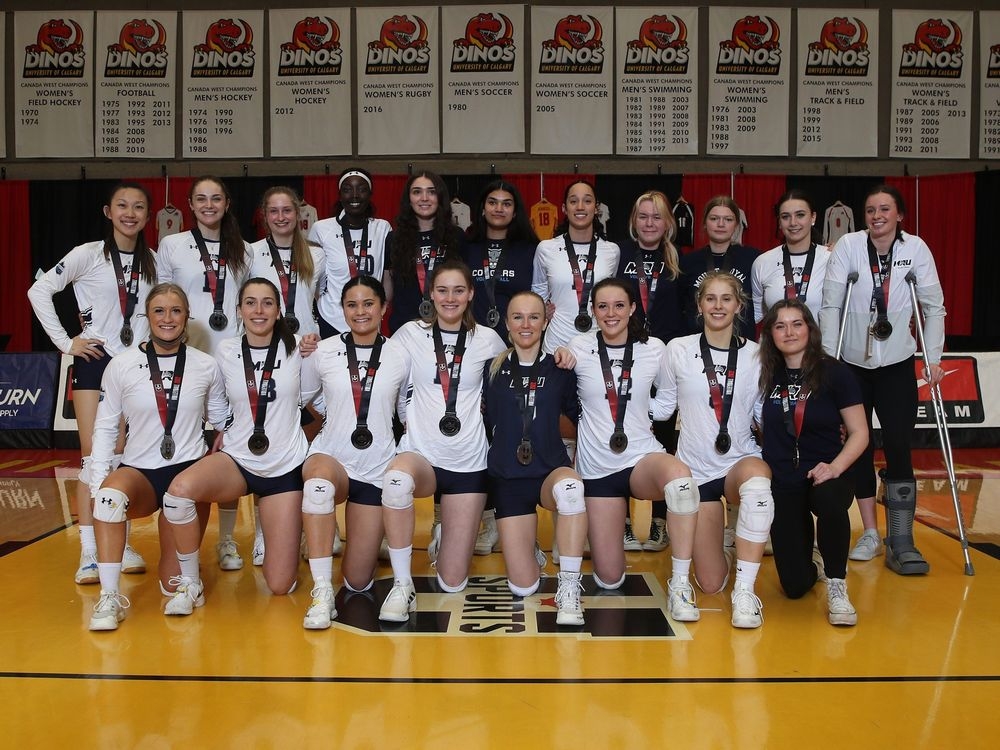 There was no room for tears from the Mount Royal Cougars.

They were too full of pride to allow for such nonsense after a fierce effort at the U SPORTS Women’s Volleyball Championship at the University of Calgary.

Unfortunately, the gutsy Cougars came up two sets shy of the crown, dropping the gold-medal match to the top-ranked Trinity Western Spartans on Sunday evening at Jack Simpson Gym.

“Honestly … we’re just really happy with how this turned out,” said Cougars star Quinn Pelland, wearing a big grin — and a silver medal around her neck — just moments after the 3-1 (25-14, 14-25, 25-19, 25-20) to wrap up the school’s first foray at nationals. “Obviously, it’s not a win — and we wanted that. But at the same time, I think we worked really hard. I think we banded together really well.

“We’re just really proud of how far we’ve come and what we’ve done for the program.”

They certainly should be.

Coming in as the seventh-ranked team after finishing as the Canada West bronze medallists a week earlier, the Cougars stood up against and smacked down the Ontario-champ Brock Badgers on Friday and the traditionally powerful Alberta Pandas on Saturday. The Calgary crew swept both of those matches to set up Sunday night’s winner-take-all finale in front of a loud MRU-partisan crowd at The Jack.

What followed was a sharp display of volleyball, with long, tense rallies that had fans rising up from their seats throughout the match.

The Spartans came out strong, proving their worth as the No. 1-seeded side to put up a 25-14 win in the first set.

But the Cougars didn’t roll over in the second set, using an early seven-point run — powered by two kills from outside-hitter Maddison Marshall — to turn the tables on the Spartans. A block by Cougars Faye Murray and Haley Roe sealed the win with the same 25-14 score as the first set.

Momentum, however, swung back the way of the Spartans in the third set as they scored six straight mid-set — with Savannah Purdy setting up five of those points — to capture a 25-19 win and put the Cougars in a must-win situation.

With that, they went to work, trying to force a fifth set.

In the fourth, MRU grabbed 6-of-7 points on a run to put them up 15-12, with talented middle Nyadhoi Thokbuom driving two kills, including one from the back-court that sent the fans into a frenzy. But the Spartans stuck around, finding enough on the attack to climb back into the lead — at 19-18. The Cougs got one back on a timely Thokbuom block, but the Spartans powered their way to five of the final six points to earn the title.

“They played fantastic, and they earned it,” said fourth-year Pelland, who was named a tournament all-star. “They were just ahead of us a little bit too often — we kind of were on our toes and were on the defensive a little too often. They deserve to be No. 1.”

Pelland herself had a team-high 29 assists, while Thokbuom closed with a game-high seven total blocks for MRU.

Outside hitter Roe, who was also named to the all-star squad, had a game-high 15 kills and a MRU-best 12 digs, while fellow fourth-year veteran Marshall also had 12 digs in the loss.

On the other side, Trinity Western was powered by Purdy’s 13 kills, Olivia Heinen’s 36 assists and Emma Gamache’s 14 digs. Tourney MVP Avery Heppell had 11 kills and a game-high seven blocks.

“But I’m so proud of this team. Obviously not the outcome we wanted. We fought so hard, and we did our best that it’s so incredible. It’s just a great feeling. It’s our first nationals. To get this far is just amazing.”

“Definitely next year — we’re coming for that banner.”

The Calgary Dinos came up short in trying to bring home a medal from the 2022 U SPORTS Men’s Volleyball Championship at the Investors Group Athletic Centre in Winnipeg.

As a team, the Vert & Or recorded a .297 hitting percentage in the match, while the Dinos posted a percentage of .293.

Sherbrooke came into the weekend ranked No. 5 and defeated the OUA silver medallist Toronto Varsity Blues, in their quarter-final match up 3-1. The Vert & Or were forced to play for bronze after a straight-set loss to the Trinity Western Spartans in the semifinals before the win over Calgary to secure a third-place finish, their first national medal since 1978.

Calgary began with their tournament with an upset victory over the No. 2-ranked McMaster Marauders in four sets. The Dinos were defeated 3-1 in the semis by their Canada West rivals from the University Alberta. The loss to Sherbrooke means they are the fourth-place finishers.

— With files from Postmedia news services