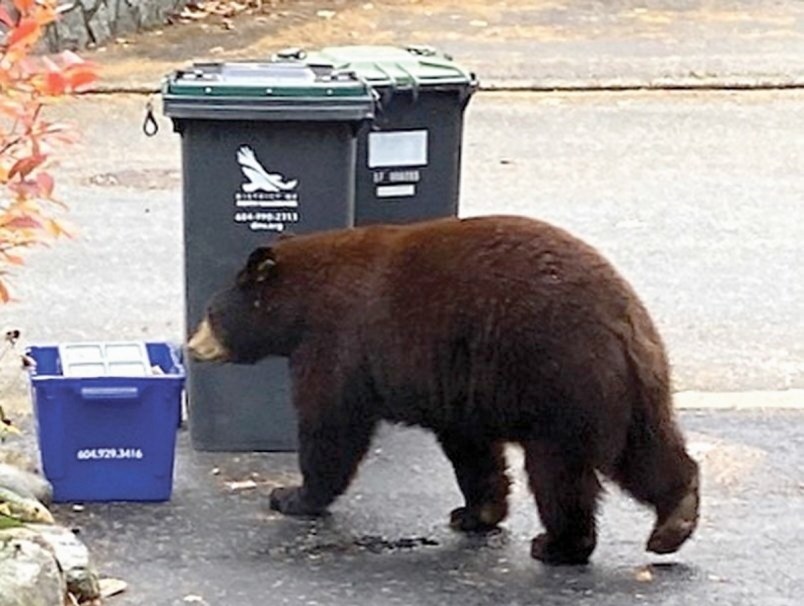 Police initially said the bears would be relocated, but the animals were put down.

A black bear sow and her two cubs captured in a Nanaimo neighbourhood were euthanized after being taken away by B.C. Conservation officers on Saturday.

Nanaimo RCMP and conservation officers were called to the area of Moyse Crescent and Blythe Avenue near Nanaimo Regional General Hospital mid-afternoon on Saturday after a report of bears in the area.

The mother bear was tranquilized and the cubs were taken away with her. Police initially said the bears would be relocated.

But when conservation officers told the provincial wildlife veterinarian about the bears’ condition and said they had been found eating garbage, the vet determined the animals were not candidates for relocation, the Conservation Officer Service said.

Reports had come in more than a month earlier about the bears in that neighbourhood, it said.

The bears were euthanized, then taken to the vet, who examined them and found garbage, including paper towels, pasta and tinfoil, in the animals’ stomachs.

The sow likely followed the Millstone River into Bowen Park to protect the cubs from being killed by adult male bears during mating season, the conservation service said. “Unfortunately, they gained access to garbage and compost repeatedly.”

Because it was a sow with two cubs, a live trap could not be set in the residential area in case only one cub was captured alive, which could have led to the sow becoming agitated and aggressive to anyone or anything that came close to the trap, the service said.

Bear reports have been spiking in Nanaimo. A total of 246 reports about bears have come in so far this year, far exceeding the 31 last year and 24 the previous year, the conservation service said.

The service said it’s important for people to keep garbage and compost bins in a garbage or shed, or arrange with the collection service to get a bear-resistant bin.

“Bears will continue to come in and around communities — if the garbage and compost is not secured, this will happen again,” it said.

“COs do not want to euthanize bears.”

The City of Nanaimo, Nanaimo Regional District and the Conservation Officer Service issued a notice in 2021 telling residents not to leave garbage out the night before collection, noting that every year, hundreds of bears are destroyed due to human-wildlife conflicts.

The Environment Ministry issued a bear advisory in May.

North Vancouver’s Ellie Lamb, who teaches bear behaviour and safety and works as a guide to viewing bears in northern B.C., argues the province should have relocated the animals, saying they are intelligent and need to learn territorial boundaries.

If they returned, they could have been moved again, she said.

A strategy is needed to define human territory to bears, said Lamb. It can start with someone inside a home speaking in a firm voice to a bear in the yard, move on to throwing rocks, and then firing some bear spray.

She also said that the sow had a sore leg that she believes would have healed on its own.