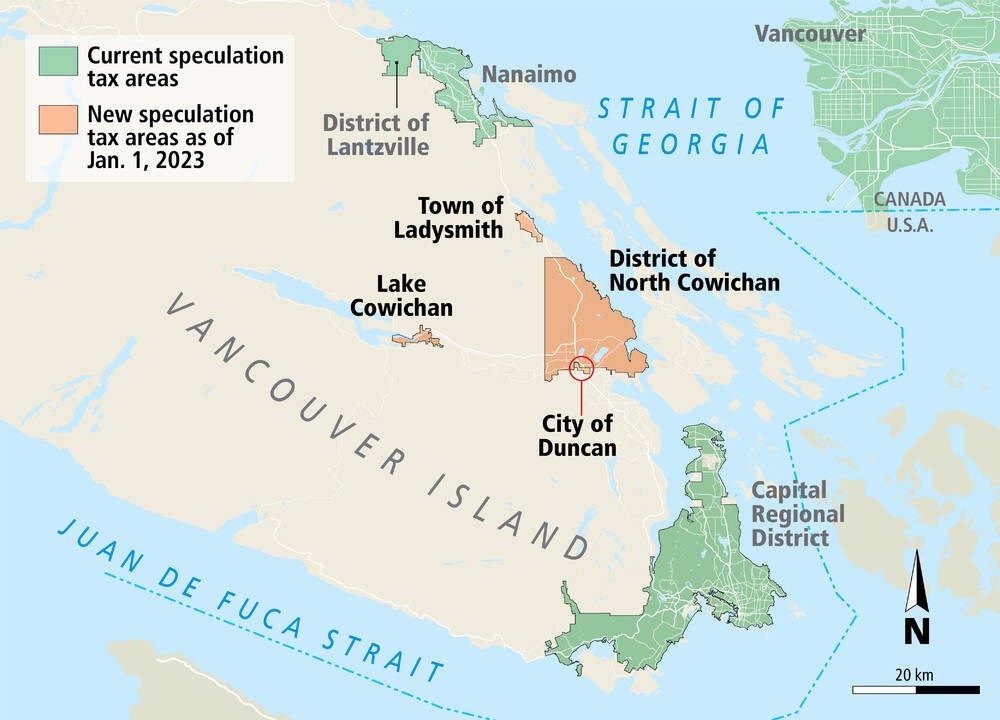 The expansion of the speculation and vacancy tax to include six new communities is being welcomed by the mayors of four Island communities facing a housing affordability crisis.

The mayors of Duncan, Ladysmith, North Cowichan and Lake Cowichan embraced the province’s announcement Wednesday that some empty homes in their communities would be subject to the tax starting in January.

“I think it was needed. I think that in seeing the disproportionate upward pressure on [house] prices and reduced availability without having that speculation tax, this is the right move,” said Ladysmith Mayor Aaron Stone.

The tax, introduced in the February 2018 budget, was ­created to reduce the number of empty homes in the province and help deal with B.C.’s shortage of affordable housing by encouraging owners of vacant units to rent or sell them.

The tax rate is two per cent of a property’s assessed value for foreign owners and satellite families and 0.5 per cent for Canadian citizens or permanent residents.

Owners are exempt from the tax if it is their principal residence, they rent it at least six months of the year, they are disabled, the property was just inherited, it’s valued at less than $150,000, or a person was away and it was vacant due to medical reasons, residential care, work or spousal separation.

Stone and North Cowichan Mayor Al Siebring were part of a group that asked the province to make the move, as their analyses showed being close to the Capital Regional District and Nanaimo, where the speculation tax already applied, was having a real effect on the housing market in their communities.

“It was pushing that extra pressure into the Cowichan region, where there was already an extreme lack of affordable housing,” said Stone. “It’s a crisis across Vancouver Island, especially south of Campbell River.”

Siebring noted the percentage increase in house prices in the Cowichan region was outpacing the increases in Victoria and Nanaimo.

“Our values have been going up more quickly and they both have the spec tax,” Siebring said, noting their message to the finance minister was that the tax seems to be working to help temper the rise in housing prices in the larger cities, so why not expand to include the smaller ones?

“I think it’ll just level the playing field in the long term,” said Siebring, adding it sends the message that if you’re going to buy a home on southern Vancouver Island, you won’t be able to let it sit empty.

“If you want to come here part-time and live, that’s fine, but [if it’s empty] you’re going to have to rent the place out. You’ve got to provide housing for people. You can’t just let it sit there.”

According to the province, less than one per cent of British ­Columbians have to pay the tax, which applies largely to foreign owners, satellite families (where the majority of their worldwide income is not declared on a Canadian tax return), Canadians from outside B.C. and other non-B.C.-resident owners.

In its announcement Wednesday that the tax would also be expanded to Squamish and Lions Bay, the province said an independent review of the tax concluded it worked to keep housing prices and rents lower than they would have been.

The province says the tax has encouraged the return of approximately 20,000 condo units to the long-term rental market in Vancouver.

“In 2018, we implemented the landmark speculation and vacancy tax that targeted speculators and quickly helped turn thousands of empty units into homes for people,” said Minister of Finance Selina Robinson.

Sonia Furstenau, leader of the B.C. Greens and MLA for Cowichan Valley said she was pleased to see the expansion. “Addressing this crisis requires a variety of policies targeted at both supply and demand, and the data on the impact of this tax so far is encouraging,” she said.

Furstenau added, however, that the tax is not a “silver bullet,” and the province needs to increase housing supply, especially non-profit and co-op housing, and encourage municipalities to enact zoning for higher densities.

Green MLA Adam Olsen added that he was disappointed the Southern Gulf Islands were not included in the expansion.

Duncan Mayor Michelle Staples said the expansion will help increase the number of housing units available in the area, but does not appear to apply to the unincorporated areas that make up a large majority of the homes used for recreation in the region.

Lake Cowichan Mayor Bob Day said as a destination community with many properties being redeveloped to rent out to vacationers, they need all the help they can get when it comes to housing supply.

He said the Airbnb effect on housing stock has meant many local businesses are having trouble finding workers, who have been priced out of the region. “There’s not much out there for the modest income in the area.”

Siebring has the same problem in North Cowichan, noting a lot of people are living in recreational vehicles, while some well-paid executives are living in Airbnb units because they haven’t been able to find anything to buy.

“It’s definitely a housing crisis and that’s not an exaggeration,” he said.

The expansion comes into effect Jan. 1.