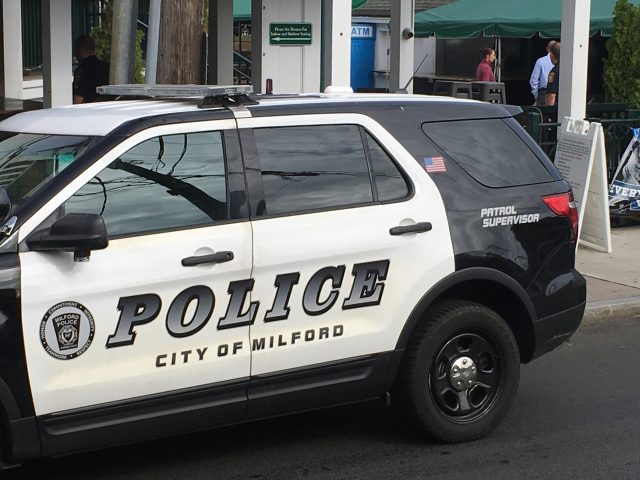 MILFORD, Conn. (WTNH) – Crisis negotiators in Milford spent all Saturday talking with a man who boarded himself in his house, threatened to kill police and eventually surrendered around 11:00 p.m. that night.

Around 4:30 a.m. Saturday morning, Milford police responded to a routine noise complaint. People reported that the homeowner of 112 Home Acres Avenue, 51-year-old John Katrick, was blasting loud music from a speaker stationed in the driveway and was disturbing the neighborhood. Katrick turned off the music once police arrived, but he refused to speak to them. He was issued for causing a public disturbance.

Police returned a little less than four hours later a 8:00 a.m. on reports that Katrick was burning car tires in his front yard. He threatened to kill the officers if they trespassed on his property. Police attempted to continue the interaction, but Katrick retreated inside his home.

The fire did eventually extinguish on its own but law enforcement remained on scene to address the danger of the fire and his threats. Soon after, police believe they saw Katrick put a rifle against his window. Katrick removed it a few minutes later. He then drew all of the shades on the windows. Police made the decision to establish a perimeter and asked people who lived on the street to evacuate or shelter in place.

For the next several hours, a crisis negotiation team attempted to make peaceful contact with Katrick. He refused to cooperate and remained in his residence. Around 8:00 p.m., officers on the scene believed they heard a gunshot in the residence. Fearing for his welfare, they deployed a drone to gain a different vantage point into the windows. This was unsuccesful.

Then, police deployed a robot, sending it to the back door. As the robot was sent in, members of the Special Response team encountered Katrick and negotiated his surrender. Finally, at 11:00 p.m., he was taken into custody in good health. He was then transferred to St. Raphael’s for an emergency mental health evaulation.

One he was removed, the Special Response team performed a sweep of the house. They discovered an amateur “booby-trap” that was designed to potentially injure officers. The team describes it as “various affixed knives”.

The inside of the house was also reported to be in extreme disarray. Detectives continue to be on the scene as they search the residence.