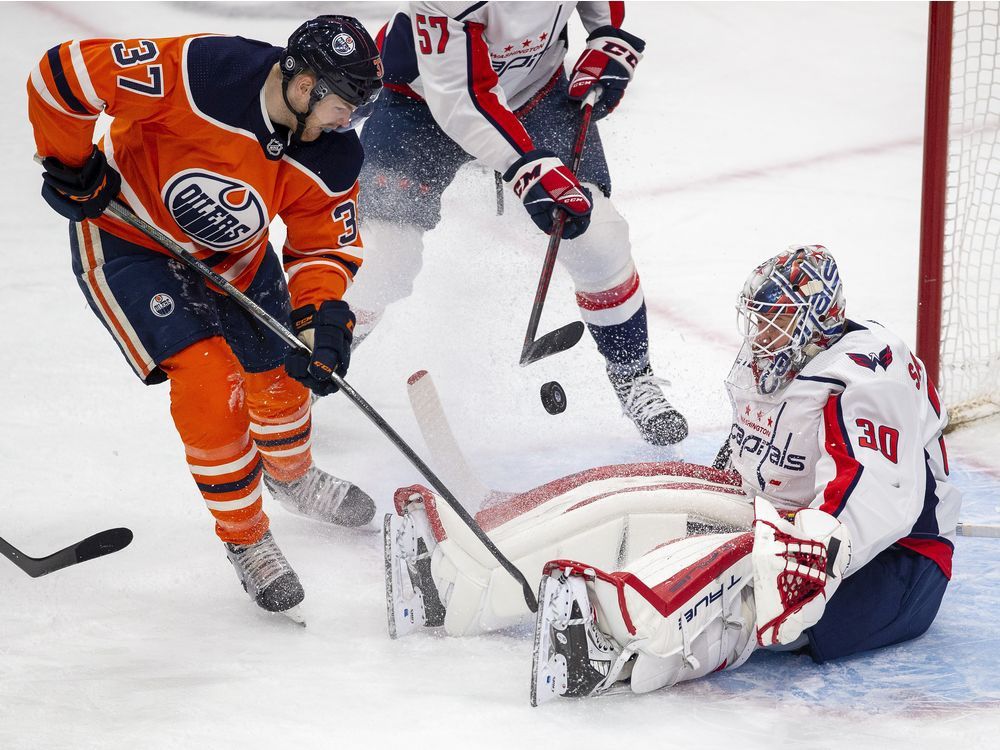 With the wheels now in motion for the extensions of right wingers Jesse Puljujarvi and Kailer Yamamoto, whether by negotiation or arbitration, let’s take another run at parsing the salary cap headache that faces Edmonton Oilers GM Ken Holland.

We’ll do so by projecting a 22-man roster, breaking it into 2 distinct sections.

In this version, the Core 12 includes no fewer than 10 players who are signed for at least 2 more seasons (orange background), each of those pacts signed in Edmonton with a total value in the 8 figures. (Technically, Connor McDavid‘s is a 9-figure deal, but you get my drift.)

Holland of course inherited McDavid and Leon Draisaitl, contracts and all, but the other pacts currently on the books are all his own doing. A couple were extensions of long-term Oilers (Ryan Nugent-Hopkins, Darnell Nurse) with the other 6 all being acquired by Edmonton within the last 2 seasons. Of those 10 signed players, each is at least 25 years old and a veteran of at least 5 NHL seasons. This is very much Ken Holland’s core group, and an experienced one at that.

The other 2 slots, both of them on right wing, are the players currently in the arbitration pipeline (yellow background), namely Puljujarvi and Yamamoto. The club has indicated its commitment to both via qualifying offers, and they exercised their right by filing for arbitration.

For the purposes of discussion, we are projecting an even $3,000,000 award in each case, a middle-of-the-road guess which should be within a few hundred thousand either way.

We include this category next, because it is sunk cost. Absolutely nothing the Oilers can do but pay the piper for the mistakes of the past, a figure that reaches slightly more than $5,000,000. Just like that, there’s under $10,000,000 left to cover off the rest of the roster.

Smaller dollars and shorter commitments here: 3 players signed through 2024, 6 more for just 1 more season (blue background), 1 unresolved contract in the person of restricted free agent Ryan McLeod, who we are projecting at an even $1,000,000.

While there are a number of low-cost if not outright bargain contracts in this group, the projected salaries are not contained within available ~$10,000,000.

One contract stands out here: that of left winger Warren Foegele, a bottom 6 winger who has 2 years remaining at $2,750,000 per. The other 9 top out at the $1,250,000 ticketed for veterans Derek Ryan and recently signed Mattias Janmark, and collectively average below $1,000,000.

For bookkeeping purposes we’ve both added in and then subtracted back out the cap hits of Oscar Klefbom and Mike Smith, both under contract for 1 more year but destined to spend it on Long Term Injured Reserve.

The key number here is the one in red at the very bottom. Accepting at face value the estimated contract values of the 3 unsigned players, the Oilers will be over budget by nearly a million and a half dollars. So corners have to be cut.

By all accounts the Oilers have absolutely zero plans of moving on from Yamamoto or McLeod, so let’s write them in the final roster in pen, yellow backgrounds and all. They’re not going anywhere.

The same sources suggest that Puljujarvi is not on such solid footing, and remains subject to being traded whether before or after his contract situation is resolved. To replace him with a player — ideally a natural right winger — in the $1 to $1.5 million range would be a way to resolve the cap crunch, though it would leave the starboard flank undermanned. One possible option would be to switch Zach Hyman from his preferred left wing to his natural right side, but that would create a new hole in the top 6.

A second option would be to move on from defenceman Tyson Barrie. The astute reader may have noted that I included Barrie in the Core 12 group above, but he’s the one guy in that group who is most susceptible to internal competition, namely Evan Bouchard who is shown above as being a depth player. Bouchard’s Entry Level Contract makes him an affordable alternative, even as his $850,000 bonus is not (directly) shown. Indeed, the case can be made that Bouchard (43 points) and Barrie (41) were already neck and neck a year ago. We already examined Barrie’s situation in some detail in this post, noting in the process that his departure would potentially open a hole at right defence. The Oilers currently have no NHL-ready alternatives beyond the 3 shown.

Perhaps the cleanest option available to Holland is the final one, namely Foegele. Acquired via the trade route last summer, the then-RFA was subsequently signed to a 3-year deal with an AAV of $2,750,000. As noted above, that is more than double any other pact among the identified depth players.

With ice time of 12 minutes a game at even strength and little responsibility on either special team, “depth player” is the best description of Foegele. He was a bottom-sixer for all but a few games in 2021-22, with his most common linemates being Derek Ryan, Zack Kassian and McLeod. Only with the latter did he really click.

As the player card shows, Foegele had decent underlying numbers. His shot shares north of 50% are a rare feat for an Oilers bottom sixer, and not to be lightly dismissed. Alas, those positive results didn’t quite extend to the all-important goals category, where the Oil were outscored 37-43 (46%) on his watch with a traditional plus/minus of -9. On the bright side, after recording a miserable -15 under Dave Tippett he was +6 after the mid-season coaching change.

Foegele’s regular-season boxcars of 12-14-26 were pretty much bang on his career averages, which now stand exactly 1 point every 3 games, evenly split between goals and assists (282 GP, 47-47-94). He’s scored exactly 10 even strength goals in each of his 4 big-league campaigns. Takeaway: he is what he is, a meat-and-potatoes worker bee on the bottom 6.

Alas, as worker bees go, he’s expensive. He also happens to play a position that is well stocked with good options. Hyman and Kane are set in the top 6 for the foreseeable future, while youngster Dylan Holloway joins a group of LW candidates that includes Janmark and utility man Devin Shore.

Squint at the roster a certain way, and the freshly-added Janmark stands out as a possible replacement for Foegele. The newcomer represents a cap savings of $1,500,000, pretty close to the amount needed to become cap compliant. He’s a little more experienced and scores at a slightly higher rate.

Foegele has his own charms: he’s durable, plays a robust 2-way game and is hard on the puck even as he’s not overly creative with it. He did show some real chemistry with McLeod later in the season. However, his performance in the post-season was disappointing. In 13 games he recorded just 0-1-1, -5, and found himself in the press box for 3 games after being the only Oiler to play all 82 during the season.

At a lower price tag he would be a lock for the foreseeable future. At this one? He’s vulnerable, even as the trade market might be a tough sell at that price. To have to include a spoonful of sugar to move on from the player just a year after acquiring and then signing him would be a tough pill to swallow, but at some point Ken Holland will have to take his medicine to make his club cap-compliant.

Of the 3 identified options, Foegele’s position at LW is by far the deepest, and that may prove to be the determining factor.

STAPLES: Might Oilers be in the hunt for Patrick Kane?

McCURDY: Is it best to hold to hold on to Tyson Barrie?

STAPLES: Puljujarvi a weak passer who should be traded? Not so fast