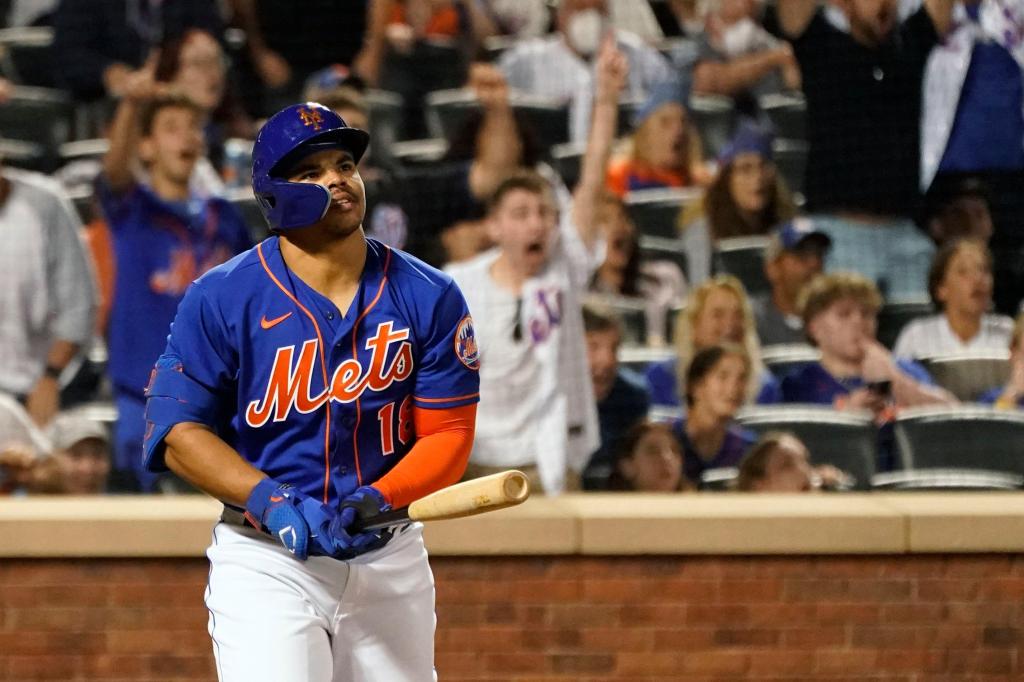 Nick Plummer will remember exactly one moment from his first big-league start.

The Mets’ hero of the night hadn’t recorded his first major-league hit before the ninth inning of the Mets’ 5-4 win over the Phillies on Sunday. And he sent Phillies reliever Corey Knebel’s first pitch to him that inning into the abyss to tie the game, sending it to extra innings.

The Mets won in the bottom of the tenth inning, off of Eduardo Escobar’s walk-off double, sweeping the three-game series.

Plummer, whose walk up song is affectionately the theme song for Super Mario, was celebrated with the tune from the game that appears when Mario saves Princess Peach, after he hit his home run.

Coincidentally, the last Met to make his first big-league hit a home run was Jeremy Hefner—now the team’s pitching coach—who did so exactly ten years ago to date.

It was enough to hype up the drained Citi Field crowd and the Mets, who, just the inning prior, looked to be heading for a loss.

Reliever Adam Ottavino came in for Joely Rodriguez in the eighth inning with a two-run lead, two runners on first and second and two outs. Ottavino then gave up a lead-changing, three-run home run to Nick Castellanos, off a 96 mph four-seam fastball, erasing all the work the Mets offense and Chris Bassit did to start and carry the game. Two of those runs were added to Rodriguez’s earned run total on the night.

The Mets (32-17) were getting the hits, and they put forth the quality starting pitching to match. All that, plus a Phillies (21-27) defense that’s struggled more than it hasn’t as of late.

To recap just the first inning of Sunday’s night cap, Bassitt needed 12 pitches to retire his first three Phillies. The Mets first three batters in the lineup, Luis Guillorme, Starling Marte and Francisco Lindor, each scored in the bottom of the inning in amazin’ fashion.

Guillorme first cranked a hard-hit double, off ex-Met Zack Wheeler, to the left field corner to get the rally going. Marte followed with a single. Lindor hit what should have been an easy grounder to turn a double play, but what actually played out was a bunch of hesitating by the Phillies that ultimately ended with a throwing error home, allowing Guillorme to score. And Lindor was able to reach base safely on a fielder’s choice.

The Phils’ confusion continued when Pete Alonso hit what should have been a regular flyout to right. But even with Castellanos, Rhys Hoskins and Jean Segura all chasing it down, the ball was able to fall to the ground for a single to load the bases. Even Alonso looked surprised his hit was not caught, all the while the crowd’s increased oo-ing and oh-ing as the ball descended seemed to foreshadow the play before it fully came to fruition.

Escobar and Mark Canha’s back-to-back grounders plated the second and third runs. Those three runs were all the Mets would have needed—at least until the eighth inning—even after Bassitt’s rough third inning.

Bassitt’s early career as a Mets starter has not gone unnoticed.

It’s had its highs, like the four wins and one no decision he picked up in which he did not allow more than one run to score on his watch in those games.

And it’s had some tough lows, like the two losses plus two more no decision games in which he gave up three or more earned runs. The worst of those outings came in San Francisco against the Giants on May 24, when his ERA shot up to 3.91 after giving up eight earned runs on eight hits.

He’s still played a big part of five Met wins. Sunday certainly was a welcome rebound for Bassitt from his last brutal outing in San Francisco.

Bassitt retired six of his first seven batters before loading the bases on a double and back to back walks in the third inning. The Mets bailed him out by turning a double play on Alec Bohm’s grounder, which still allowed one runner, Odubel Herrera, to score. He got out of the inning after walking one more batter, Bryce Harper, and striking out Castellanos.

He walked off the mound not pleased with the last series of events, but breathed a sigh of relief that the inning was over and the damage was kept to a minimum.

The Phillies made Bassitt work, but he was able to finish with just the one earned run on two hits with three batters walked and seven strikeouts over six innings.