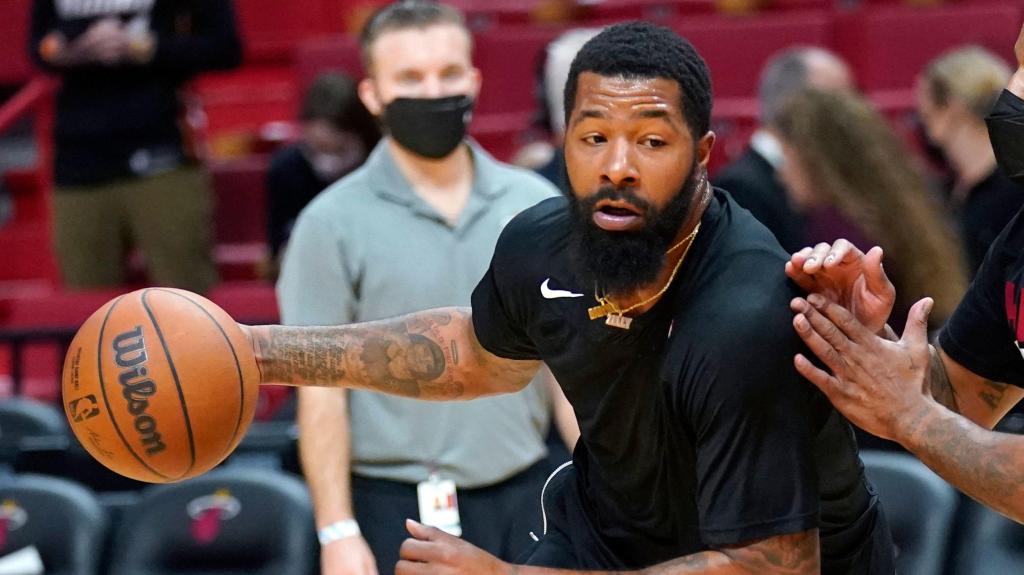 Although the Miami Heat appear committed to finding time in their playoff rotation for guard Victor Oladipo, that might not prove to be the case with veteran forward Markieff Morris, as the two return from lengthy absences.

Asked if Morris not playing in Saturday’s 110-95 loss to the Brooklyn Nets at FTX Arena was a factor of the game coming a night after Morris played in Friday’s loss to the Knicks, assistant coach Chris Quinn did not cite the back-to-back set as a factor.

Instead Quinn, who was filling in with coach Erik Spoelstra attending to a family matter, indicated prioritizing an optimal rotation.

“I mean everything is trying to figure out what’s best for the team going forward,” Quinn said. “Obviously Markieff is a very good player, a great leader in our locker room, that we respect.”

Morris returned March 12 after missing 58 games due to whiplash. Saturday was the first time he was held out, after six appearances in his comeback. He had played at least 17 minutes in his first three appearances, reduced to an average of 10.6 in the following three.

Oladipo, by contrast, played 25:04 on Saturday night, after not going more than 19:55 in his previous five games back from May quadriceps surgery.

Quinn said that was a product of having given Oladipo the previous night off and wanting to allow the 29-year-old guard to re-establish a rhythm.

“I thought you could see at times he has a burst, he has an ability to get by people and make some plays,” Quinn said, with Oladipo closing 3 of 9 against the Nets for nine points. “So, just continue to get him in more of a rhythm and get him ready.”

Guard Tyler Herro said the goal is to try to help Oladipo get back to form.

“Just trying to get Vic in the swing of things,” Herro said, “and try to get him the ball in his spots where he can feel comfortable again.”

Goran Dragic said he was touched by the Heat’s video tribute during the first timeout of Saturday night’s game.

“I mean it means a lot,” Dragic said. “I spent six-and-a-half years here. It’s always nice to get the reception like I did here. I really appreciate the fans, what they did for me during those years. We had a blast.”

Dragic was dealt by the Heat to the Toronto Raptors in the offseason in the sign-and-trade agreement for Kyle Lowry. He then was dealt to the Dallas Mavericks, waived, and signed by the Nets.

“Right now,” Dragic said, “my focus is in Brooklyn and try to win as many games as possible.”

Why, yes, that was lumbering Nets center Andre Drummond flashing a two-finger peace sign while completing an unlikely fast-break drive Saturday again the Heat, similar to the touchdown style of Tyreek Hill, the wide receiver recently acquired by the Miami Dolphins.

“I think its self-explanatory,” Drummond said postgame. “No, I don’t know what made me do it, maybe because Tyreek Hill is coming here. Just happened, I don’t know.”

Of the sight, Nets forward Kevin Durant said, “It was definitely hilarious in the moment.”

Drummond closed with 13 points and game-high 11 rebounds, his 19th career double-double against the Heat.

Despite being limited to 14 points, Adebayo still has led the Heat in scoring in each of the past seven games against the Nets, averaging 25 points and 10 rebounds over that span.