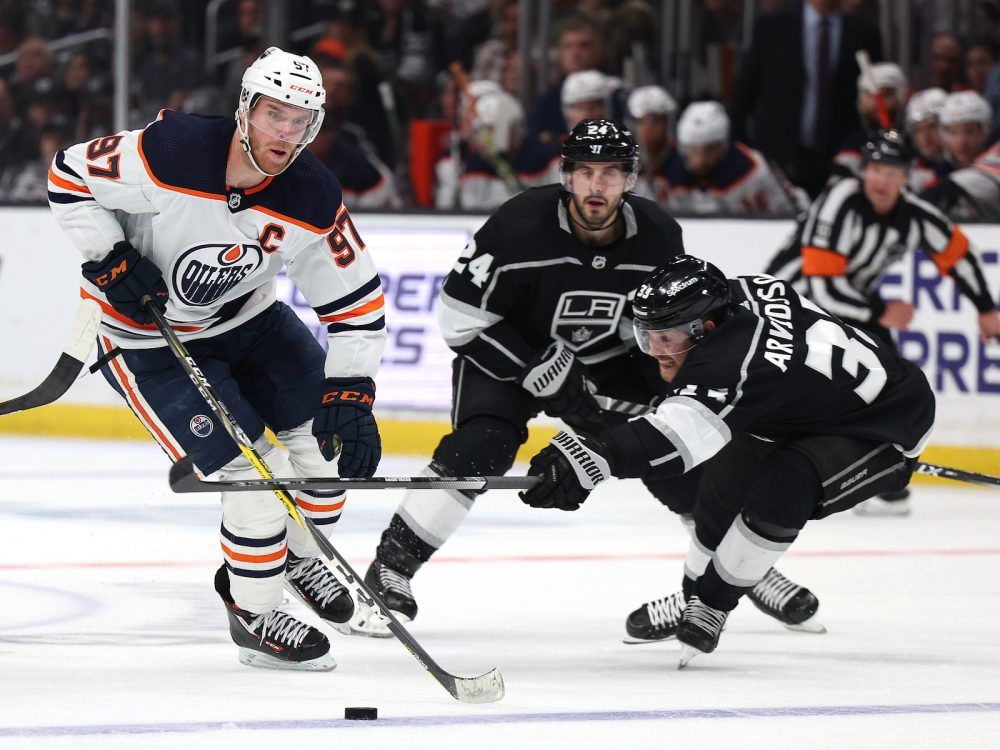 A funny thing happened on the way to the rebuild. Not only did the Los Angeles Kings draft a few hot shots like Quinton Byfeld, Alex Turcotte, Tobias Bjornfot and Arthur Kaliyev, they went about the business of filling their team with mature NHL-calibre talent via other traditional routes including trades and free agency.

Nowhere is that more evident than on the Kings’ “second” line, three players who all have roots in other NHL organizations:

Judging from scoring logs the line was first put together on Jan 01 of 2022, and responded by combining on a goal just 12 seconds into the first period, the first of 4 goals and 11 points they recorded against the Flyers that day.

Since then, they’ve been on fire. Moore has 14-27-41 in 49 games, Danault 23-14-37 in 49, Arvidsson 14-21-35 in 41. But they are about more than just scoring, playing high calibre competition and dominating play. In eight hours as a trio, they have produced shares in the 56-60% range across the board from shot attempts, shots on goal and scoring chances to expected goals and goals. Moore and Danault have produced similar results in a further 140 minutes without Arvidsson, as might be the case tonight.

None of the players is particularly imposing. Danault is the largest at 6’1, 200 lbs, while his wingers are both listed as 5’10, 185. Danault also has by far the highest draft pedigree, having been picked late in the first round by Chicago back in 2011. Arvidsson was a fourth-round steal by the Preds, Moore an undrafted free agent signed out of college by the Leafs. Over-achievers all. And with a combined cap hit under $12 million, they have over-delivered for the Kings in 2021-22.

Oilers fans can expect a steady diet of Danault and Anze Kopitar matching up against their superstar duo of Connor McDavid and Leon Draisaitl. Who lines up against whom is an open question, controlled to a degree by the home coach with the last change. Something to watch throughout the series, even as coaches Jay Woodcroft and Todd McLellan are likely to favour power vs. power match-ups rather than trying to find a soft spot in the bottom six, which of course plays both ways.

Oilers had all hands on deck at the morning skate, with 8 forwards and 14 defencemen. Biggest surprise was Josh Archibald skating on the fourth line with Ryan McLeod and Zack Kassian, however the best guess here is that Archibald will join Derick Brassard and Devin Shore in the press box because the Oilers will run with the 11F / 7D alignment that has served Woodcroft well.

All the more so because Darnell Nurse is returning from injury. All signs are positive that he’s ready to go, but it’s not a bad idea to have an extra blueliner available, especially one as experienced as Kris Russell.

Least surprising news of all was that Mike Smith was in the starter’s net.

Game time is 8pm MDT, with the game slated to be shown on  CBC (sorry!). Keep your remote handy, as the Tampa Bay at Toronto game doesn’t start until 5:30 pm and seems likely to overlap the start of the Oilers-Kings contest. Presumably at least one of the numerous Sportsnet channels will have the western game right from puck drop.

LEAVINS: Time has come for the Oilers to take the next step — 9 Things

LEAVINS: The Oilers clinch home ice in 5-1 win over Pittsburgh