Parts of the New South Wales east coast are preparing for major flooding this afternoon as the severe weather lashes the state sparking new evacuation orders.

An evacuation order for Lismore CBD, Lismore Basin and low lying areas of East Lismore and Girards Hill has been issued.

Lismore residents are being warned to leave by 4pm as the Wilson River is expected to peak this afternoon.

The evacuation centre is located at the Southern Cross Univeristy in Lismore.

It comes as meteorologist Dean Narramore said moderate to major flooding is expected this afternoon on the Tweed River and Wilson River, which has sparked the new evacuation orders.

“River levels are continuing to increase into the afternoon and will reach major flood levels later this afternoon,” he said.

However, the rain is expected to ease off for the Northern Rivers today despite the river continuing to rise.

Coffs Harbour is also in the firing line.

“The rainfall we saw last night in the Northern rivers is now around the Grafton to Coffs Harbour area,” Mr Narramore said.

“A particular concern over the next 12 to 24 hours is the Coffs Harbour area.”

Mr Narramore warned of moderate to major flooding on the Orara River and Bellinger River on the Mid North Coast of NSW.

“We could see six hourly totals of 50 to 150mm with isolated falls in excess of 200mm possible and that is likely to lead to dangerous flash flooding causing life threatening conditions,” he said.

Landslides and debris from the rainfall could also cause road closures in the region.

Flooding is also possible further south in the Hunter and Hawkesbury regions. 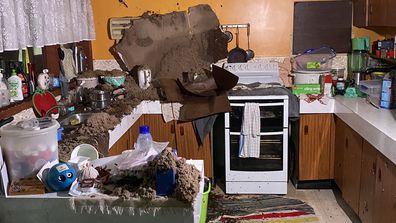 Queensland Premier Annastacia Palaszczuk has expressed her concern over the impact of the floods as the state is inundated by rain.

She said multiple parts of the Gold Coast have seen 200mm of rain getting up to 358mm in Tallebudgera.

Four schools have been forced to close and multiple roads have been deemed “treacherous”.

There have been 14 calls for rescues in the past day while there were hundreds of jobs overnight.

“There were over 240 SES jobs,” Commander of State Operations Cheryl-Lee Fitzgerald said, confirming the “immediate threat” has moved south to NSW.

“We do have a number of crews that are actually going to move south and help our neighbours in Northern Rivers.”

Lismore in ‘hands of the gods’

Lismore Mayor Steve Krieg said the town is “shattered” and dealing with “flood fatigue” as a new evacuation order is in place for the area.

“We’re very much in the hands of the gods at the moment.

“If the expected rainfall comes in today our river could rise quite dramatically this afternoon.

“If the rain stays out towards the coast we may dodge a bullet and our river might only get to that moderate level.”

The NSW SES gave residents in North Lismore until 9pm while those in South Lismore and Kyogle were allowed another hour.

Chindera, Bandora, Bilambil Heights and Kingscliff all copped more than 100mm of rain in six hours and major flooding is possible for the Richmond, Wilsons, Orara and Bellinger rivers from today.