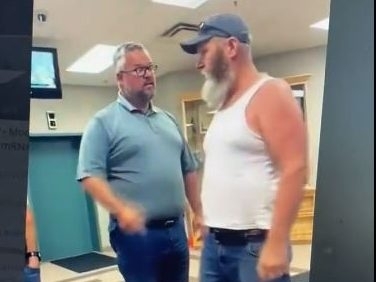 There’s something missing from this story. No one has bothered to ask this person why he is so angry. It’s entirely possible that he is part of a group that either can’t or won’t articulate their concerns. I don’t condone his behaviour at all, physical and verbal intimidation are unacceptable at any time. There’s a phrase I read some time ago: “Happiness is the correct balance of ideology and reality.” Reality left the scene some time ago, taking with it common sense. I don’t agree with the actions of this person, but I share some of the anger.

(People who act like that don’t deserve to be listened to.)

To the bozo in Grande Prairie; what is wrong with you? Your vulgar and intimidating confrontation with Chrystia Freeland is an insult to the millions of Albertans who feel our energy industry is under attack by her Liberal government, and are looking for effective ways to counteract this discriminatory demonization. You have now just undermined the very cause that you likely claim to support, as your ballcapped, muscle-shirted mug is now national news, reinforcing stereotypes, and providing our pious prime minister with more ammunition. You might even become a Liberal campaign ad. Thanks buddy!

Letter writer Caspar Pfenninger made some very valid points on euthanasia. In actuality I was asked by my mother’s doctor to decide her “fate” in 2009. At 87 years old she had fallen and broken a hip bone, and as is often the case developed pneumonia while in the hospital. On one occasion when I went to visit her the doctor pulled me aside and asked “What would you like us to do?” In astonishment I replied, “What are you asking of me?” The doctor gave no response, but instead just smiled at me. I then told him, “You will cure her pneumonia, and when ready she will be going home.” A month later she was released and came home to live a good quality of life for six more months. To me this is a prime example of why it is important for people to have a responsible and empathetic advocate to look after their best interests.

(It’s recommended people have this talk with their elderly family members.)

Re: ‘They’re not supposed to be here’: Invasive crayfish found in Banff National Park. Could this be the start of Crustacean farms springing up in the province of Alberta now? Move over Betsy, looks like you’ve got some competition coming your way?

LOOK IN THE MIRROR

Canada could be in a lot better position regarding rising costs if so many hadn’t been so supportive of all the government’s poor decisions. So if rising housing, food and energy costs go beyond your comfort zone, just look in the mirror and say, “I was part of that by supporting stupidity.”

(What if you voted for the other guy?)

Send us a letter to the editor