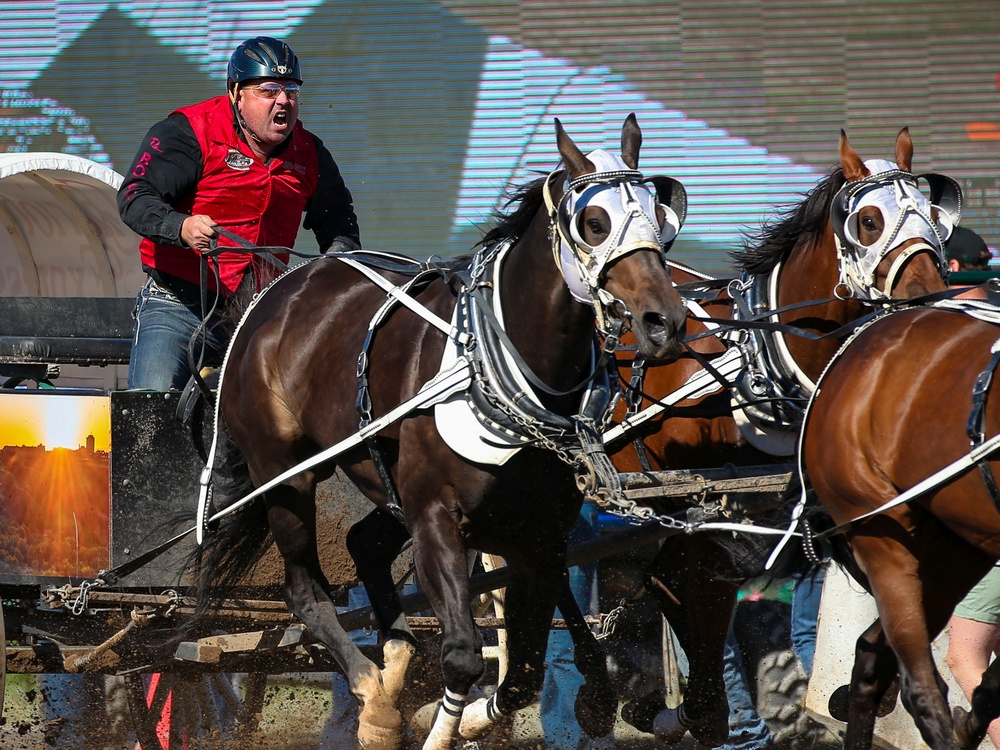 “It still hasn’t sunk in yet, but it’s been a heck of a year for us,” said Molle, who also won the 2022 Cowboys Rangeland Derby at the Calgary Stampede on July 17. “I’m proud of the team and everybody that does everything for us. It’s not me — it’s the horses, the crew, the sponsors and the family. I can’t thank everybody enough.”

Although he was crowned the aggregate champion at the World Professional Chuckwagon Association’s final show at Century Downs Racetrack and Casino the night before, Molle took the second barrel for Sunday afternoon’s $75,000 final heat, while third-place finisher Obrey Motowylo won the draw and took barrel No. 1.

“It’s luck of the draw and Obrey got No. 1,” Molle said. “We worked with what we had and it turned out good. It could have gone the other way, too.”

Aboard his Chariot Express outfit with Breeze and Wildcat as the lead team and Solo and Smoke on the wheel, Molle raced out ahead of Motowylo and took the rail after the first turn.

The 44-year-old reinsman from Chauvin, Alta., then raced around the track and crossed the line in first place in a track record time of 1:21.59 ahead of Motowylo (Co-operators Insurance), Chad Fike (Propak Systems Ltd.) and Ross Knight (Ted Valentine Memorial).

“The horses had lots of early speed and we took advantage of that, so I took the rail and looked back and we had enough room,” said Molle, who added $30,000 to his bank account for his efforts. “We leave on a high note, so it’s pretty exciting.”

The top dozen drivers in the WPCA standings heading into the five-day event earned the right to compete in the Winners’ Zone playoffs. Based off points they received for daily running and aggregate times through the first four nights of action at Century Downs, Molle, Fike, Motowylo and Knight finished atop the standings to earn the four spots into the final dash.

Although Ethan Motowylo served as an outrider for Molle during the first four nights of competition, he worked alongside his dad Obrey during the championship dash. Nolan Cameron stepped up to help out the Winners’ Zone champion with outriding duties on Sunday along with Molle’s son Kaeden.

Before Sunday’s races began, Layne MacGillivray was honoured for wrapping up his first-ever WPCA season-long title the night before.

For winning his first-ever chuckwagon title, MacGillivray took home $10,000 as well as a one-year lease on a new GMC pickup truck.

“It’s a huge accomplishment for us,” said MacGillivray, who accomplished the feat in record-breaking fashion with the highest total of 1,500 points that he accumulated throughout the racing season. “We’ve had an amazing year. It’s awesome.”

MacGillivray’s impressive point total eclipsed the previous record of 1450.5 that Reg Johnstone set back in 2005. After winning the 2022 title by 90 points over Motowylo, the reigning world champion, and 105 points over four-time victor Kurt Bensmiller, MacGillivray commended his horses for their consistent and mostly penalty-free performances throughout the season.

“I can’t say enough about them,” he said. “They’ve done an amazing job for us all year.”

Breeze, Molle’s right leader, was named to the 2022 WPCA Equine Outfit of Excellence along with MacGillivray’s left leader Mer.