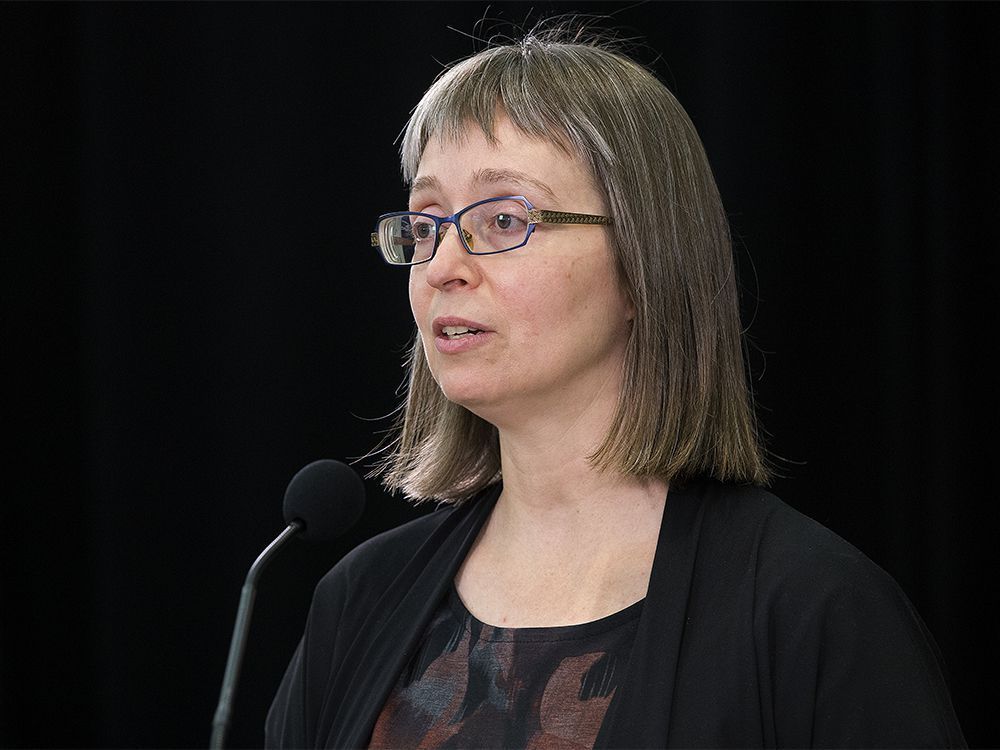 A judge has ordered Alberta’s top doctor to produce withheld documents shedding light on why she lifted a mandatory masking order for the province’s schools.

Chief medical officer of health Dr. Deena Hinshaw must be more transparent in responding to demands by the Alberta Federation of Labour and five family plaintiffs for information explaining why the United Conservative Party government lifted the COVID-19 mask mandate on March 1, says a ruling by Court of Queen’s Bench Justice Grant Dunlop.

The justice said he doesn’t believe Hinshaw’s reason for not providing more of the internal government documents.

“Perhaps that material is too voluminous or cumbersome to produce, but the certified record of proceedings does not say so,” states Dunlop in the 14-page decision, dated May 17.

“Instead, Dr. Hinshaw has certified she has only three documents relevant to her decision. With respect, that is hard to believe.”

Dunlop dismissed an argument by government lawyers that because the labour group and families aren’t seeking relief from the masking decision, no further information should be divulged.

“The Crown has not provided an alternative argument as to why evidence regarding the prohibition (on mandatory masking) should not be permitted,” he wrote.

He ordered Hinshaw to produce additional documents no later than May 27 detailing the reasons for her decision, concluding the submission of her decision, the justice minister’s certificate and cabinet minutes was insufficient.

The AFL and the parents of five immunocompromised children contend the provincial government’s move to end masking in public places was “defective,” as was the prohibition on school boards to require masking.

The justice said it’s clear the applicants contend the government’s masking decision was a violation of charter rights and disagreed with Crown counsel who insisted such a challenge wasn’t made.

“So far Dr. Hinshaw has failed to disclose what evidence she considered,” stated Dunlop.

“The applicants are seeking charter relief. They are entitled to adduce evidence to prove their case.”

“It’s clear the government wanted all of this to go away, they wanted to sweep it under the carpet but the judge called them on it,” he said.

“It’s going to result in the disclosure of information Albertans have been asking for and will find very interesting.”

The union’s interest in the case, he said, stems from it being a workplace safety issue, with hopes it will force governments to better protect students and staff in the future.

Much of the case revolves around a Feb. 8 cabinet meeting in which Hinshaw provided a PowerPoint presentation on the situation regarding the novel coronavirus pandemic.

Dunlop received oral and written submissions on the case earlier this month in preparation for a hearing on the matter in August.

After the Kenney government moved to eliminate most COVID-19 protections, including the mask mandate in schools, some doctors warned of serious health implications brought on by the virus’s sixth wave.

Absence rates at the Calgary Board of Education reached 8.4 per cent among K-3 students in mid-April, averaging nearly 6.3 per cent for K-12 students overall. Additionally, up to 1,106 school-based staff were away due to illness, with only 847 positions filled by substitutes and casual employees.

Two months earlier, just before the UCP government lifted mask mandates in schools, student absences hovered around four per cent with about 600 staff away.

“The record filed with the court in Beaudoin was extensive … I agree with the (Alberta) applicants that the record is incomplete,” he concluded.

But Dunlop denied the applicants’ request that Hinshaw’s 70-page affidavit on the matter be admitted, saying much of that material is irrelevant.

The same applicants’ bid in February to have the end of the mask mandated halted with an emergency injunction was dismissed by an Edmonton judge.

He also invited Albertans to “go down to the AFL headquarters and protest, peacefully.”

Hinshaw has repeatedly refused to divulge to reporters what COVID-19 public health recommendations she made to top government officials, citing cabinet confidentiality.

Details on the inner workings of the government’s pandemic policies are also being sought by a number of church and business plaintiffs in a separate court action.

They’re challenging the constitutional validity of measures imposed by Hinshaw under the Public Health Act to combat the deadly coronavirus.

If successful, it would impact any measures that may be proposed during future waves of the disease and open the door to civil claims by businesses economically impacted by restrictions.

A spokesman for Alberta Health said on Friday Dunlop’s decision is still being reviewed by lawyers and the department was “looking forward to the hearing on the ovrall legal matter in August.”