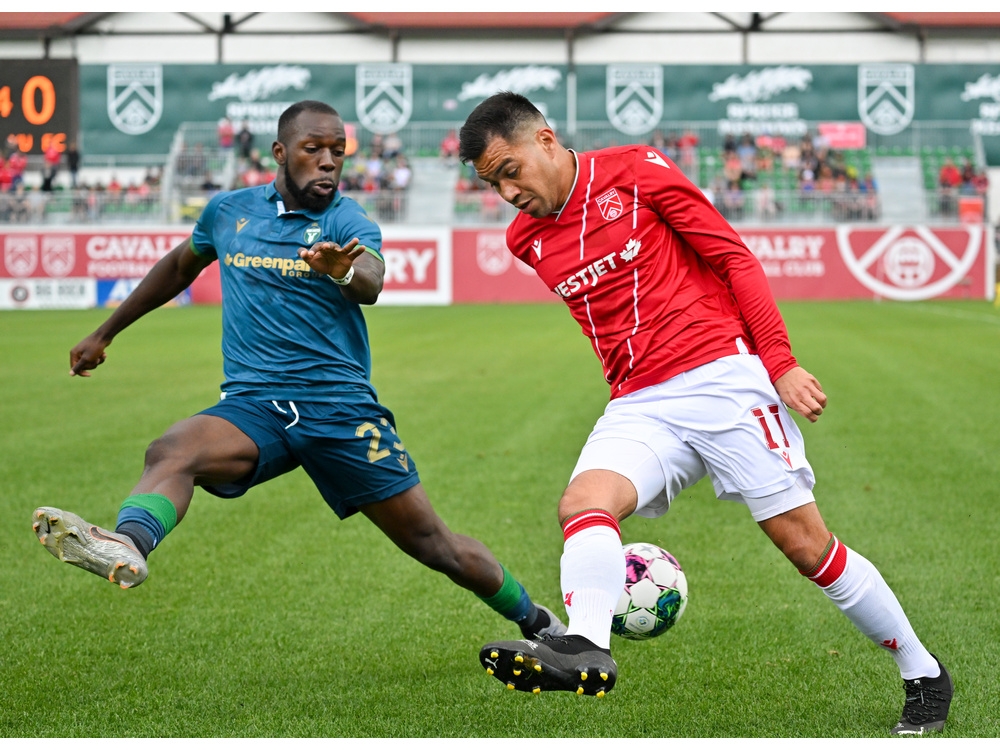 So the Cavalry FC gaffer was looking for another ‘son’ to heap praise on Saturday afternoon at ATCO Field.

And he found that someone in a familiar light of his life.

That’s clutch midfielder Jose Escalante, who knocked home the only goal and the game-winner in a 1-0 take-down of York United FC.

“He’s been on the club as one of our originals,” said Wheeldon Jr. of the talented Honduran. “We’ve got a soft spot for him because he plays on the edge. And I think he’s taught us as much as we’ve taught him. He’s learning the culture. He loves Calgary. He loves the Foot Soldiers (fan group).

The winner by Escalante in front of 3,401 patient and chilled fans — who waited out a lengthy weather delay early on — moved Cavalry (11-4-7) up the CPL table in to second place on 37 points, one point behind front-runner Atlético Ottawa (11-5-5).

It also sent Wheeldon Jr. off on his trip up the QEII happy to watch his 13-year-old son, Jax, compete for the crown at the Edmonton-hosted under-13 Tier 1 provincial championships.

“It’s good, and it’s good to be a dad,” said Wheeldon Jr., who’s son has contributed at least three goals for Calgary Foothills through Saturday’s provincial action. “I spent a lot of time in my previous career as a technical director going up to Edmonton and coaching other people’s kids. Now I get to watch and enjoy my own.

“I’m there for Sunday … It’s actually the most rewarding thing to do is to be a parent and watch your kid.”

Meanwhile, the Cavs — thanks to pesky Escalante’s marker in the 55th minute — got a somewhat elusive reward of beating pesky-in-its-own-right York, a struggling side in the standings.

The storyline coming in was the Toronto team’s ability to put up a wall against Cavalry, allowing just one goal to the Calgary crew in three previous meetings this season.

It wasn’t easy again in Saturday’s matinee, but Escalante provided the firepower to make it happen. The spark came from teammate Mikael Cantave, who made a smooth move to out-manoeuvre a York defender along the sidelines and worked his way into the corner, where he sent a ball through to the far side of the box. Escalante calmly knocked it down, took a few steps and launched it past desperate young York goalkeeper Eleias Himaras.

Then Escalante unleashed what’s become a familiar celebration — his hands on each side of his head with his fingers pointed up and out like moose horns — with the Foot Soldiers at the southeast corner of the pitch.

“Me and him started doing that playing cards just to bug each other,” said Cavalry teammate Charlie Trafford. “So it was kind of this inside thing which has blown up around the league. And he’s run with it.

“He even sticks his tongue out. It’s brilliant. I love it. It gives me so much energy seeing him do that.”

Ali Musse kept the energy high as he nearly made it 2-nil a few minutes later, when he ripped a long-shot off the crossbar on a turnover by York in its own end.

Then Trafford then got his head on a feed deep into the box but knocked it just wide.

To preserve the clean-sheet at the other end, Cavs goalie Marco Carducci had to climb high to grab a long shot — this one kicked by Molhem Babouli — that flirted with danger in the 82nd minute.

And only three minutes later, the Cavs ’keeper then charged out to cut down the angle enough on Lisandro Cabrera, who found himself charging in alone but punched the ball wide of the far post.

All totalled, that spelled no finish for York (6-5-10) this time around, as Carducci got his league-best seventh clean-sheet on the CPL campaign.

“He was huge,” added Wheeldon Jr. “What delighted me was the goal we scored we’d worked on in training so you’re always pleased when they put that in. But you need a big save at the other end. If you’re not going to put them away by getting insurance …

“Most importantly, your keeper has to keep you in now. He saved us two points there.”

The highlight — or lowlight — of the first half was the 90-minute weather delay, with plenty of lightning in the area that appeared about 17 minutes into the contest.

Other than that, the chances came few and far between for both sides.

For Cavalry, attacker Joe Mason got his head on Escalante’s quick pass into the middle of the penalty area that went wide during a 39th-minute rush.

And for York, it was Chrisnovic N’Sa with a floater from long range that nearly found the far side of the net if not for Carducci jumping up to get his fingers on the ball and tipping it away from danger.

“We’ve been playing well lately and scoring a lot of goals,” added York gaffer Martin Nash. “Cavalry did a good job of limiting our chances. But the difference in the game was they finished theirs and we didn’t.”

The game concludes a three-game home-stand for Cavalry, which now goes on the road for three, beginning with a Labour Day affair on Monday, Sept. 5 against host HFX Wanderers FC in Halifax (noon, OneSoccer, OneSoccer.ca).