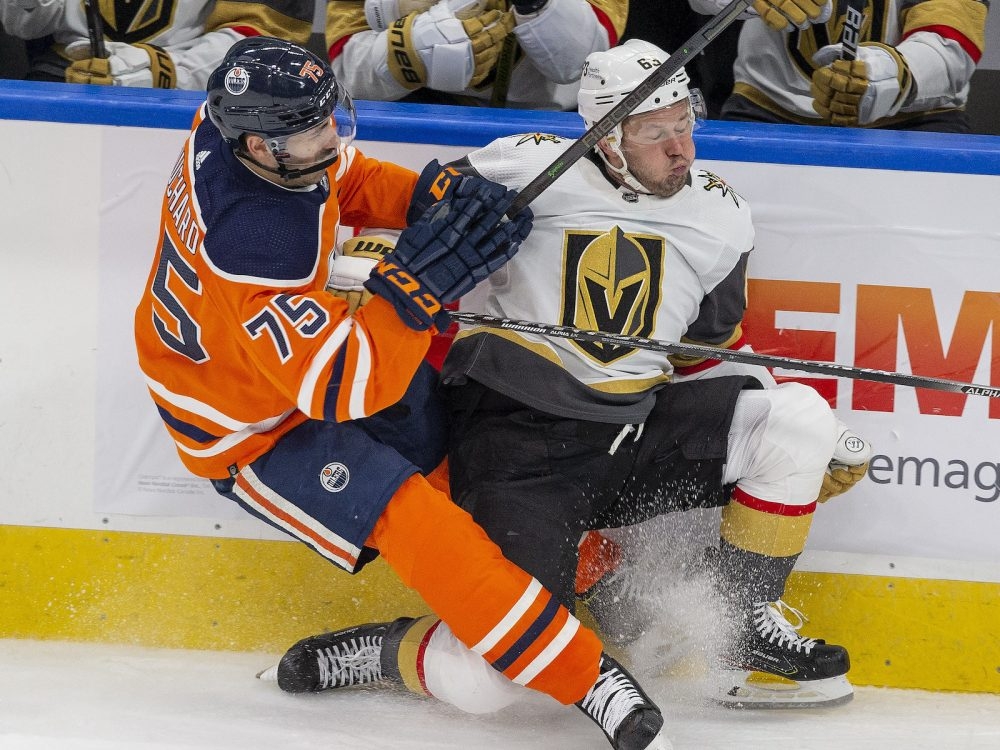 To their teammates they’re kind of like the original six.

Connor McDavid, Leon Draisaitl, Ryan Nugent-Hopkins, Darnell Nurse, Kris Russell and Zack Kassian are the only Oilers remaining from the last time the team performed in the playoffs before a capacity crowd to create the scene Edmonton has made famous over the years.

This a loud crowd of fans spilled out on 104th street to celebrate outside the windows of the press conference room behind the Wayne Gretzky statue when back-to-back shutout goaltender Mike Smith and Kassian, who coach Jay Woodcroft said played his best game here in his tenure so far, visited the room.

To those fans and this city, the Oilers had just clinched not only a spot in the playoffs, but insured home-ice advantage in the first round series.

“In my opinion and for anyone who was here during that 2016-17 run, it’s the best fans in the league,” said Kssian. “They get extremely passionate during the season but they are loud and it’s a tough place to play during the playoffs.

“When you have fans like that and your team is playing well and doing the right things on the ice, it’s a tough place to come in and win games for opponents.”

“It’s amazing,” said Smith as fans chanted his name outside the windows. “To hear the crowd and the way it has been in the building in the last number of games, obviously there is a buzz in the air.

“This is why you play — to play important games at this time of season. It get’s your juices flowing for sure. In a market like this to have a full building and the people outside, obviously, you can feel the buzz in the air.”

The Oilers had just won arguably their biggest game of the season 4-0 over the surging Vegas Golden Knights outfit that had come in with a 7-1-1 record in their previous nine.

There was a massive swing involved.

While it didn’t mathematically guarantee anything, the Edmonton win effectively ended any hopes that Vegas might have had of catching the Oilers for one of the ‘Pacific Three’ locked-in, no-wildcard, playoff positions in the Western Conference.

The victory was accomplished with not only a second straight shutout after an entire calendar year without one by Smith, a win in which neither Draisaitl or McDavid registered a point and the first three goals by Kris Russell Cody Ceci and Warren Foegele.

It left Edmonton with 94 points in the standings and Vegas seven points back with 87 and the two teams both having six games remaining.

A Vegas win would have moved the Golden Knights to three points back of Edmonton — a realistic gap to close.

The Oilers won the internal series against both clubs, three games to one.

Any combination of Oiler wins and Knights losses totaling three and it’s mathematical and Edmonton will have clinched the playoff position. At the same time, with where LA sits, it would also guarantee the Oilers with home-ice advantage in the first round of the Stanley Cup playoffs.

So there was plenty of reason for the fans to spill out onto 104th avenue and celebrate.

There were no fans in the stands for the Oilers two playoff appearances under COVID protocols.

“It’s certainly been a ride this season going back to the beginning whe we saw the implementation pf vaccine checks and mandatory masks,” said organization VP and chief revenue officer Stew MacGregor.
“Ticket sales were decent out of the gate but then we had the implementation of 50 per cent capacity limits and elimination of food and beverage sales. When those protocols were lifted we started to see the atmosphere inside Rogers Place.”

The Oilers attendance numbers grew as the Oilers began to win again with a 13-23-2 record in their previous 18 games including going 9-0-1 at home over their previous 10 games. But only for the most recent two home games have they been able to announce back-to-back sellouts. And Saturday afternoon with plenty of kids in the crowd for Fan Appreciation Day they certainly had the most no-shows of the recent run.

The combination of fans returning to the building where the Oilers sold out 552 consecutive game during the Decade of Darkness and the building excitement involving playoff possibilities has people beginning to contemplate a scene that only Connor McDavid, Leon Draisaitl, Ryan Nugent-Hopkins. Darnell Nurse, Zack Kassian and Kris Russell, who scored his first goal in 125 games Saturday have witnessed. There hasn’t been a playoff gams here with fans in the stands since the Oilers 2016-17 playoffs where they went to Game 7 of the Pacific Division Final.

“We’ll be rolling out our public ticket opportunities over the next two weeks and we know we will see the demand continue. Oilers fans are known for their passion for playoff hockey so we are expecting to see capacilty crowds for our first game.”