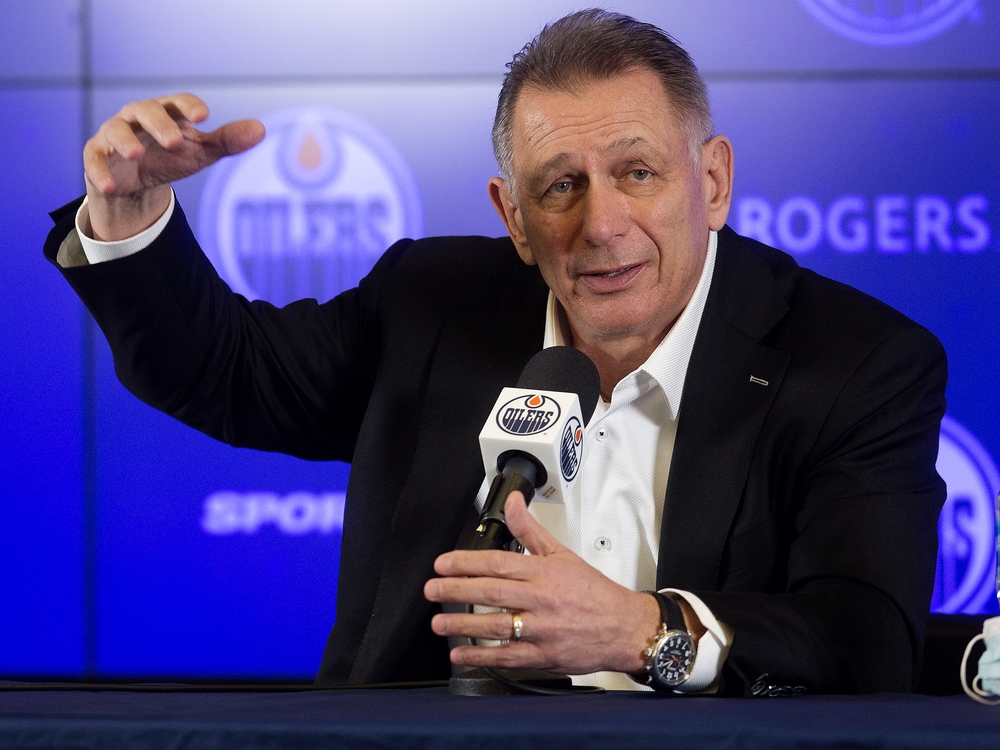 Normally, there are three stages to becoming a championship team.

Knock on the door.

Knock the door down.

The Edmonton Oilers have clearly found the door.

But can they now knock on it?

And are they ready to knock it down?

When you’ve accomplished the goal of ‘going deep’ in the Stanley Cup playoffs like the Oilers have managed by making it to the Western Conference final for the first time since 2006, they’re in a strange space.

These Oilers won the Pacific Division championship banner, the first banner to be won in Rogers Place to hang from the rafters with all the other banners won in the old building. But when the team returns to skate on the ice for Game 3 back in Edmonton, that banner won’t be up there for the occasion like it should be because of some unexpected complication.

Whatever. As the Oilers and Avalanche prepared to open the series Tuesday in Denver, it’s a fascinating situation for armchair general managers and especially for the real deal man in the chair himself.

You’d figure Edmonton GM Ken Holland, who did a brilliant job of adding components to this team this season, has already learned a lot in terms of constructing this team going forward when it comes to the players he wants to keep and the players he’ll want to improve upon.

The vast majority of them have graded well so far in the playoffs. But with the idea in mind that Colorado is the team Edmonton will likely have to beat in future Western Conference finals to go deep again and again, will Holland be even more focused on how his players compete against the Avalanche?

“The bigger the games, the more you find out, right?” is how he put it to me.

But Holland says there’s another aspect to consider with this team that will play a 13th, 14th, 15th and 16th Stanley Cup playoff game between now and Game 4 next Monday.

“The more you’re in these situations, the more experience your players are going to get and the more prepared you get for the next time.

“Sometimes it might factor in making decisions involving your roster, but also sometimes you think you just want to get back in there the next time and see how that specific player has grown in the interim.

“I’m sure Edmonton learned that in the ’80s, like when they lost the Miracle on Manchester.

“In that August play-in series against Chicago, we just played like it was the regular season,” he said.

The Oilers managed to win a game against Chicago and were swept by Winnipeg but Holland said there was no comparison in his eyes.

“Last year against Winnipeg, three of the games went into overtime and I thought we played playoff hockey. We weren’t giving up a lot.”

“Then this year, we had to play playoff hockey in March and April to get in. I think that really prepared us. When we had a bad game, we had to bounce back the next day because we were battling for our playoff lives. I think that prepared us for when Game 6 was a must-win and we played a tremendous game because we’ve done it before.

“As a general manager, you are trying to build a program and build a team that’s in the playoffs on a regular basis and you learn as you go.

“That’s why one of the things I tried to do in the last off-season was bring in older veteran on defence That’s why I brought in a 38-year-old Duncan Keith, an older Cody Ceci and at the deadline picked up an older veteran in Brett Kulak. They are not learning on the fly. They’ve been in a lot of these situations.”

Holland made the point.

“It’s hard to get to the Final Four. For me personally, the last time I was in the Final Four was in 2009, when we lost the Stanley Cup final to Pittsburgh.

There will be little knocking them if they don’t knock the door down but there should be every expectation that they will knock on the door.