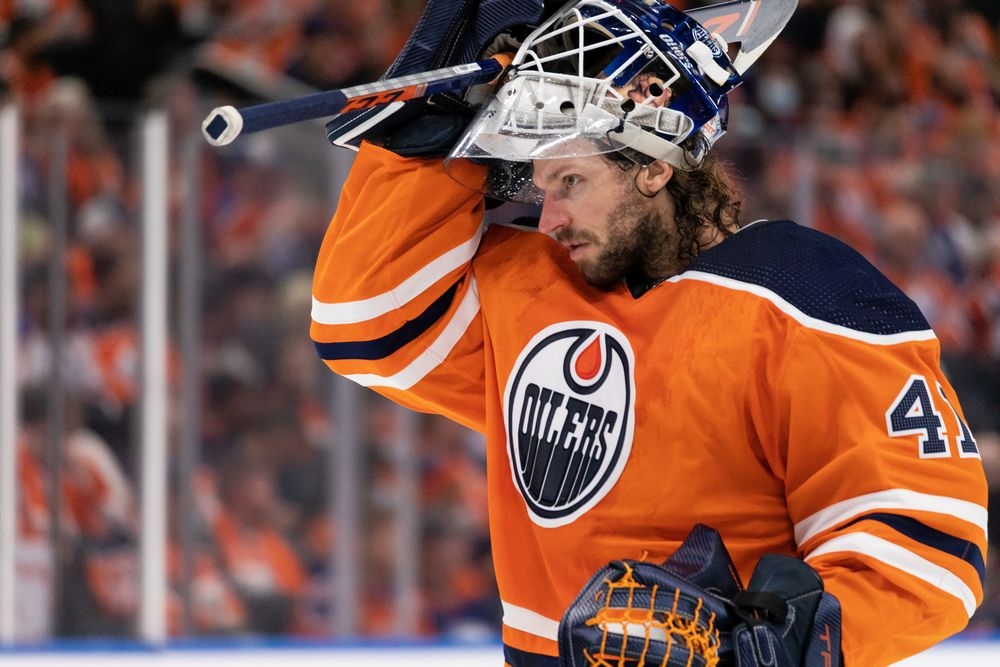 I hereby eat my words.

Fortunately I’m not eating them in the form of a shredded column with sauerkraut, sour cream and bitter lemon at centre ice, as I’ve had to do on two previous occasions. But the time has come to eat them.

The headline read: Time for Oilers to move on from goaltender Mike Smith.

“It’s become virtually unanimous with the entire population of Edmonton hockey fans that 16 days before his 40th birthday, 15 days and six games before the trade deadline and 53 days and 26 games before the end of the season, the Edmonton Oilers can’t continue to go with No. 41 in goal.”

I wrote it. I declared him done.

“The 17-year, five team, 657-game up-and-down career of the long–haired, six-foot-five, puck-moving character goalie, after Saturday’s 5-2 loss to the Montreal Canadiens, should now be complete.”

There was no lack of evidence.

The Oilers gave up the first goal of the game for the 37th time in Edmonton’s last 47 games and Smith gave up another soft one before the end of the period to make it 11 of the last 13 starts where he had given up two goals or more in the first period.

Of the 73 goaltenders listed in the NHL statistics, Smith left that game ranked 61st in save percentage at .891, and 65th in goals-against average at 3.57, while his win-loss record was 3-8-1 since the first two games of the season.

Indeed, that night after the Montreal mess Smith was graded as a 2, which translates to “terrible” by Cult of Hockey master grader Bruce McCurdy. And in a Twitter poll to follow the next morning after the game, 3,104 fans said Stuart Skinner should get the call to replace Smith.

So, I had plenty of company. But of all people, I was the one scribe who should have known better.

You see, I had watched this movie before.

It was in Prague, Czech Republic, during the spring of 2015.

With the Oilers out of the playoffs again as the Decade of Darkness reached Year 10 of 11 out of the playoffs, I’d been assigned to meet Team Canada at a short camp in Vienna, Austria, prior to covering the International Ice Hockey Federation world championship a four-hour train trip away in the Czech capital.

There was just one glaring weakness with the group.

McLellan and assistant coach Jay Woodcroft had been saddled with Smith, who was at the time the Arizona Coyotes goaltender coming off an abysmal season. Smith had accepted the assignment hoping to use it to reboot a career considered to be in critical condition.

The then-33-year-old goaltender, who had put together a career year in 2011-12 to finish fourth in the Vezina voting, back-stopped the Coyotes to the Western Conference final under coach Dave Tippett and had been rewarded with a six-year $5.67 million-a-year contract. But he’d been a disaster in the 2014-15 season.

“I think it’s a year he wants to put behind him and the best way to do that is to come over here, play for his country, have a good tournament, win a gold medal and have a real good summer,” Team Canada goaltending coach Sean Burke told me as the team gathered.

As he prepared for the event, Smith told me: “It’s pretty exciting to look around the locker-room and see the skill we have with some of the best players in the NHL.”

Smith played great. He gave up but 12 goals in eight games for a 1.5 goals-against average, a .931 save percentage and two shutouts as Canada won the gold medal, our nation’s first since 2007.

With back-to-back 4-0 wins in Nashville and back at home in the biggest game of the season Saturday against the surging 7-1-1 Vegas Golden Knights, Smith’s consecutive shutouts put him in select company with other senior citizens of the goaltending community.

He became one of only six goaltenders over the age of 40 to turn the trick. The others were Martin Brodeur, Dominik Hasek, Johnny Bower, George Hainsworth and ex-Oilers netminder Dwayne Roloson.

Who knows how this will turn out?

Whatever happens, there’s certainly no denying the story Smith has been writing lately. We’ve all been witnessing something exceptionally special.