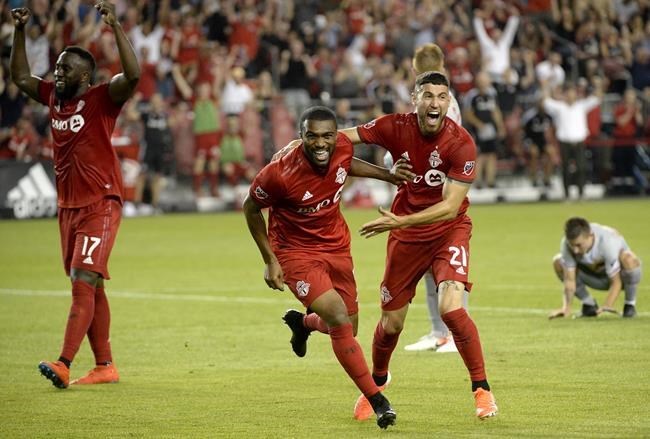 The 19-year-old stole the ball off Damir Kreilach after the Salt Lake captain got it from goalkeeper Zac MacMath. Nelson looked up, saw McMath was out of position and fired it home from 35 yards-plus in the 79th minute.

Toronto defender Carlos Salcedo, who had a difficult game in returning to where he started his MLS career, was sent off in the 86th minute for a high boot that caught Sergio Cordova in the face.

Toronto has been almost as dominant at BMO Field against RSL, holding a 5-1-3 edge there in all competitions.

Veteran Justin Meram opened the scoring in the seventh minute for Salt Lake (3-1-3) after Jacob Shaffelburg lost the ball to Maikel Chang in midfield. Two passes later it was on the feet of the American-born Iraq international who, despite facing four TFC defenders, hammered a shot into the top corner past Alex Bono from just outside the penalty box.

Some fancy footwork by Meram made room for the shot, with onrushing TFC captain Michael Bradley unable to adjust. It was Meram’s 49th career regular-season goal.

Shaffelburg made amends two minutes later with a fine run down the left flank, that started on Toronto’s side of midfield, before floating a cross that found Thomson, who acrobatically volleyed it home with his left foot in his second MLS start.

Kreilach made it 2-1 for the home side in the 43rd, ghosting into the penalty box and chesting down Chang’s perfect cross before knocking it past Bono from close range. Defender Lukas MacNaughton went up for the ball but failed to get his head on it and the Croatian midfielder made him pay.

Chang was given too much time to aim his cross at the far post.

Toronto was coming off back-to-back home wins over D.C. United and New York City FC. And coach Bob Bradley stuck with the winning lineup, going with the same starting 11 as last time out against NYCFC.

Midfielder Jonathan Osorio extended his club record by making his 298th appearance for Toronto in all competitions.

With the game tied at 1-1, Salt Lake had two good aerial chances midway through the first half but headers by Cordova and Marcelo Silva were both off-target.

An unmarked MacNaughton had a great chance to level the score off a corner in first-half stoppage time but his header missed the mark.

Kadin Chung replaced MacNaughton at halftime as Toronto switched to a back four, likely looking to strengthen its right side against the danger of Meram.

The home side almost added to its lead right after the break when Cordova breezed past Salcedo but the Venezuelan’s shot from a tough angle was handled by Bono. Thompson went down soon after, taking an accidental knock to the head after tangling with an RSL player, but kept going after treatment.

Meram’s curling shot from distance was just wide in the 50th minute after Salcedo lost the ball.

Toronto dodged a bullet in the 59th minute when Meram was unable to put away a feed from Cordova on an attack triggered by a charging run by Pablo Ruiz. Two minutes later, Cordova fired a shot wide as Salt Lake continued to carve open the TFC defence.

While Toronto snapped a nine-game winless streak dating back to early October with the consecutive home victories, it has not won in its last 11 away games (0-7-4) since a 2-1 win in Chicago in early July.

Its last victory at a Western opponent was September 2017 at the Los Angeles Galaxy, albeit with limited meetings with Western foes during the pandemic-disrupted 2020 and ’21 seasons.

It was “Utah Jazz Night” at Rio Tinto Stadium.

This report by The Canadian Press was first published April 9, 2022