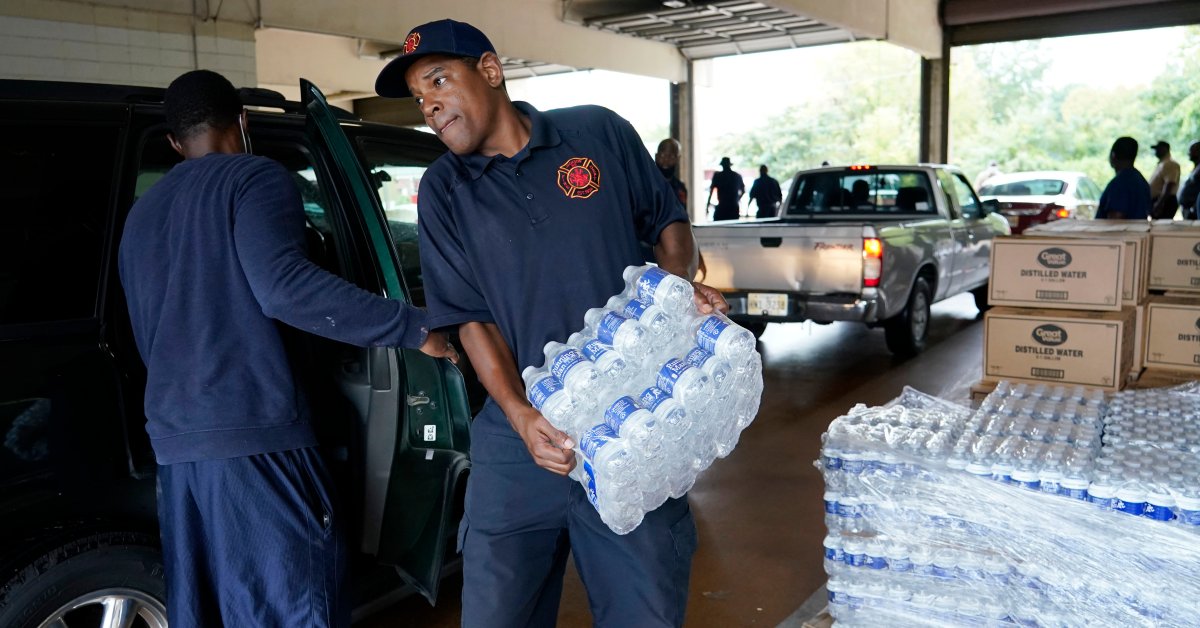 Some 180,000 residents in and around Jackson, Miss.—the state capital and largest city—have little or no sanitary water for the foreseeable future after the city’s primary water treatment plant failed, the governor announced Tuesday.

“Until it is fixed, we do not have reliable running water at scale,” Mississippi Gov. Tate Reeves said Tuesday, in an announcement that activated the National Guard and declared a state of emergency. “The city cannot produce enough water to fight fires, to flush toilets and to meet other critical needs.”

The state health department has warned that tap water is not even safe to brush teeth with or give to pets. Jackson residents have previously been advised to boil all water before drinking for the last month.

Recent flooding, operational failures and understaffing at the treatment plant—and decades-long infrastructure decay, have culminated in an indefinite failure in the supply of safe tap water to Jackson water customers. The governor called it a “health threat.”

“This is a very different situation from a boil water notice, which is also a serious situation which residents of Jackson have become tragically numb to,” Reeves said at a press event on Monday. “Until it is fixed, we do not have reliable running water at scale. The city cannot produce enough water to fight fires, to flush toilets and to meet other critical needs.”

Why is Jackson, Miss. without safe drinking water?

O.B. Curtis Water Treatment Plant is the facility that serves Jackson, and it has been relying on backup pumps, which have limited water pressure, since its main pumps failed last month. The Pearl River, which runs through the city, began flooding this past weekend and damaged the already vulnerable treatment plant—causing the Jackson resident to lose most of their water pressure altogether.

The facility has had ongoing issues with understaffing that result in a significant lack of employees who are qualified to operate the plant. Part of the governor’s emergency plan will include recruiting additional qualified operators immediately, and splitting the cost of this with the city.

Reeves previously declared a state of emergency on Saturday as the Pearl River flooded due to severe storms. Meteorologists have since reported that the flooding is not as severe as it has been in recent years, but rainwater entering the reservoir contaminates the water supply and that the flood exacerbates the existing structural fragility of the plant. The flooding is due to recede, however, damage to the plant still needs to be repaired to restore water access.

How long has this been happening?

Jackson has had a boil-water notice in place since July. Two weeks ago, Jackson Mayor Chokwe Lumumba said that at least one of the main O.B. Curtis pumps would be fixed by the end of that week, but that didn’t happen.

Lifting a state-imposed boil-water notice entails collecting water samples from 120 sites across the city and getting two days of clear results. The city had failed this process multiple times since July because the samples were cloudy and more likely to contain disease-causing pathogens.

“This is an issue that we work on each and every day—not just when there’s a boil-water notice, not just when there’s low water pressure. This is something that we have gone to the highest level of government, in order to speak to,” Lumumba said at a press event earlier this month. “I have literally spoken to the president himself as to the funds that the federal government is attempting to send to the city of Jackson, and what is available.”

Jackson has struggled with safe water access for decades and has lacked the funding to implement change. Mayors and city council members have called for repairs since the 1940s, the Jackson Clarion-Ledger reported. In the 1970s and again in 2020, the EPA warned that the city had to get serious about updating its infrastructure to improve water quality. The 2020 report highlighted lead pipes, faulty monitoring equipment and insufficient staffing. Years of neglect have built up and in 2021 alone, the city had dozens of boil-water notices due to the old, fragile water system.

Some researchers and columnists point to “white flight” for Jackson’s failing infrastructure and a subsequent lack of taxes and state funding that instead poured into developing neighboring predominantly white cities such as Flowood and Madison. More than 82% of Jackson’s population is Black and almost a quarter of residents live below the poverty line, a stark contrast to 1980 when over half of the city’s population was white.

How is this affecting the community?

The city has maintained a water connection to residents but has strong guidance on boiling water before drinking or sticking to bottled water. The state health department made a do’s and don’ts list for Jackson residents, which includes not consuming water directly from the tap in any form—not even to give to pets or make ice cubes. Water should be boiled before cooking, washing dishes or brushing teeth. Residents are encouraged to conserve water and to boil it for at least three minutes.

In response to the water crisis, all Jackson public schools have shifted to virtual learning. Although unsafe drinking water has historically plagued the city with some areas experiencing far greater risk than others. The current crisis spans the whole city and all residents are taking a toll at home, at businesses and in schools.

Last week, Lumumba said that Jackson would need around $200 million to fix the city’s water system . Mississippi currently has a statewide budget of $75 million to improve water systems, the Associated Press reports.