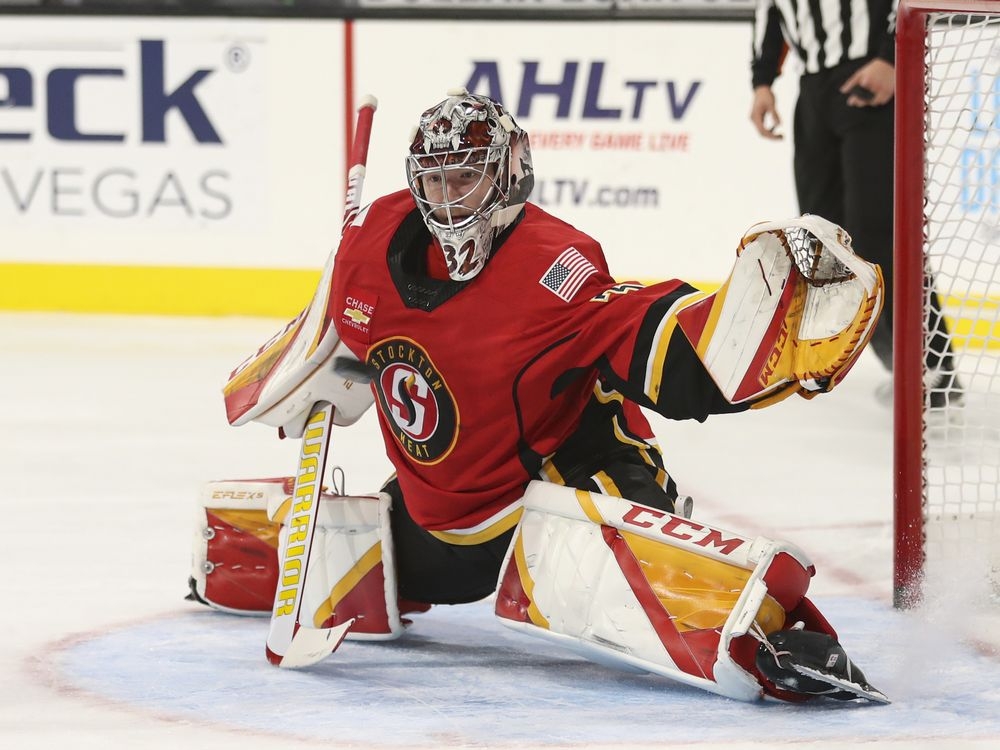 Calgary Flames fans may be getting a glimpse of the future Tuesday.

Not just because the Nashville Predators are a potential first-round playoff foe.

Because Predators starter Juuse Saros is proving that an undersized netminder can still be a stalwart at the NHL level, which is exactly what Flames prospect Dustin Wolf intends to do.

“It’s definitely pretty cool to see,” said Wolf, currently in the midst of a stellar rookie campaign with the American Hockey League’s Stockton Heat. “You know, there’s not many of us that are 6-foot or below and Saros has kind of been the staple the last few years for all the people talking about guys that aren’t behemoths in the net.

“I love the way he plays. I think me and him play a pretty similar style, so it’s awesome to see him have the success he’s having. But obviously, I don’t want to see him play too well against the Flames.”

It’s an off-night for the farm-clubbers, so it’s a safe bet that Wolf will be watching coverage of Tuesday’s battle at Bridgestone Arena (6 p.m. MT, Sportsnet West/Sportsnet 960 The Fan).

After all, this could-be playoff preview pits his future employers against the proof his big-league aspirations are not at all far-fetched.

In an era of monsters in masks, Saros is a beacon of hope for those dudes who will never need to duck through the locker-room door. As Flames goaltending coach Jordan Sigalet reminded: “He proved people wrong, too.”

Indeed, he did. Still is.

Although he was hooked in his last start, Saros leads the league with 37 victories. That’s why you don’t hear nearly as much about this other stat — the fact he is one of the NHL’s smallest puck-stoppers at 5-foot-11 and 180 lb.

Wolf is currently listed by the Heat at 6-foot and 170 lb. No word on whether that includes the extra-large chip on his shoulder, the result of being warned time and time again that he doesn’t cover enough net to tend twine at the top rung. That’s the only reason he was still available in the seventh round — and near the end, too, at No. 214 overall — of the 2019 NHL Draft.

“The biggest thing for him is his hockey sense. I haven’t seen many goalies as smart as him,” Sigalet said of Wolf. “But he needs that quality with his size. Ten years ago, 5-foot-11 or 6-foot wasn’t considered small for a goalie. But for some reason, today it is, even though you have guys like Saros and (Jaroslav) Halak and (Philipp) Grubauer, guys that have done it with that stature.

“Dustin’s hockey sense, his compete level, his consistency throughout juniors and then just his ability to win games … He’ll do anything to win and it’s just been really impressive to watch because it’s been really, really consistent.”

Wolf, who turned 21 over the Easter long weekend, has made the transition to the pro ranks seem like a piece of cake, posting a superb 32-8-4 record to go along with a 2.36 goals-against average and .923 save percentage.

For comparison sake, Saros finished his first campaign in the minors with a 29-8-0 mark and 2.24 GAA and turned aside 92.0% of the shots fired in his direction with the Milwaukee Admirals in 2015-16. Before Wolf burst on scene in Stockton, that was the most Ws by an AHL rookie in recent memory.

“I think you kind of just look at that and think, ‘Man, maybe that can be me in a couple of years, if I just keep doing my thing and getting better,’ ” Wolf said. “I think it’s just a positive outlook that way.”

On Tuesday, Flames fans can see the road map — he’ll be wearing No. 74 in Nashville’s crease. (He will be celebrating his 27th birthday, too.)

Saros, who was sixth in Vezina Trophy voting last season, relies on his athleticism, his positioning and his ability to read the play and track pucks through traffic.

“Those are all things that guys their size need have success at a level where shots are coming a lot quicker and the game is a lot faster,” Sigalet said. “He makes up for it with those qualities.”

That isn’t lost on Wolf, who challenged the Western Hockey League’s all-time shutout record during his stint with the Everett Silvertips but is surprisingly still looking for his first goose egg on behalf of the Heat.

“The skating, the mobility … We don’t have the luxury of being large so we have to be able to move and be able to get to places quicker than others,” he said. “I didn’t see Saros before he was in Nashville at all, but I think a little bit of (Pekka) Rinne rubbed off on him. He makes some saves that you’re just like, ‘How the hell did he do that?’ And Rinne was one of the best at that, I think.

“You watch some of the highlights and his lateral movement is pretty exceptional and I’d say you have to have that being a smaller guy. We have to battle and just find a way. It’s not easy, for sure.”

Nobody is saying it will be easy, but Wolf has a knack for frustrating wannabe sharpshooters, even if they feel like there’s lot of real estate over his shoulders.

It’s worth noting that Saros — a fourth-round selection in 2013 — didn’t become Nashville’s go-to goaltender until he was 24, serving for a few winters as Rinne’s backup and understudy.

With Jacob Markstrom signed to a long-term contract and Dan Vladar showing plenty of promise in a backup role, the Flames won’t rush this prized prospect to the Saddledome. Wolf should be workhorsing in Stockton again next season.

“The biggest thing that sticks out for me is just his consistency in his preparation, his focus, his mental toughness,” Sigalet praised. “He puts the same game on the table every night, no matter who he’s playing or how many shots he’s seeing. He’s unflappable. You can tell the guys love playing in front of him. When they do have a bad game, he covers up a lot of warts for them. And he just battles, in practice too. He’s always wanting to get better and he’s never satisfied with his play.”

That comes, in part, from his determination to silence his critics, those who can’t wait to scream I-Told-Ya-So, to add him to the list of past junior standouts now humming Skee-Lo’s biggest hit — ‘I wish I was a little bit taller … ’ — at their desk jobs.

While NHL stardom is the ultimate goal, Wolf has high hopes for what the Heat could accomplish this spring.

With five regular-season dates remaining, starting with Wednesday’s matchup with the Tucson Roadrunners, the Baby Flames own the best record in the AHL at 43-14-6.

They have a deep and skilled squad, but their undersized backstop is perhaps the biggest key to their success. Some in Stockton believe that Wolf deserves consideration for the Les Cunningham Award as league MVP. He should be in the running for the top-goalie and rookie-of-the-year nods.

Individual accolades, however, couldn’t be further from his mind.

Wolf wants to be a Calder Cup champion — and then he wants to follow Saros’ path to primetime.

“We have a good opportunity to do something pretty awesome, I think,” he said. “As a kid, you want to play in those games where you have an opportunity to win something big. I’ve been a part of some good teams in the past where we have come up short or in the last couple years, COVID kind of took a run at us. So to be a part of a group that has this opportunity … I really believe that we can win it. The next couple of months could be really fun. That’s all I’m focusing on right now and I think everybody else is, too.”