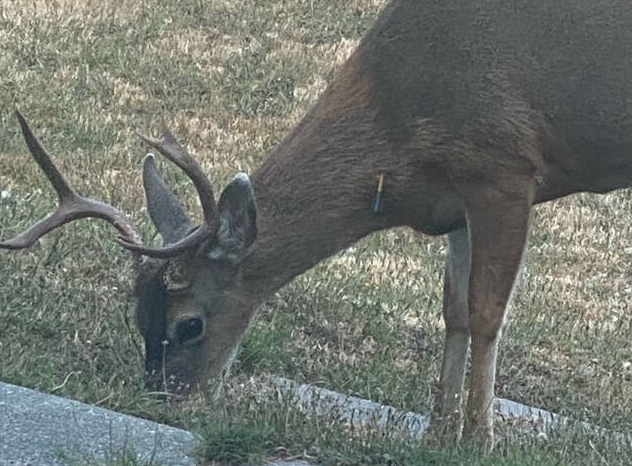 The deer was spotted by a William Head Road resident who posted photos on a local community page, but removed them after getting what he called harassing comments from hunters

Conservation officers are trying to track down a young black-tailed deer seen with a crossbow bolt sticking out of its neck.

The deer was spotted on Thursday by a Metchosin man who lives in the 500-block of William Head Road. He was outraged and posted photos on a local community page, but removed them after getting what he called harassing comments from hunters.

“We just find it very upsetting that someone would shoot this deer and leave it, and it isn’t even hunting season,” said the man, who didn’t want his name used. “We love seeing these deer, but we don’t want to see any animal suffer.”

The young buck is a regular early-evening visitor to the home, often joining three other bucks to graze just a few metres from the front deck, and “rubbing noses” with the family cat.

The man said the bolt is lodged several inches into the deer’s neck. “He seems to be moving around OK, but I think eventually it’s going to kill him, and [infection] could be a slow and painful death.”

The Conservation Officer Service said in a statement the buck remains highly mobile and is still feeding, adding its officers will monitor the animal and attempt to remove the arrow “if a safe opportunity presents itself.”

Officers said anyone who sees the buck in their area should call the Report All Poachers and Polluters (RAPP) line at 1-877-952-7277.

Under B.C. hunting regulations, the open season for black-tailed deer hunting on Vancouver Island is from Sept. 10 to Dec. 10, with the peak during the fall rut in November. Bow-only hunting is permitted from Aug. 25 to Sept. 9.