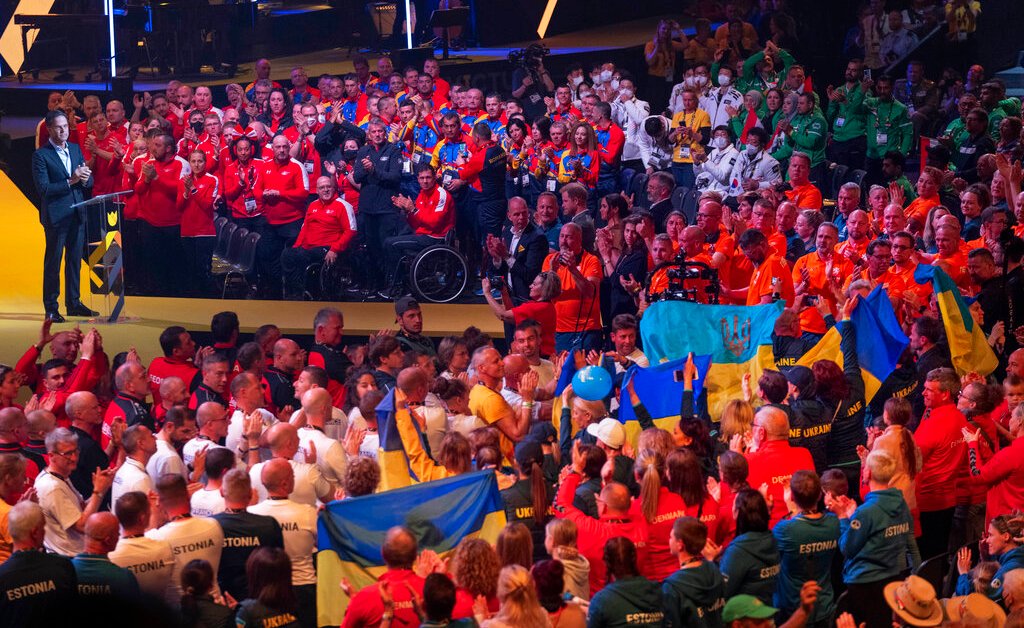 THE HAGUE, Netherlands — The Invictus Games competition for wounded, injured and ill service personnel and veterans opened Saturday night in the Netherlands with a standing ovation and a tribute from Prince Harry for the Ukrainian team members who left their war-torn nation to compete.

With Harry and his wife Meghan in the front row for opening ceremony, competitors cheered for nearly a minute as the Ukrainian team waved their nation’s blue-and-yellow flag after Dutch Prime Minister Mark Rutte welcomed them to the event that was delayed for two years by the coronavirus pandemic.

Harry founded the Invictus Games to aid the rehabilitation of injured or sick military service members and veterans by giving them the challenge of competing in sports events similar to the Paralympics.

Welcoming all competitors, Harry singled out the Ukrainian team and their supporters.

“Your bravery in choosing to come and for being here tonight cannot be overstated,” he said, a day after meeting the Ukrainians at a reception.

“You know, we stand with you. The world is united with you. And still you deserve more. And my hope is that these events, this event, creates the opportunity … of how we as a global community can better show up for you,” Harry added.

Meghan took to the stage before Harry and introduced him, saying: “I could not love and respect him more. And I know that all of you feel the same, because he is your fellow veteran, having served two tours of duty in Afghanistan and 10 years of military service.”

She called Harry “the founder of the Invictus Games and the father to our two little ones, Archie and Lili.”

Earlier in the opening ceremony, the Dutch prime minister said portraits of Invictus athletes that have been placed around The Hague, the city hosting this year’s competition, underscore the “resilience of fortitude in the face of adversity, of vulnerability and strength” of the competitors.

“These are your stories, your lifelines, and the events unfolding now in Ukraine make them resonate even more. I’d like to extend a special welcome to the Ukrainian team,” he said as applause and cheers erupted.

The Ukrainians — many of them taking a brief break from defending their country against the Russian invasion that triggered a devastating war — are among 500 competitors from 20 nations taking part in the games that run through April 22.

Earlier Saturday, competition at the games got underway with a driving challenge around an automotive obstacle course. Harry got close to the action when he was driven around the course. He and Meghan later waved to spectators as they were driven around in miniature Land Rover cars with children at the wheel.

On Friday, the duke and duchess of Sussex, as Harry and Meghan are also known, attended a welcome event for competitors and their friends and family. It was the couple’s first public appearance in Europe since they gave up their formal royal roles and moved to the U.S. more than two years ago, citing the unbearable pressure of their roles and racist attitudes of the British media.