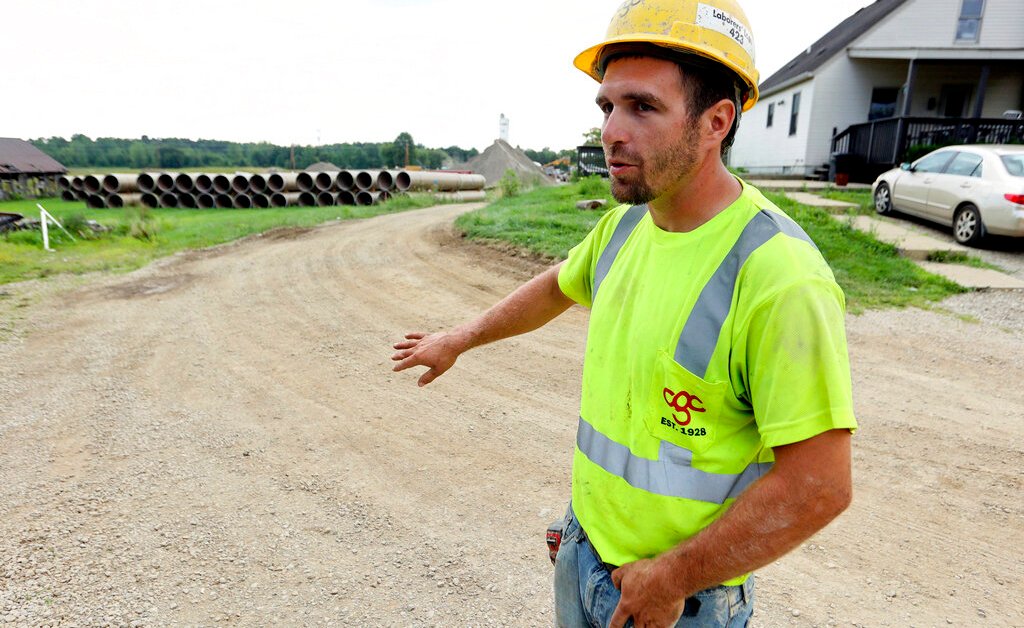 JOHNSTOWN, Ohio — Ohio’s largest-ever economic development project comes with a big employment challenge: how to find 7,000 construction workers in an already booming building environment when there’s also a national shortage of people working in the trades.

At hand is the $20 billion semiconductor manufacturing operation near the state’s capital, announced by Intel earlier this year. When the two factories, known as fabs, open in 2025, the facility will employ 3,000 people with an average salary of around $135,000.

Before that happens, the 1,000-acre site must be leveled and the semiconductor factories built.

“We don’t field calls every day from members hundreds or thousands of miles away asking about transferring into Columbus, Ohio,” he said. “It’s because they know Intel is coming.”

To win the project, Ohio offered Intel roughly $2 billion in incentives, including a 30-year tax break. Intel has outlined $150 million in educational funding aimed at growing the semiconductor industry regionally and nationally.

Construction is expected to accelerate following Congress’ approval last month of a package boosting the semiconductor industry and scientific research in a bid to create more high-tech jobs in the United States and help it better compete with international rivals. It includes more than $52 billion in grants and other incentives for the semiconductor industry as well as a 25% tax credit for those companies that invest in chip plants in the U.S.

For the central Ohio project, all 7,000 workers aren’t required right away. They’re also only a portion of what will be needed as the Intel project transforms hundreds of largely rural acres about 30 minutes east of Columbus.

California-based Intel will rely on lessons learned in building previous semiconductor sites nationally and globally to ensure enough construction workers, the company said in a statement.

“One of Intel’s top reasons for choosing Ohio is access to the region’s robust workforce,” the company said. “It will not be without its challenges, but we are confident there is enough demand that these jobs will be filled.”

Labor leaders and state officials acknowledge there’s not currently a pool of 7,000 extra workers in central Ohio, where other current projects include a 28-story Hilton near downtown Columbus, a $2 billion addition to The Ohio State University’s medical center, and a $365 million Amgen biomanufacturing plant not far from the Intel plant.

And that’s not counting at least three new Google and Amazon data centers, plans for a new $200 million municipal courthouse south of downtown Columbus and solar array projects that could require nearly 6,000 construction jobs by themselves.

Federal data shows about 45,000 home and commercial construction workers in central Ohio. That number increased by 1,800 from May 2021 to May 2022, meaning a future deficit given current and future demands.

Or as Lt. Gov. Jon Husted, the state’s economic development point person, puts it, the Intel project is so big and lucrative it will create opportunities for people who didn’t see construction jobs in their future.

“When you’re willing to pay people more to do something, you will find the talent,” he said.

In addition to new and out-of-state workers, some will likely be pulled from the residential construction industry, thinning out an already short supply of homebuilders, said Ed Brady, CEO of the Washington, D.C.-based Home Builders Institute.

That creates a housing shortage risk that could slow the very type of economic development that Intel is sparking, said Ed Dietz of the National Association of Home Builders.

“How do you attract those business investments if you can’t also provide additional housing available for the growth in the labor force?” he said.

Read More: Return to the Office? Not in This Housing Market

Central Ohio is expected to reach 3 million residents by 2050, a rate that would require 11,000 to 14,000 housing units a year. That was before Intel was announced, said Jennifer Noll, the Mid-Ohio Regional Planning Commission’s associate director for community development. Meanwhile, the closest the region came to hitting that goal was in 2020 with 11,000 units.

“We know we’ve got some work to do as a region,” Noll said.

Shortage or not, work is underway at and near the Intel site, where parades of trucks rumbled down country roads on a recent August morning as the beeping of multiple construction vehicles sounded in the distance.

It was just another day for pipe layer Taylor Purdy, who made his regular 30-minute drive from Bangs, Ohio, to his construction job helping widen a road running alongside the Intel plant.

Purdy, 28, spends his days in trenches helping position storm and sanitary sewers and waterlines. Overtime is plentiful as deadlines approach. The Intel construction work is in its earliest phases as earthmovers reshape the 1,000 acres (400 hectares) of former farm and residential land being transformed into an industrial site.

Purdy said he likes the job security of being involved on such a big project. He’s also noticed that, unlike other jobs he has worked, he does not need to explain to people what he is up to.

“They all know what I’m talking about,” he said.