In Katoomba, west of Sydney, it reached -1.5C but felt like -7C, leading to a ground-blanketing snowfall.

Drivers have been advised to avoid travel in the Blue Mountains due to black ice on the roads.

More snow fell in parts of Victoria, days out from the beginning of spring on September 1.

Meanwhile, a severe weather warning is in place across New South Wales today.

Surf and swell is expected to be hazardous along the coast from Byron Bay to the Illawarra.

Residents are advised to stay out of the water.

The cold front that has brought the snow and freezing temperatures has already moved offshore, meaning that the weather won’t stick around.

But today, Sydney and much of NSW can prepare for a very cold, gusty day.

In Melbourne the weather is likely to be similar, with a chance of rain in the afternoon.

Due to the weather conditions there, is no forecast of when these roads will reopen.

Additionally, trains on the Blue Mountains Line are running late due to heavy snow and ice on the tracks.

Passengers are advised to delay their trips. 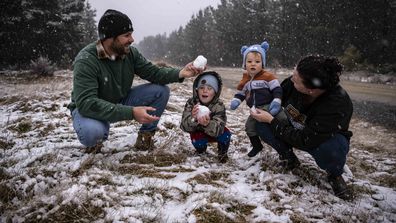