Back in Washington on Sunday evening, Mr Biden told reporters he was not calling for regime change in Russia — echoing a message spelled out multiple times by his subordinates even before he had returned to the US.

But the global reverberations from the remarks leave the administration facing grave questions. Some are strategic and could impact the future course of the war and so-far elusive hopes for a ceasefire.

Others are political and relate to Mr Biden’s standing at home, amid a torrent of Republican criticism, and internationally, as he seeks to keep the Western coalition together.

It was clear from the speed with which administration officials worked to clarify Mr Biden’s remark that they knew it could be a big problem that could potentially make an already fraught European geopolitical showdown much worse.

In a jab not in his scripted remarks, Mr Biden said, “For God’s sake, this man cannot remain in power” in a reference to Mr Putin.

A White House official said Mr Biden meant that “Mr Putin cannot be allowed to exercise power over his neighbours or the region” and said Mr Biden wasn’t referring to regime change.

Secretary of State Antony Blinken was even more categorical during a trip to Jerusalem on Sunday.

“We do not have a strategy of regime change in Russia, or anywhere else for that matter,” Mr Blinken said.

“In this case, as it is in any case, it’s up to the people of the country in question. It is up to the Russian people.”

The clean-up language was hardly convincing given the clear context of the original quote. But a remark with such implications in a time of high tensions clearly needed walking back. And quickly.

Any idea that the US saw the conflict as an attempt to unseat Mr Putin would be dangerous since it would elevate the clash to a direct confrontation between the United States and Russia.

Mr Biden has scrupulously tried to avoid that scenario — notably blocking a Polish plan to send Soviet-made fighter jets to Ukraine to avoid the impression that NATO is taking a more direct role in the war.

The situation is already on a knife’s edge since huge Western shipments of anti-aircraft and anti-tank missiles are fuelling Ukraine’s strong resistance and apparently causing heavy Russian casualties.

A propaganda present for Putin

There’s no doubt that Mr Biden handed Mr Putin a propaganda gift that could undermine the US President’s own hard work in keeping the focus on Ukraine.

Moscow’s information complex is certain to present the war to the Russian people as a hostile push by the West in order to further obscure the truth about the unprovoked attack on Ukraine. This could ease the political pressure the West hopes will be built by harsh sanctions designed to change Mr Putin’s calculation.

But Mr Biden’s initial efforts to avoid personalising the conflict with Mr Putin and characterising the war as a direct US-Russia showdown have been undermined by his own hardening rhetoric toward the Russian leader in recent days.

He made it known earlier this month that he believes that Mr Putin is a war criminal after relentless attacks on Ukrainian cities and civilians that triggered a massive refugee exodus.

Mr Biden’s comment about the Russian leader’s tenure on power was not the only striking rhetoric of his tour.

After meeting refugees on Saturday, Mr Biden called Mr Putin a “butcher”. Previously, Mr Biden had called him a “thug” and a “murderous dictator”.

And the script from which he departed to make the now notorious remark was in itself hawkish, previewing what Mr Biden said was a long struggle, which sounded a lot like a new Cold War.

Given that Mr Biden is likely feeling the burden of world peace on his shoulders and acute empathy for those visited by unspeakable tragedy in Ukraine, his outbursts on his European trip may be understandable as a human reaction to great suffering.

“He went to the National Stadium in Warsaw and literally met with hundreds of Ukrainians,” US ambassador to NATO Julianne Smith told CNN’s Dana Bash on State of the Union on Sunday.

“In the moment, I think that was a principled human reaction to the stories that he had heard that day,” she said, underscoring again that the US didn’t have a policy of regime change in Russia.

But a president’s words must also be carefully chosen. As Saturday’s drama showed, it takes just a moment to cause a dangerous diplomatic crisis.

Republicans plead with Biden to keep to the script

Mr Biden was largely successful in reversing his propensity for gaffes during his 2020 election bid, during a campaign robbed of spontaneous moments by the COVID-19 pandemic. It was unfortunate that his old habits of speaking his mind at inopportune moments resurfaced now.

Republicans seized on the President’s frank comments on Sunday, seeking to dent an impression that Mr Biden has responded well to Mr Putin’s provocations so far in the Ukraine crisis.

Clearly, they didn’t just have national security in mind but also politics ahead of the midterm elections, which are being shaped by the President’s diminished approval ratings.

And in some of the criticism there was a sense Republicans were playing into the conservative media trope that Mr Biden is old, is not in full control and could blunder the US into a war.

Such a position conveniently forgets the tolerance of right-wing opinion hosts towards ex-President Donald Trump’s volcanic rhetoric, but it has power in the GOP grassroots.

Speaking on CNN’s State of the Union, Idaho Senator Jim Risch, the top Republican on the Senate Foreign Relations Committee, appeared both to be underlining the administration’s message about being opposed to regime change in Moscow while also finding a way to hammer Mr Biden’s capacity to lead.

“There was a horrendous gaffe right at the end of it. I just wish he would stay on script,” the Idaho Republican said, while praising Mr Biden’s speech in Poland.

He said the administration had “done everything they can to stop escalating” but “there’s not a whole lot more you can do to escalate than to call for regime change.”

“First, I think all of us believe the world would be a better place without Vladimir Putin,” Portman said on NBC’s Meet the Press.

Mr Biden’s comments sent shockwaves through Europe as well as Washington. And they appeared to irritate French President Emmanuel Macron, who has been a key figure in trying, with little success, to get Mr Putin to agree to a ceasefire.

“I wouldn’t use terms like that because I’m still in talks with President Putin,” Mr Macron told the France 3 television channel, when asked about Mr Biden’s comment that the Russian leader was a “butcher”.

Any future ceasefire deal Mr Putin agrees to is unlikely to emerge from US diplomacy given the deep and mutual hostility between Moscow and Washington. 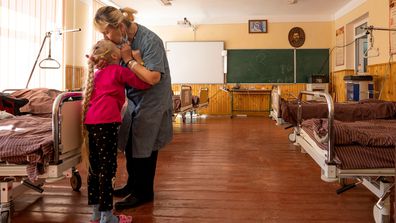 But any final agreement — and indeed the long-term goal of preventing dangerous escalations between the world’s top two nuclear powers — depends on them talking to one another.

It was already hard to see how Mr Biden could meet a Russian leader whom he has branded a war criminal. This weekend’s events made that even more difficult.

And while the US goal in Moscow is not regime change, it’s hard to see any meaningful dialogue while Mr Putin is still in charge.

Stephen Collison is a reporter for CNN Politics covering the White House and politics across the United States and around the world.