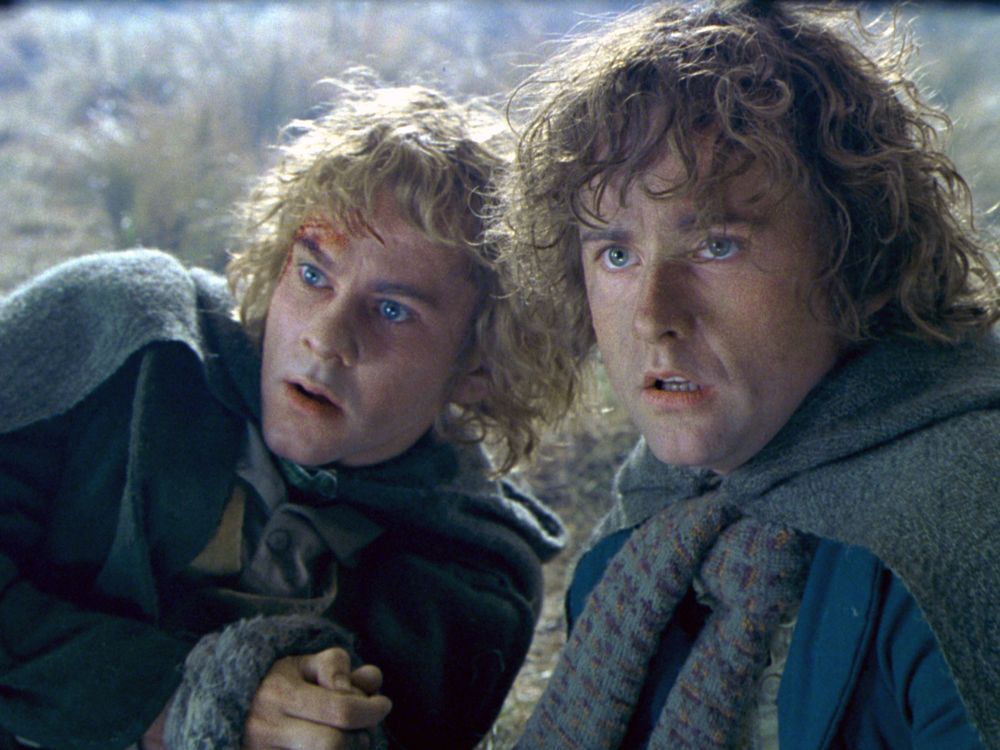 Early this year, Billy Boyd and Dominic Monaghan were discussing how the dialogue in the Lord of the Rings trilogy could have been spiced up a little.

Minutes before the two actors were about to start recording an episode of their podcast, The Friendship Onion, Monaghan told Boyd that he had just read something interesting about films rated PG-13. Apparently this rating allows for one good swear to be inserted into the dialogue. Filmmaker Peter Jackson and his screenwriters did not take advantage of this opportunity. But it became a spirited topic of discussion on the podcast that day for Boyd and Monaghan, who played Hobbit pals Pippin and Merry in Jackson’s trilogy. They came up with their own suggestions, of course, but then went to their audience for submissions of how the LOTR dialogue could have been enhanced by some curse words.

“We just thought it was hilarious that PG-13 allowed one swear word,” says Boyd. “People are still sending hilarious ideas of where that could be and some of them actually work really well.”

Being a family newspaper, we can’t share these examples. But Boyd said he was particularly impressed by one fan’s suggestion for peppering up a climactic scene in The Fellowship of the Ring, where the half-elven warrior Arwen (played by Liv Tyler) is being pursued by the dreaded Black Riders after rescuing Frodo (Elijah Wood.) When they reach the river, Arwen draws her sword and heroically faces her pursuers with the fierce line: “If you want him, come and claim him.”

One enterprising fan suggested that a well-placed f-bomb would have made the line all the more dramatic, Boyd says.

“And you think ‘That would work! That would really work!’ ” says the Scottish-born actor, who will be joining Monaghan and fellow Hobbits Sean Astin and Elijah Wood at Calgary Expo for a reunion on Saturday, April 23.

As besties and cousins Pippin and Merry in the trilogy, the duo played off each other with perfect timing and often offered a good dose of comic relief to break up the action.

Those who have watched the trilogy, listened to the podcast or even caught Boyd’s guest appearance on his friend’s highly entertaining bug-chasing nature program Wild Things with Dominic Monaghan a few years back, know the two share special chemistry that suggests they have been lifelong friends.

But the two didn’t actually meet until they began filming in 1999. Monaghan was the last Hobbit to arrive on the New Zealand set because he was busy touring a play in Europe.

“We’d already been there for a couple of weeks,” Boyd says. “I remember them saying ‘The actor  that’s playing Merry arrives today.’ So I ran up to wardrobe and we had a big hug and we went out and played some pool and had a time. I thought ‘Yeah, this is good. This will work out alright.’ ”

“Straightaway I knew that, yeah, he was on the same sort of wavelength,” he adds. “He brought that sort of British kind of comedy, ironic sort of thing. So, straight away, I think we knew. And we made each other laugh out loud on set. To this day, it’s still the same. It’s hard to look at Dom if we’re trying to be serious. He always has a glint in his eye that can set me off really fast.”

Of the four reuniting Hobbits, only Monaghan is new to Calgary Expo. Astin, who played Samwise Gamgee, was here in 2014 alongside Boyd for a LOTR event and returned in 2019 as part of a Goonies reunion. Wood, who played Frodo Baggins, was here in 2018.

We apologize, but this video has failed to load.

Boyd, whose fandom bonafides include 2012’s Witches of Oz and a recurring character in Outlander, performed with his band, Beecake, at Dickens Pub during his 2014 visit to the city. The band shot a video for the song Nothing Has Changed while in Calgary.

While all four Hobbits have remained friends since shooting the trilogy – both Astin and Wood have been among the Ring alumni who have been guests on the Friendship Onion – Boyd reckons this is the first time the four will have appeared together at a convention.

“I honestly can’t remember the last time we were all together,” he says. “Obviously, me and Dom see each other every week. I would see Sean without the other boys, or see Elijah for dinner with Orlando (Bloom) or something. But the actual four Hobbits together, I can’t think even socially the last time that has happened. I know that it has never happened at an event, which is really exciting.”

More than 20 years have passed since the filming of the trilogy, an experience that Boyd describes as “our own adventure.” Locked inside their “New Zealand bubble”, he says he doesn’t remember feeling much pressure over the daunting prospect of bringing J.R.R. Tolkien’s mammoth epic to life.

“I think we all knew that it was an exciting project when we did it,” Boyd says. “But I don’t think anyone thought it was going to be what it was and still is. It’s lovely going to events because you meet people who used to line up to see it at Christmas every year when they were coming out. But now we have to remember that was 20 years ago. It’s incredible. Now they are introducing their kids to it. It’s great to see people’s kids coming dressed as Hobbits and another generation watching the films. It’s hard to put into words what a big part of my life that it is.”

Billy Boyd will be appearing at Calgary Expo, at Stampede Park, on Friday, April 22, Saturday, April 23 and Sunday, April 24. Second Breakfast with Billy Boyd will take place Friday at 2:15 p.m. An Evening with the Hobbits is a ticketed event on Saturday at 7:30 p.m.