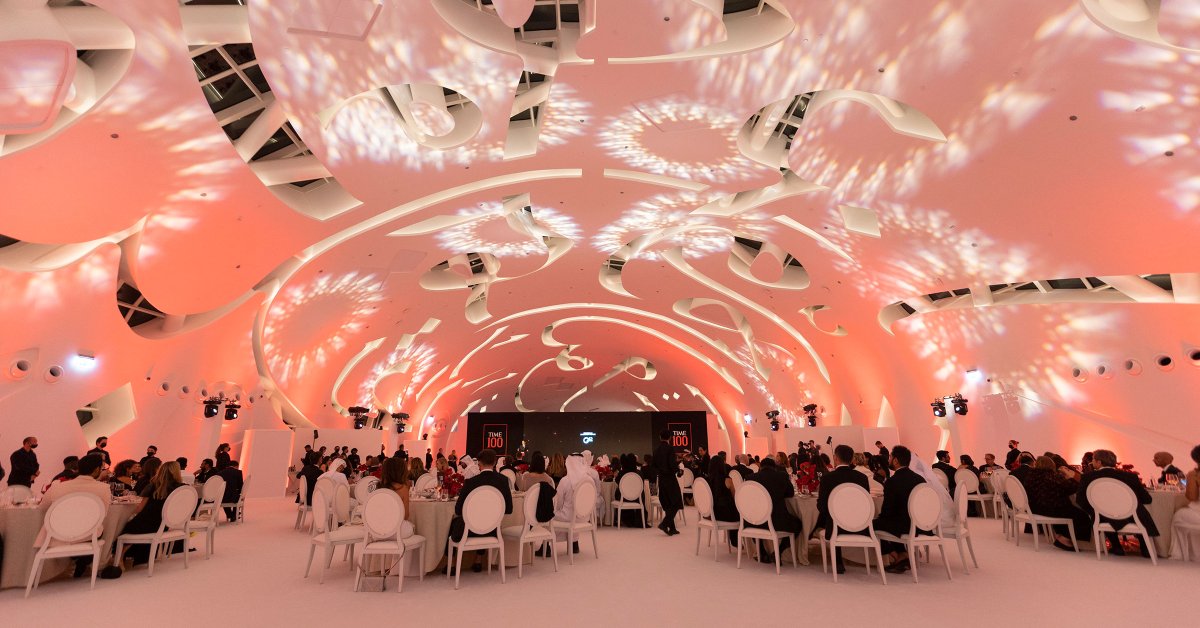 If you haven’t yet heard of the Museum of the Future, it’s not because you’re living in the past. The new museum opened in Dubai in February 2022, a seven-story, elliptical structure inscribed with Arabic script, outside and in. It’s a striking new part of Dubai’s cityscape.

On Monday night, it was also the scene of the inaugural TIME100 Impact Awards and Gala, which doubled as the museum’s first official event. On the cavernous, pristine white-carpeted seventh floor, 200 guests gathered to celebrate leaders who are building, shaping, and articulating a better future for the world.

That’s all important, but as presenter, TIME100 alumnae, supermodel, and—most recently—ice-cream entrepreneur Tyra Banks noted in an off-the-cuff speech, so is staying down to earth. “I’m gonna keep it real,” she said, first explaining that she had been hearing about the Museum of the Future for months but only just realized that it was in, fact, Dubai’s newest landmark. And there was more: “When I sat down in my chair, my pants busted open. And I was like, I don’t know what to do. But yeah, it’s time to just keep it real tonight,” she said brightly.

Then, she introduced beauty mogul Huda Kattan, the last honoree of the evening, who drove home the whole point of the night: that each of us has the power and influence to make an impact, because we all have access to platforms to share what matters. (Kattan began her career as what some might call an “influencer” and grew a major social media presence, but reinforced the fact that everyone has the opportunity to influence others.)

Tyra Banks poses for a photo with honoree Huda Kattan at the TIME 100 Impact Awards and Gala.

It was an evening meant to reflect just that, as an eclectic mix of guests and honorees came together under the arching, sculptural ceiling of the museum. Attendees included a range of TIME100 alumni from around the world, government leaders, and royals from across the U.A.E. and Middle East, as well as business leaders from companies like crypto exchange FTX and artificial intelligence group G42.

There was African billionaire philanthropist and fellow Impact Award honoree Tony Elumelu chatting with Kattan, for instance, in between dinner courses—maybe about NFTs, her most recent area of investment, as she shared earlier on the red carpet. And there was honoree will.i.am speaking with star actor and fellow honoree Deepika Padukone, who was draped in a golden, glittering gown.

Other honorees for the night included renowned architect David Adjaye, U.A.E. Minister of State for Advanced Technology and Chairwoman of the U.A.E. Space Agency Sara Al Amiri, and platinum-selling musician Ellie Goulding, each of whom shared thoughtful acceptance speeches about the connections they’ve made between their work and their passions for shaping a better tomorrow for their communities and others.

Opening the evening, TIME CEO and Editor-in-Chief Edward Felsenthal articulated the importance of the event. “At TIME, our mission is to shine a light on the people shaping the world, and we see this evening as the start of a powerful new chapter in that work,” he said. While recognizing the many crises the world is currently facing—political, environmental, humanitarian—he also gestured to the importance of acknowledging the progress we’re making toward solutions—especially with the help people like those honored by the TIME100 Impact Awards. “As journalists, my colleagues and I work in a deadline business. And our deadline, the deadline for all of us… is now.”

But the overall tone of the night was one of conversation—and celebration. Yvonne Aki-Sawyerr, the mayor of Sierra Leone’s capital city, bopped her head to Goulding’s performance of “Love Me Like You Do,” while actress Kat Graham sat in the front row in an eye-catching yellow gown. “It’s such an honor to be here, and I know that sounds very cliche to say, but for an artist, it’s not enough to make art if it doesn’t have meaning,” Graham told TIME.

Ellie Goulding performs at the at the TIME 100 Impact Awards and Gala at the Museum of the Future in Dubai.

Investor Lucy Chow knew what Graham meant. Attending with her father, who was visiting from Canada, Chow—who has called Dubai home for more than a dozen years and is the director of the Women’s Angel Investing Network—beamed as she looked around the room. “I always say to entrepreneurs, you can make an impact and still be a profitable business,” she said, referencing the many honorees who have mixed their successful work with forwarding a cause. “I don’t think there’s a better place to have your inaugural awards than a nation that already believes in the power of connectivity.”

It was a Monday, so the crowd didn’t linger too long past midnight. The work of the week beckoned.

Write to Raisa Bruner at raisa.bruner@time.com.