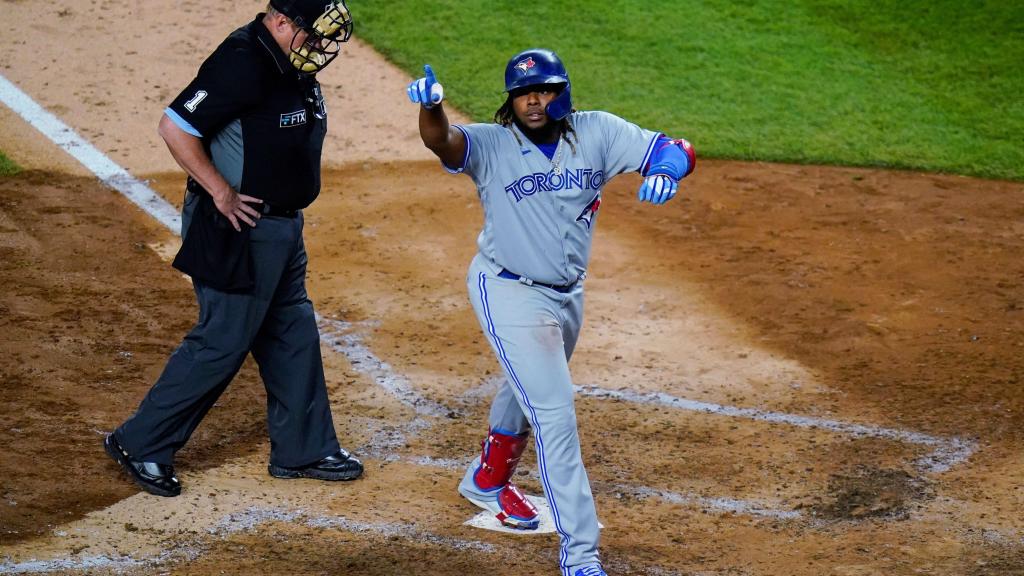 All Gerrit Cole could do was literally tip his cap.

Vladimir Guerrero Jr. had his way with the Yankees ace Wednesday night, hitting two home runs and a double off Cole — and another homer off Jonathan Loaisiga — as the Blue Jays beat the Bombers, 6-4, at Yankee Stadium.

“I mean, did you see the night? I mean, if you had a cap you’d tip it too,” Cole said of actually tipping his cap to the Blue Jays first baseman. “And it got better after that too, my goodness.”

Guerrero Jr., who had been hit-less in the first two games of the series, had his second-career three home run game, driving in four runs and absolutely dominating the Yankees (3-3). Aaron Judge and Gleyber Torres each had their first home runs of the season. Anthony Rizzo had his third and DJ LeMahieu drove in a run, but it wasn’t enough to keep up with Guerrero Jr. and the Blue Jays (4-2).

“That was impressive tonight. Wish it was against somebody else and I was watching on TV and I didn’t see it live,” Judge said. “That’s the type of player he is. He can take over a game. Those were three impressive swings. Even more impressive, with two strikes shooting a double down the right field line. He is a game changer.”

A game-changer is what the Yankees are hoping to have in Cole.

So far, the Yankees ace has not exactly redefined himself after last year’s struggles and the disastrous loss to the Red Sox in the American League Wild Card Game.

Wednesday night, Cole labored through 5.2 innings, allowing three earned runs on four hits. He walked one and struck out six. Cole had 17 swing-and-misses, including four each on his four-seam fastball, his cutter and slider.

Guerrero Jr., hammered a hanging slider in the first inning for his first homer of the night off Cole. In the third, with Bo Bichette on, Guerrero — who had to have his hand bandaged after Aaron Hicks stepped on it — turned on a 98 mile per hour fastball up and inside and sent a laser into left-center field for his third homer of the season (and second of the night). In the sixth, Guerrero went down and got a 98 mph fastball at the knees and lined it into the right-field corner for a double.

“He’s just a great hitter,” Aaron Boone said. “I thought the first home run to center was a hanger that he took advantage of… but then after that it was just kind of other-worldly hitting. … Just a really good job of hitting and then you don’t see many right-handers elevate the ball like that off of (Loaisiga’s) two-seam fastball and he obviously squared it up. So pretty impressive display by him, and we got beat by obviously a great hitter.”

The Yankees’ brightside was that Cole held every other Blue Jay to just one hit.

Cole was slow to ramp up, making just two starts to the rest of the staff’s three, in a lockout-shortened spring training. He gave up a homer and three runs in his season debut, a no-decision against the Red Sox, which only brought back the nightmares from the Wild Card loss. Wednesday night, he lost the battle to Guerrero Jr. and the Blue Jays, another star and team who the Yankees are going to battling this season in the division and for a playoff spot.

Cole thinks he is almost where he needs to be.

“I still blew through the tempo on a few, especially some first pitches, but it’s just… it’s just coming,” Cole said. “I mean, the stuff looks pretty good. And the execution for the most part is pretty good. So, just crisp up the reads a bit and execute a few more pitches.”

The Yankees fans are hoping the dominant stuff that had the Yankees courting him and signing him to a nine-year, $324 million deal in December 2019 is coming too. He needs to rebuild the Yankee fans’ confidence that he will be the bulldog they need in big matchups and playoff games.

So far, that hasn’t been there.