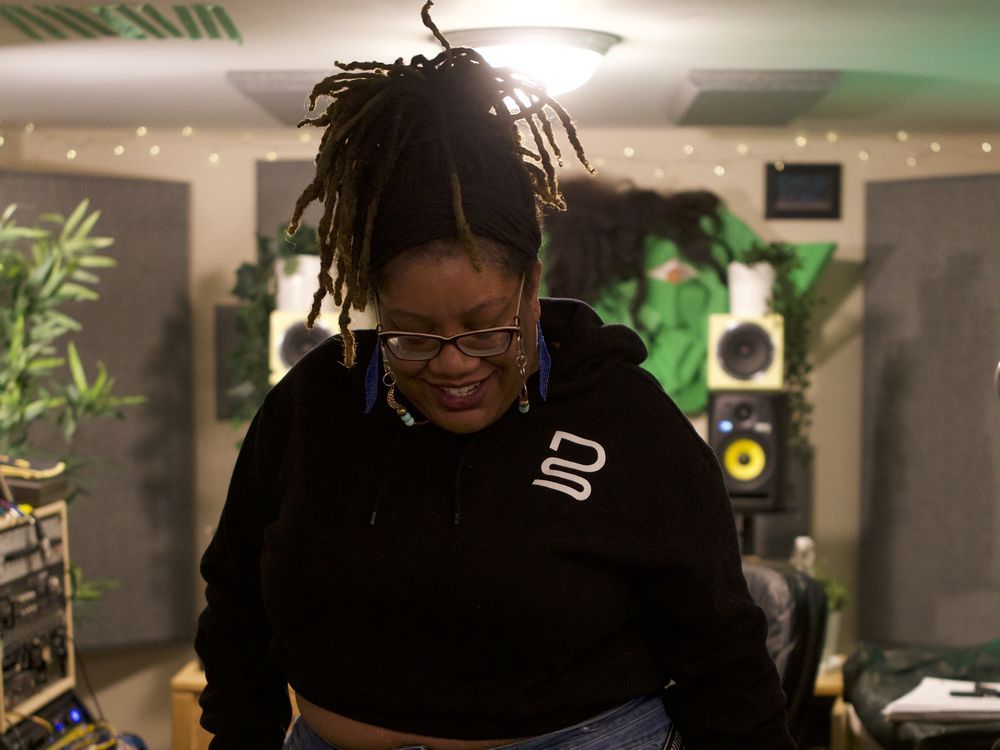 When Tea Fannie appears as part of the Blue Jay Sessions on May 26, the Calgary hip-hop artist plans to perform an acoustic version of one of her songs.

This is not simply the case of an artist adapting to the format of the sessions, which in the past have tended to showcase singer-songwriters with a focus on country music. After all, Fannie’s inclusion in the lineup seems to be an attempt to widen the scope of the Blue Jay Sessions: Spring Remix, which runs from May 26 to 29 at the Prairie Emporium. She is the first hip-hop artist to participate in the sessions, which began in 2019.

But the Calgary artist has never been completely comfortable being labelled a hip-hop artist. While her career is still relatively new – she didn’t set foot on a stage until 2019 – her prolific output has already defied easy pigeonholing.

“I still find it tough to define my genre,” she says. “I want to say I’m genre-fluid. Because I grew up listening to so much stuff and I still listen to random stuff to this day, I find that I don’t want to just say it’s hip-hop. I hold hip-hop so close to my heart. (To me) hip-hop like Nas or Jay-Z, is old-school. To say that it’s trap is weird. I can’t put a genre on it.”

This hasn’t prevented Fannie from becoming one of the city’s more interesting R&B-influenced hip-hop artists, a position she has earned in a relatively short period. Last year, she released the acclaimed duet album Most Hated with soul-R&B singer Miss Benzo, a deceptively titled collection of infectious, empowering tracks. Earlier this year, she released a four-song live EP that captured a lively performance at Calgary’s Palomino Smokehouse. Her first two albums, Tea Time and Hello!, were both released in 2020 and introduced Fannie as an assured hip-hop artist with a knack for defiant, humour-laced wordplay.

Last week, the triumphant Go Flames Go was released to YouTube. The track, produced by LiL GoDD and DJ SlimInk, reunited Fannie with Miss Benzo and had them join forces with Darian King and Jesse Peters for a playoff anthem.

“I didn’t know much about hockey,” Fannie says. “I’m a Raptors fan so I interviewed random drunk fans at Palomino.”

But some of her other recent or upcoming collaborations are a little more unusual, even for a hip-hop artist known for blurring genres.

That includes a hip-hop remix of singer-songwriter Samantha Savage Smith’s trippy and largely instrumental curio ESGGallin, which Fannie performed with Smith at the latter’s album launch in April. In June, she will be recording with Edmonton country artist and Blue Jay session favourite, D’orjay the Singing Shaman. She is also working with Vancouver-based country-pop artist Dust Cwaine.

“Funny enough, my mom is obsessed with Kenny Rogers,” Fannie says. “I grew up listening to all of that. When Wyclef came out and remixed one of Kenny Rogers’ songs, The Gambler, oh, that was great. That was my favourite. Kenny Rogers was one of the first vinyls I had in my house. Even when you go to Jamaica, if you go toward the countryside on Sunday morning, all you hear is country music through the valley. Country music is so big in Jamaica. But it’s like the old-school, soul-country. Not the super new, dance-y type country.”

Fannie’s mother is from Jamaica and her father is from Dominica. Fannie was born in Victoria, but her father was in the military so they moved around a lot. Now Calgary-based – her parents own the Caribbean restaurant Simply Irie downtown – she has also had stints in Edmonton. She was there in 2019 when a producer heard her performing some impromptu rap in a garage and asked her to “come up with a hook.” While she had written poetry before, crippling stage fright had always prevented her from even reciting it to friends. So a career as a hip-hop performer initially didn’t seem in the cards. But she was eventually challenged to come up with 15 minutes worth of material for a showcase at an Edmonton club.

“I took a bunch of old-school Pink beats and No Doubt beats and rapped over them,” she says. “That was my 15-minute performance because I had no music yet.”

As part of the Blue Jay Sessions, Fannie is scheduled to participate in the recording of a version of Tina Turner’s Simply the Best with Amy Hef and Nice Horse. She is also working on her own music with various collaborators. That includes Toronto producer Junia-T, best known for his 2020 Polaris Prize short-listed album Studio Monk. She plans to have a single out by September.

While her prolific output thus far may suggest otherwise, Fannie says she is planning to take a more measured approach to releasing music.

“I’m working on doing things more properly,” she says. “I’m still pretty new. I released my first single in 2020. I’ve just been doing everything on my own and releasing music. But now I’m doing it properly, taking the time to market it and all that stuff.”

The Blue Jay Sessions: Spring Remix will be held May 26 to 29 at the Prairie Emporium. Tea Fannie plays May 26 at 7 p.m. alongside Robert Adam, Madison Olds and Emét. Visit thebluejaysessions.com