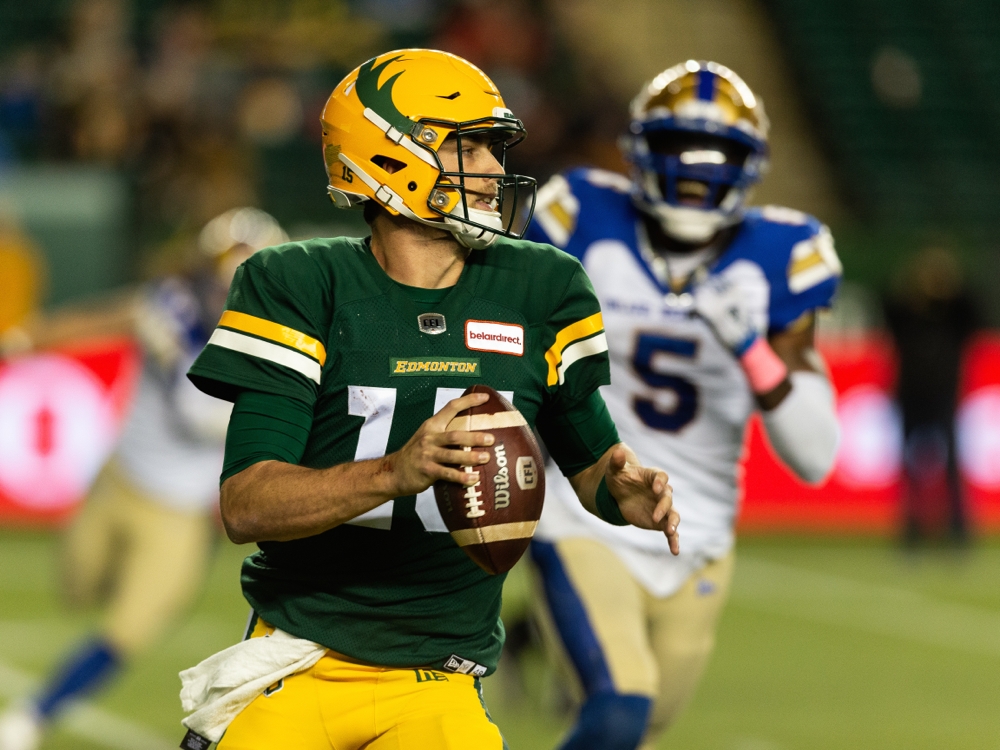 HOME TURF: The Elks have now hit double digits when it comes to successive home losses, dropping their 10th in a row in a 49-6 loss to the Calgary Stampeders their last time out. The last win the Green and Gold faithful witnessed at Commonwealth Stadium came in a 19-6 win over the B.C. Lions on Oct. 12, 2019 — 1,014 days ago … and counting. Across the league, home teams came into this week 14-9 (.609) this season. Winnipeg is riding a three-game road-win streak.

WORST VS. FIRST: It doesn’t get anymore ‘opposites attract’ in the Canadian Football League’s West Division than Edmonton and Winnipeg. The Bombers sit atop the standings at 6-0, while the Elks are 2-4, sitting in the basement looking up at the rest of the division – all four of whom have better records than any team in the East. That leaves the Elks as the odd-herbivore out if playoffs were to start tomorrow.

QB COMPARISON: As far as quarterback comparisons go, there really isn’t one here. The Elks are 2-7 with Taylor Cornelius at the helm over the past two seasons, while the Bombers’ Zach Collaros leads the league with 1,536 passing yards and is on pace to pass for 4,608, which would surpass his previous high of 3,376 in 2015. He’s also on pace for 27 TD passes, two more than his top performance in 2015.

HANDS DOWN: Both the Elks and the Bombers are missing a star pair of hands this week, with league-leading receiver Greg Ellingson on the mend in what would have been his first game against his former team. He’s atop the pack with both 518 yards and 34 receptions — that’s one more catch and 34 more yards than his replacement, Kenny Lawler, who’s fifth overall. Edmonton, meanwhile, is down wide-out Derel Walker, who sits third on his team with 22 catches for 247 yards.

HARRIS-LESS: Say what you will about his recent steroid scandal, but there is no denying the Blue Bombers are a different team without veteran running back Andrew Harris. So far this season, they are averaging 83 yards per game on the ground without him, compared to 120 per game with him a year ago, including 156 per game over the final-third of the season.

Last week, the CFL’s reigning receiving-yards leader was a one-receiver wrecking crew, as Lawler combined for 92 receiving yards and added another 108 yards worth of defensive pass interference calls when he showed Montreal Alouettes DB Wesley Sutton was no match in one-on-one coverage. This time, Lawler will be coming up against the Bombers top cover man in Nichols, who is coming off CFL all-star honours from his inaugural year in the league.

Mike O’Shea is 9-8 against Edmonton as a head coach … Blue Bombers LB Adam Bighill has moved into eighth on the all-time tackles list with 767, passing Greg Battle (766 tackles) … Winnipeg QB Zach Collaros hasn’t thrown an interception in his last 82 attempts … Elks SB Kenny Lawler’s 92 receiving yards last week was 21 more yards than his last three games … Edmonton S Scott Hutter has a fumble recovery in each of his last two games and forced another for the game-winning touchdown against Hamilton before that … Bombers DE Willie Jefferson didn’t register a sack in the first two games, but has three in their last four, along with four pass knockdowns at the line of scrimmage … Edmonton has been out-gained in yards in all six games so far … Winnipeg is looking to go 7-0 for the first time since 1960, when they won their first 10 games.

WPG 29, EDM 9: The Elks have been blown clear out of the water on a couple of occasions already, falling 59-15 in their season-opener in Vancouver before a 49-6 loss at home in the Battle of Alberta. This one has all the marking of another lopsided affair if the Elks aren’t careful. But even if they are, their 10-game losing skid at home isn’t likely to end at the hands of the first-place Blue Bombers.