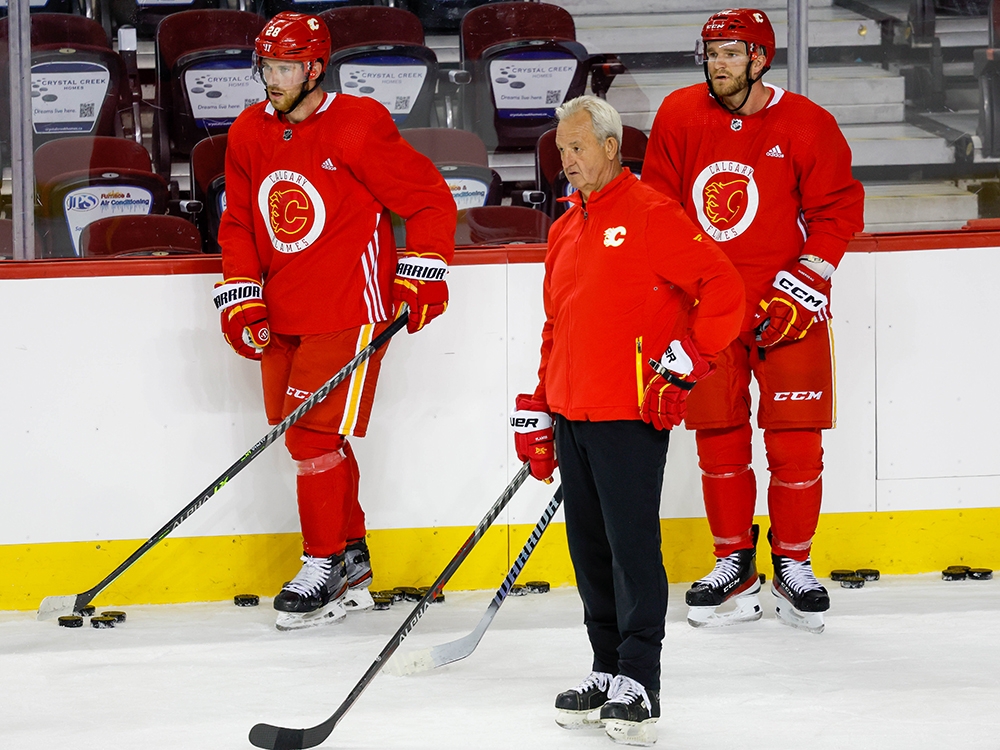 Jonathan Huberdeau is settling into his new surroundings quite well, thank you very much.

And he’s shopping for a cowboy hat.

“Gotta go buy that,” said Huberdeau, after his first official skate with the Calgary Flames — Day 1 of training camp Thursday at Scotiabank Saddledome.

“It’s exciting,” continued the team’s prized trade acquisition of the off-season. “A little bit of nerves. I mean … I think messed up through the first three drills. But it’s going to be that the first few days and then things are going to be good after that.”

That’s certainly the hope anyways for the revamped Flames, as a number of fresh highly-skilled faces — Huberdeau, fellow forward Nazem Kadri and defenceman MacKenzie Weegar — try to fit in quickly with the club.

Huberdeau, of course, came over in the big summer blockbuster that saw fan-favourite Matthew Tkachuk shipped the other way to the Florida Panthers. The native of Saint-Jérome, Que., was traded from the South Florida squad along with Weegar, prospect Cole Schwindt and a conditional first-round pick in the 2025 NHL Draft.

“First experience was great,” said Huberdeau of debuting with another NHL bunch other than the one he’s known since being plucked third overall in the 2011 draft. “We have a lot of good players on the team. So it doesn’t matter (who I play with).”

The 30-goal, 115-point superstar lined up on first day of camp with fellow winger Tyler Toffoli and centre Elias Lindholm for a trio that had been touted since the deal went down.

“I think Lindy and Toffoli are two good players,” reported Huberdeau. “I don’t think I’ve ever played with two righties, so it’s cool to have that. I’m looking forward to building good chemistry throughout camp.

But whether he sticks with Lindholm and Toffoli remains to be seen.

Ultimately, he’s just happy to be here and get camp in gear.

“It doesn’t matter (who my centreman is) — we’ve got Naz and (Mikael Backlund), too,” added Huberdeau, 29. “At the start, we’re going to try and build chemistry, for sure. Elias is such a good player … but we’ve got great centremen. These guys are just skilled players.”

One of them, Kadri, is a Stanley Cup champion.

So the native of London, Ont., will be counted on for his winning experience, which suits him just fine.

After all, he’d like to count another championship for himself — this time with his new team.

“Pretty focused, and pretty dialled in,” Kadri said. “Had my summer of fun and work — kinda balanced those two. Now leading into September and getting into October soon, it’s time to put your foot on the gas and just sharpen up your skills and get out of that summer mode and understand the start of the season is just around the corner.”

Ironically, that kicks off with a game against his old teammates, when the Flames host the defending Stanley Cup-champion Colorado Avalanche on Oct. 13 at the Dome (7:30 p.m.).

“It’s funny how that worked out, I guess,” said Kadri with a smile. “Hopefully, I can get my ring that night, too. That’d be nice — looking forward to that. But that’s a great team, and obviously, I have some great relationships over there, and I wish them nothing but the best.

“But when that puck drops, it’s go-time.”

Kadri, 31, was the prized free-agent piece brought in by GM Brad Treliving during what was a summer hailed by many to be award winning in the transaction department, especially after losing out in re-signing superstar Johnny Gaudreau.

“This idea of winning the summer is a load of crap, I think,” rebutted Treliving. “You try to win in the winter.

That begins now with main camp having kicked off, with a roster consisting of six goaltenders, 23 defencemen and 38 forwards for a total of 67 participants.

But just one guy there — new-guy Kadri — can boast about being a reigning champion.

“I feel great — a lot of positive energy,” said Kadri, after the first skate with his new team. “Everyone’s having fun with each other but getting down to business.

“This time of year, you can kind of feel the intensity start to build throughout practices. When you step on the ice, you’ve got to take care of business, first and foremost. That’s a great thing about our group. We understand those situations — how to be serious, and when to have fun.

“With new faces and new bodies, everyone’s just trying to get familiarized with each other to start camp and try to build early chemistry. But you’ve got to mix and match sometimes. I think there’s tons of combinations you can put together. Obviously, we’ve got a lot of great players, so it’ll be interesting to see.”

Fans likely won’t see a lot of Kadri in the coming days, however.

“We’re being really careful with Naz the first week or so,” said Flames head coach Darryl Sutter. “He played a lot of hockey (last year), so he won’t play a game for a while, so we’re just kinda moving him around. Want to make sure those PTO guys get a real good opportunity.”

MILANO ON A PTO

One of those PTO guys on Dome ice is forward Sonny Milano, who’s trying to earn a spot on the Flames after signing a professional tryout contract.

The native of Massapequa, N.Y., stood out — not only because of his coily hair-do but because he skated alongside Kadri and Cody Eakins, who’s likely a placeholder for the injured Andrew Mangiapane (described by GM Brad Treliving as being out “very short-term” with a “tweak”).

“It’s a good spot,” said the 26-year-old Milano, who describes himself as a playmaker with some finish around the net. “Just the opening in the top-nine (brought me to this try-out) — there’s a spot there for me to get. I think it’s a good opportunity.”

It comes as a surprise that he didn’t get a contract in the off-season after scoring 14 goals and 34 points in 66 games with the Anaheim Ducks last year.

“It was definitely a long off-season,” Milano said. “Obviously, I was hoping for a contract, and that’s where we are right now. I’ve just got to be positive.

“It is what it is, and I’m definitely excited for this opportunity.”

Sutter needs to see him grab hold of it fast, however.

“Better hurry,” Sutter said. “We play four games in seven days. Kid will have an opportunity to take advantage of it.”

Newcomer Weegar got the call to arms in Thursday’s veteran session alongside Chris Tanev to create a formidable top blueline pairing for the Flames.

The other ‘d’ partners out of the gate were Noah Hanifin with Rasmus Andersson and Nikita Zadorov with Nicolas Meloche — an interesting spot for the other fresh face on defence in that he’s getting a good look as a possible third-pairing guy. Rounding out the eight blueliners for the vet session were Juuso Valimaki and Michael Stone.

Oliver Kylington is away from camp indefinitely due to a personal matter.

“I think it’s more with those guys coming in, (there’s) more planning,” said Sutter of Weegar and Meloche. “For example, it’s finding the right partner, trying to find the right fit … That’s what important. Those guys coming in are good players. They’re coming off really good years. They’re coming off career years (so) it’s finding the right fit for them. If you play both sides, you’ve got to find the right partner for them.”

To round out the line combos up-front, it was Backland flanked by Dillon Dube and Blake Coleman, Milan Lucic and Brett Ritchie centred by Kevin Rooney, and youngsters Martin Pospisil and Adam Ruzicka with veteran winger Trevor Lewis. Ritchie and Ruzicka were re-signed by the club on Wednesday, while Dube created the most buzz of the forwards with his jump on Day 1.

Never mind the lines on the ice, the best line off-ice came courtesy of Huberdeau following his scrum with 20-some press members. “More media here than in Florida,” he said with a slick grin. Probably about five times the number, eh, Jonathan? … The club has eight pre-season games on the slate — four home and four away — during training camp, starting with a pair of split-squad games Sunday against the Vancouver Canucks. One goes at the Saddledome (6 p.m.), while the other is scheduled for Vancity’s Rogers Arena (5 p.m.) … They follow with more camp contests in the next week Tuesday against the host Seattle Kraken at Climate Pledge Arena (8 p.m.), Wednesday versus the visiting Edmonton Oilers at the Dome (7 p.m.) and next Friday against the host Oilers (7 p.m.). The Flames’ pre-season schedule then rounds out with tilts Oct. 3 vs. the visiting Kraken at the Dome (7 p.m.), Oct. 5 against the host Winnipeg Jets at MTS Centre (6 p.m.) and Oct. 7 in a rematch with the visiting Jets at the Dome (7 p.m.).