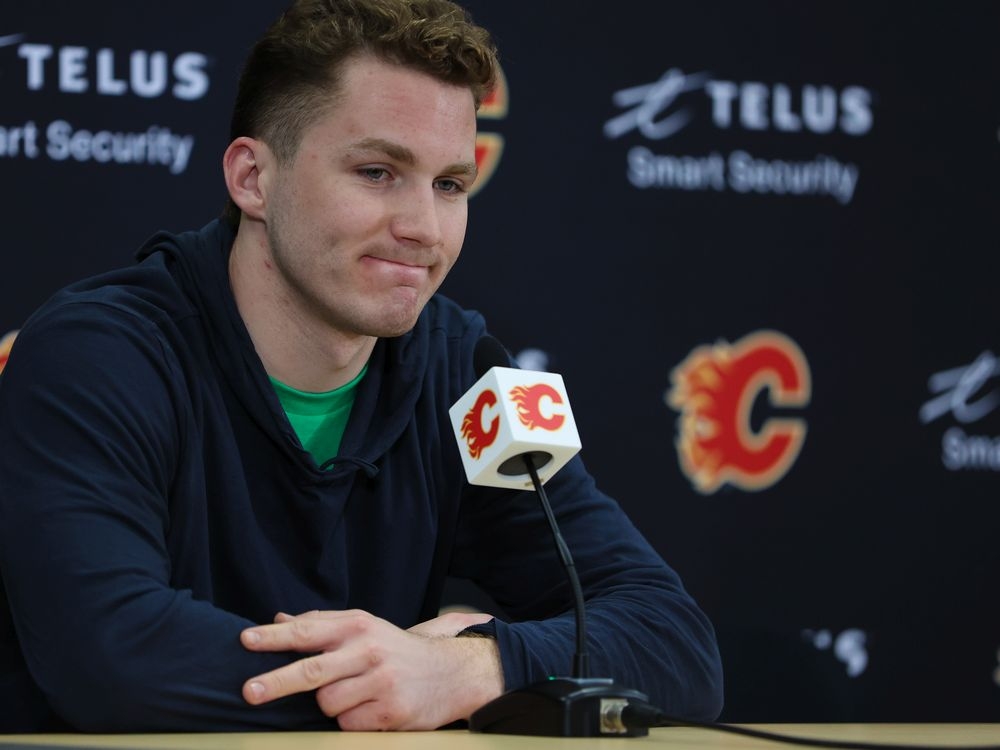 It was a simple question, and a definitive answer.

Is Matthew Tkachuk open to inking a long-term contract extension with the Calgary Flames?

Tkachuk has grown into one of the NHL’s top talents.

He notched 42 goals and 104 points this winter as part of a dynamite top line alongside Johnny Gaudreau and Elias Lindholm. He offers a unique skill set, as grating on opponents as he can be on mouthguards.

Tkachuk, who was the Flames’ highest-paid player this season with a cap-hit of US$9 million, is a pending restricted free agent. If he simply signs his one-year qualifying offer, he could be a UFA next summer.

On Saturday, as the Flames gathered for goodbyes at the Saddledome, the 24-year-old winger told reporters that he’d be happy to be hanging around Calgary for a long time.

“I kind of just fell in love with it here,” Tkachuk said after his annual exit meeting. “I think ever since the COVID shutdown, and I was talking about this the other day with family, the more you realize with people being locked up forever and now basically everybody you’re seeing out more than normal, how appreciative people are here of our team and how much passion they have for it,” Tkachuk said. “That’s something that we were lacking for those two years when we were pretty much shut down. I just love the people here. You know, it’s cool — not only cool to go places and have people come up and talk about the sport and talk about what you mean to them and everything, but just how happy the team makes them feel and how great they’ve made my life here.

“And I’m not just talking people with the team. Whether it’s trainers or coaches, management, players, just people in the city, people that live in my apartment or that I see on any given day …

“So yeah, to answer your question, I would be very open to that.”

Flames defenceman Chris Tanev, after wincing his way through a dislocated shoulder and torn labrum, insisted the most painful part is still to come.

“It’s tough — you’re going to start watching the next round soon,” Tanev said. “That won’t be fun, but that gives you motivation for next season.”

Before he can turn his focus to next season, the 32-year-old alternate captain will need time to recover.

He suffered that significant shoulder injury in Game 6 of a first-round showdown with the Dallas Stars, missing four in a row before returning for the final two dates against the Edmonton Oilers.

He’ll have surgery this week to repair the torn labrum, with a recovery timeline of four-to-six months. That’s after leading the team in ice time as they tried Thursday to stave off elimination.

“Everyone wants to play every game, especially in playoffs,” Tanev shrugged. “I’m not the first guy to play hurt and I’m not going to be the last. If I feel like I can get out there on the ice and try to help the team, that’s what I would like to do.”

Indeed, he wasn’t the only guy toughing it out for the Flames during their post-season push.

Nikita Zadorov cracked a couple of ribs in the opening round. Tkachuk did some damage to his hand in a fight. Andrew Mangiapane was bothered by a bad wrist, while both Oliver Kylington and Milan Lucic were dealing with shoulder issues.

“As I’m saying this, I’m probably missing guys,” said Flames general manager Brad Treliving as he listed the hurtin’ units. “When you factor in exhibition, you get to game 90-something games, so everybody is dealing with something.”

Like everyone else in Alberta, Flames forward Blake Coleman has watched the replay of his disallowed goal from Thursday over and over again.

If he’s come to any sort of conclusion, though, it’s that … well, people are going to find evidence that supports whatever way they feel about it.

Was there a “distinct kicking motion,” as the NHL ruled? Coleman acknowledges that it’s all in the eye of the beholder.

“I’ve seen it about 500 times now,” Coleman said. “It’s one of those plays I think is going to be talked about for a while. You can see it however you want to, I guess. I think my view on it is if it’s that controversial … it’s hard to say anything’s distinct about it.”

For those who have been living under a rock the last couple of days, a crease-crashing Coleman thought he had scored the go-ahead goal in the third period of Thursday’s Game 5 against the Oilers. It was his left skate that nudged the puck across the line.

Initially ruled a goal, it would have given the Flames a 5-4 lead to defend with around six minutes remaining in regulation, but upon video review it was called back. The Oilers prevailed in overtime, ending the series.

“You can definitely spin your argument whatever way you want. I think you could use video evidence to back up whichever side you feel is the right way. It’s a tough rule, there could always be a little grey in it,” Coleman said. “To me, I don’t think I was planting any soccer balls into the uprights there.”