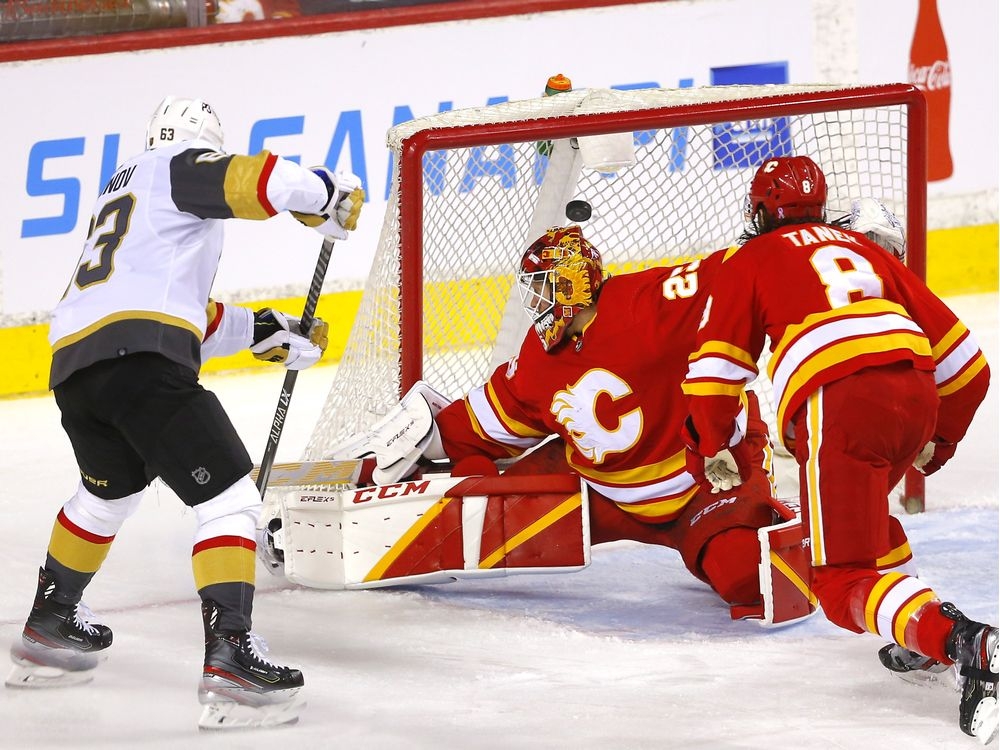 The objective was simple: win and you’re in.

Heck, just get a point and you’re in.

But there was just one immovable force standing in the way of the Calgary Flames clinching a spot in the 2021-22 post-season — the Vegas Golden Knights.

Sin City played spoiler on Thursday at Scotiabank Saddledome, ruining the Flames chance at punching their playoff ticket by pumping them with an embarrassing 6-1 loss. It also snapped a five-game winning streak for Calgary and dropped their all-time record against the Vegas nights to 4-10-0.

The Flames are still stuck at 99 points with a 45-20-9 record while the Golden Knights kept their own playoff hopes alive and improved their record to 41-29-5.

“I think it’s the hardest thing to do is make the playoffs, so it’s a big accomplishment,” acknowledged Flames forward Blake Coleman prior to Thursday’s game, referring to the possibility of getting the job done later that evening.

“There was a lot of uncertainty with this team coming into the year and to get where you want to go, that’s the first thing you need to do. It’s not lost on us what a big deal it is to make the playoffs.

“You know, there are 16 teams that don’t make the playoffs, so it’s a big step for us. It’s just a stepping stone that we need to get to where we want to go, but the sooner we can clinch that and feel good about our position, the better.”

Their next chance to do it will be on Saturday against the Arizona Coyotes (8 p.m., Sportsnet 960 The Fan, CBC, Sportsnet, Sportsnet One, CITY).

It takes a lot to bring down Chris Tanev.

So when the Flames defenceman was visibly shaken after absorbing a high elbow in the head from Golden Knights forward Keegan Kolesar with 4:30 remaining in the first period behind goalie Jacob Markstrom, you knew something was wrong.

Tanev rose to his feet and skated to the Flames’ bench, albeit wobbly, which was a good sign. And he did try to go back to the bench and sit down, ready for another shift.

Instead, Flames trainer Mike Gudmundson steered him to the dressing room in order to give him a proper evaluation.

The tough-as-nails defender was out for the second period.

It was obvious his teammates were offended by the hit. Nikita Zadorov tried to give Kolesar the business while Matthew Tkachuk was chirping. Milan Lucic tried to get the 25-year-old to drop the gloves at the beginning of the second period, but he refused and Lucic wound up with a holding penalty. At that point, the score was still 1-1.

The Flames did a decent job of killing the penalty, and were almost home free when a failed clearing off a blocked shot by Tanev wound up in the back of their net.

Evgenii Dadonov potted the loose puck past Markstrom, the second of five straight goals from the hosts.

“We came off a good road trip, 4-0, it’s not easy to do,” said Flames forward Mikael Backlund.

“The first two periods against Seattle were not pretty. We came out strong in the third and played really solid and we wanted to carry it over to this game and we didn’t.

“So, yeah, it’s frustrating. Not the way we wanted to play (Thursday).”

Earlier in the day, Sutter had mentioned their usage of personnel — and how many players they’ve needed to plug into action in order to get through the homestretch.

“We’ve just finished using eight defencemen and 13 forwards and two goalies, so just continue to do it,” Sutter said.

But the key part of his message was when it comes to their netminders, and particularly their No. 1.

“The way our schedule is, if we can set it up to give Markstrom time … We can get him four- and five-day breaks, so it sets up good that way,” Sutter said.
Giving him the hook two games in a row, however, was likely not the break he had in mind.

After being pulled after two periods and replaced by Dan Vladar in Tuesday’s eventual 5-3 win over the Flames, Markstrom was pulled again.

This time, it was midway through the second period after he allowed four goals on 17 shots.

Vladar fared no better as the team in front of him sputtered, letting in two goals on eight attempts.

“I don’t like doing that,” said Flames head coach Darryl Sutter on pulling his goalie. “I’ve said that always — I’m not a guy who pulls goalies. But I think tonight was different. The other night was trying to get some momentum out of our team because it was after the second period. But tonight, it was more I thought the players really let him down. I didn’t want to leave him in there.”

Sutter noted that this game had been the result of a gradual unravelling over the last couple of days — starting with the first two periods of Tuesday’s game against the Kraken, continuing in Wednesday’s practice, and culminating with Thursday’s game.

Some people won’t travel anywhere without bringing their golf clubs.

For others, like Guy Gaudreau — it’s his hockey equipment.

Johnny’s Dad went for a skate at Flames Community Arenas on Thursday afternoon, playing some shinny and showing off the kind of moves he taught to his son over the years. Kudos to the Flames’ online team who were on-hand to shoot video of Guy, cruising around the ice and, unsurprisingly, sniping a few goals just like Johnny.

That being said, the Flames could have used Guy on Thursday night to inject some life into their anemic offence …

“We’re in first place in our division for a reason so, we’ll be fine,” said Flames left-winger Matthew Tkachuk.

“I don’ think you turn the page completely. You realize what went wrong and then you drop it.”

The Flames scratched defencemen Connor Mackey and Michael Stone and forwards Brett Ritchie and Adam Ruzicka … D Juuso Valimaki was dispatched back to the Stockton Heat on Thursday … D Oliver Kylington returned to the lineup after missing five games with an upper-body injury … Dillon Dube scored Calgary’s only goal on a first-period powerplay.