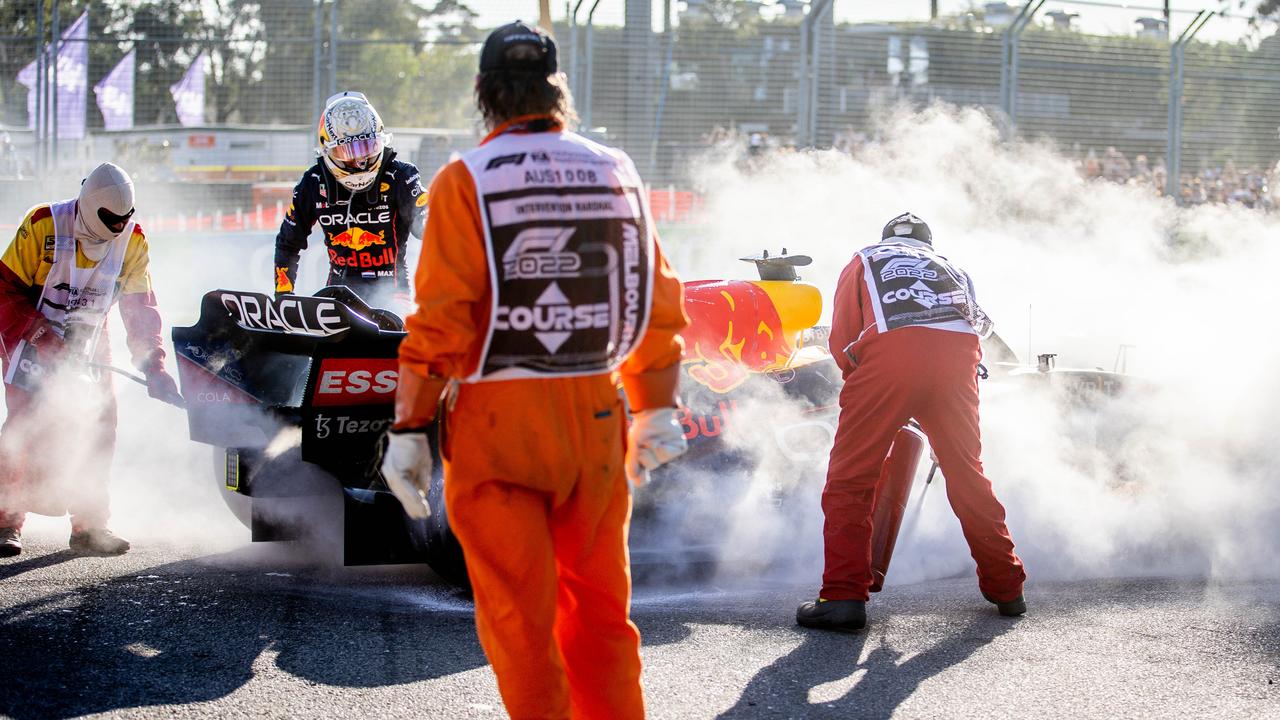 Max Verstappen said he could smell something weird before marshalls ran in with fire extinguishers as a Ferrari star blew everyone away.

Charles Leclerc has landed a hammer blow on Max Verstappen on a day when the reigning champion’s Red Bull caught fire.

It was a disaster for Red Bull as Leclerc led from start to finish in a dominant performance that will send a shudder across the pit lane.

It was also a day to celebrate for Aussie Daniel Ricciardo and McLaren as he finished in P6.

His teammate Lando Norris finished fifth as the team scored its highest points haul of the year so far.

It was Ricciardo’s best finish at his home race since 2018.

Leclerc now has a 34-point lead in the championship ahead of Mercedes’ George Russell. After a second DNF, Verstappen sits sixth on the world championship leaderboard, 46-points behind Leclerc.

The world championship leader from Monaco started from pole, held his position at the first corner and never looked back, scorching round the 58-lap Albert Park circuit to take the chequered flag by a massive 20.5 seconds.

Verstappen, meanwhile, looked a dejected figure as he spoke to the world’s media at the end of the race.

“We’re already miles behind. I don’t want to worry about the championship,” he told Sky Sports.

“These sort of things, if you want to fight for a world title, cannot happen.”

He made a stunning comment that he knew in the middle of the race that he had no hope of competing with Leclerc.

“I knew I could not fight Charles,” he said.

At the moment, heading into the fourth race of the year at the Emilia Romagna Grand Prix in Italy on April 24, nobody seems to be able to fight the Ferrari driver.

Max Verstappen has retired from the Aussie Grand Prix after his Red Bull caught fire on lap 39.

Verstappen was eight seconds behind Charles Leclerc when he pulled to the side of the track and hoped out before gesturing for race marshalls to extinguish a fire coming from his car.

It left Ferrari’s Leclerc with a lead of more than 12 seconds over Sergio Perez.

Verstappen said on team radio he could “smell some weird fluid” before the team told him to switch the engine off.

“Everything has s**t itself,” he added.

Daniel Ricciardo has narrowly avoided disaster after rejoining the race track from the pits with an aggressive block on two rival drivers.

Ricciardo pitted one lap after teammate Lando Norris and rejoined the race directly behind — only to be immediately attacked by Alex Albon and Lance Stroll.

Albon had to hit the brakes hard to avoid running into the back of the McLaren driver.

Immediately after the action, Sebastian Vettel crashed into the walls triggering a safety car on lap 23.

Vettel skidded across the track after hitting a bump and losing his rear wheels.

Verstappen pitted on Lap 20 and re-joined the race in P7.

Verstappen put on hard tyres and will hope that the tyre can carry him all the way to the finish line.

Lewis Hamilton exploded off the line at the start of the Aussie Grand Prix to climb up to third after a few corners.

Ricciardo held his place at 7th on the timesheets. Carlos Sainz had a disaster and dropped five places before even completing a lap.

Sainz’s nightmare got even worse on the second lap when he skidded into the wall in a high speed crash.

He went into a chicane too hot after completing an overtake, but missed the turn and went spinning across the grass into the tyres.

Alex Albon was dropped to the back of the grid for the Australian Grand Prix because there was not enough fuel in his Williams car to provide a test sample after Saturday qualifying, officials said.

Albon stopped out on track after dropping out of Q1 and was later unable to provide the required one-litre fuel sample to the FIA officials.

“Albon finished with the 16th best time in the first qualifying run, too slow to progress to the last two sessions.

He was already facing a three-place grid penalty for his crash with Lance Stroll in the previous race in Saudi Arabia.

That meant the decision to scrub out the time he recorded effectively cost him just one grid place.

The penalty also lifted Stroll out of last place on the grid.

After qualifying last, the Canadian was then handed a three-place penalty for colliding with the other Williams, driven by Nicholas Latifi, on Saturday.