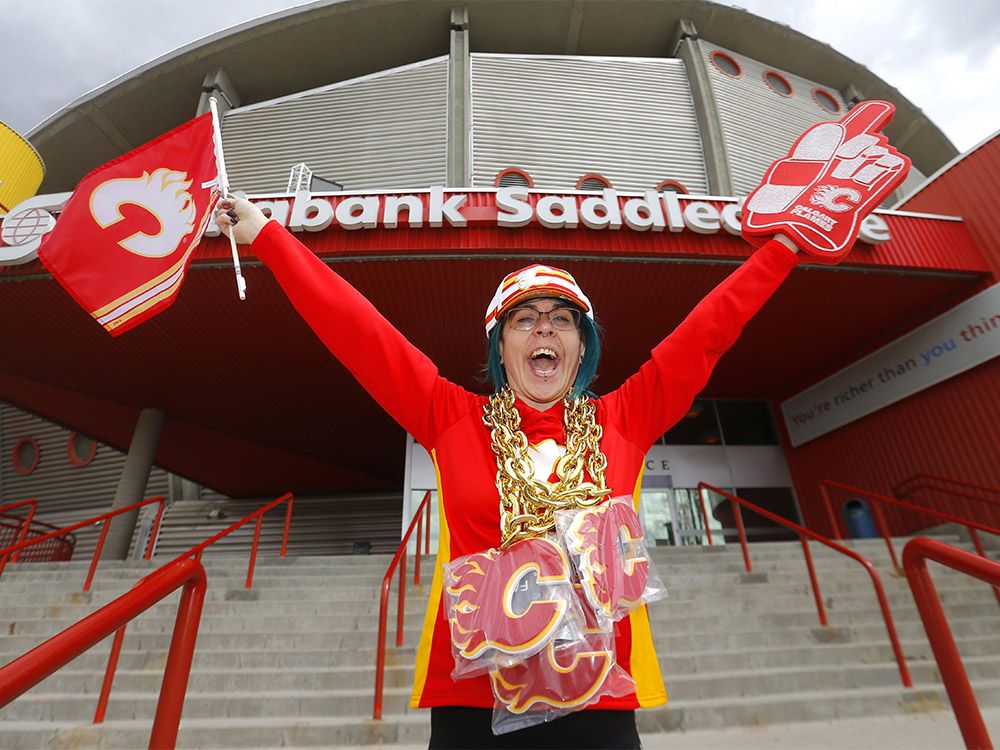 Calgary Flames fans can expect a packed house inside and outside the ‘Dome as the team takes the ice against the Dallas Stars for Game 1 of the first round of the Stanley Cup Playoffs on Tuesday evening.

With butts expected to fill most, if not all of the Scotiabank Saddledome’s close to 20,000 seats, fans are ready to watch their team in playoff action in person for the first time since 2019. Ticketmaster showed the building nearly sold out as of Monday afternoon, with most available tickets only being up for grabs through resale.

But for those who aren’t able to obtain the high-demand tickets before the 8 p.m. puck drop on Tuesday, there’s room for another 5,000 people in the free Red Lot viewing party just outside the Flames’ stomping grounds at Stampede Park.

HEY. @NHLFlames fans. RedLot update. More items added, lots more to come.BIG #Budweiser light looks amazing, hope the boys light it up all night. The behind the scenes #Saddledome crews are a hard at work this week. Looking after 2 BIG party places is hard work. See you all Soon. pic.twitter.com/3DPog5hHjr

For downtown bars and pubs — especially those along the famed Red Mile on 17th Avenue S.W. — it’s going to be all hands on deck Tuesday night and all Flames games throughout the playoffs, for an eagerly anticipated post-game rush filled with red jerseys.

“The phone has been ringing steadily,” said Harry Dimitriadis, owner of Jamesons Pub on 17th. The bar is taking reservations to 50 per cent capacity for the first round, with the rest of the expected full house to be filled by walk-ins.

“It’s great to see the energy building and the fact that we have such a good team. There’s the feeling there that this team could go really far, possibly go all the way — so that really gets people excited.”

Dimitriadis said the last time there was a notable run that truly reverberated with the Calgary sports crowd was the Toronto Raptors NBA Championship in 2019. While obviously not a Calgary team, the Raptors brought out fans nationwide during their historic run, filling bars, restaurants and watch parties around the country. Dimitriadis is looking forward to welcoming that “local pride” back to Jamesons, this time with the added benefit of most people actually knowing and following the sport.

“I think 80 per cent of the room had never watched a basketball game before,” he said.

“It’s the local pride, right? So I think with hockey obviously being our big sport . . . people are really rallying behind that.

Fans are also turning up the heat when it comes to gearing up for the hopefully lengthy playoff run. Brent Gibbs, the Flames’ retail director, said jersey and merch sales have seen an upward trend throughout the season — alongside the team’s success. With the playoffs now here, more fans are looking to get their hands on items to help them showcase their support.

“We expect a big crowd will be set up early at our Red Lot . . .  and we’re ready to go; we have lots of stock and we expect the fans to continue to buy jerseys and other merchandise to support our team,” he said.

Flames shops will be offering several commemorative 2022 playoffs themed items, including a T-shirt emblazoned with the team’s “Fire It Up” playoff slogan, some Pacific Division Champs merchandise and collectible playoff mini-sticks and pucks.

But as far as top sellers go, the answer is relatively obvious.

“Our top line has had a successful year and those have been the most popular (jerseys), probably for sure,” said Gibbs, of fans pining after sweaters bearing the names of the three players that comprise what is arguably the NHL’s best line — Johnny Gaudreau, Matthew Tkachuk and Elias Lindholm — a trio that put up a combined 124 goals and 301 points over the regular season.

Needless to say, with numbers like that — and a Pacific Division-topping 50-win 2021-22 campaign — expectations are high for the best-of-seven series against the first wild-card Stars — a team the Flames went 2-0-1 against this year.

Meanwhile, the City of Calgary is urging fans — either on the Red Mile or at home — to celebrate safely throughout the Flames playoff run.

In partnership with the Calgary Police Service, Alberta Health Services, Alberta Gaming, Liquor and Cannabis, and community and business organizations in the 17th Avenue area, the city announced several safety measures for the first round on Monday.

No road closures are planned but parking bans will be in effect along 17th Avenue S.W. between 2 Street S.W. and 8 Street S.W. starting at 7 p.m. during home playoff games.

“We encourage all Calgarians to stay off the road in order to stay safe and allow traffic to move. This will help facilitate the flow of traffic and enhance safety,” the city said in a news release.

While the city recently lifted a court injunction on gatherings, designed to crack down on protests in the Beltline over COVID-19 restrictions, there will be an increased police presence on the Red Mile on home game nights. The city reminded residents that alcohol is only permitted in licensed bars and pubs, not on the street, and public cannabis consumption is not allowed as per city bylaws.

Are you a business owner along the Red Mile or the Saddledome? Myself & ASgt Glover will be working as Business Liaison Officers for this year’s Red Mile. We can be reached at businessliaisonofficer@calgarypolice.ca for any Red Mile policing-related inquiries. #redmile2022 pic.twitter.com/k1Vhg2ANY5

The city is also bumping up transit service on home game nights to support demand and help fans get home safely after their post-game celebrations.

“We remind anyone taking Calgary Transit that provincial rules still require you to wear face coverings while riding with us,” said the city.

“If you are planning to drink, please use Calgary Transit or the services of a rideshare, taxi or limo — always remember to check the identity of both the driver and their vehicle before you get in.”

The city plans to revisit the measures for future playoff rounds, if necessary.