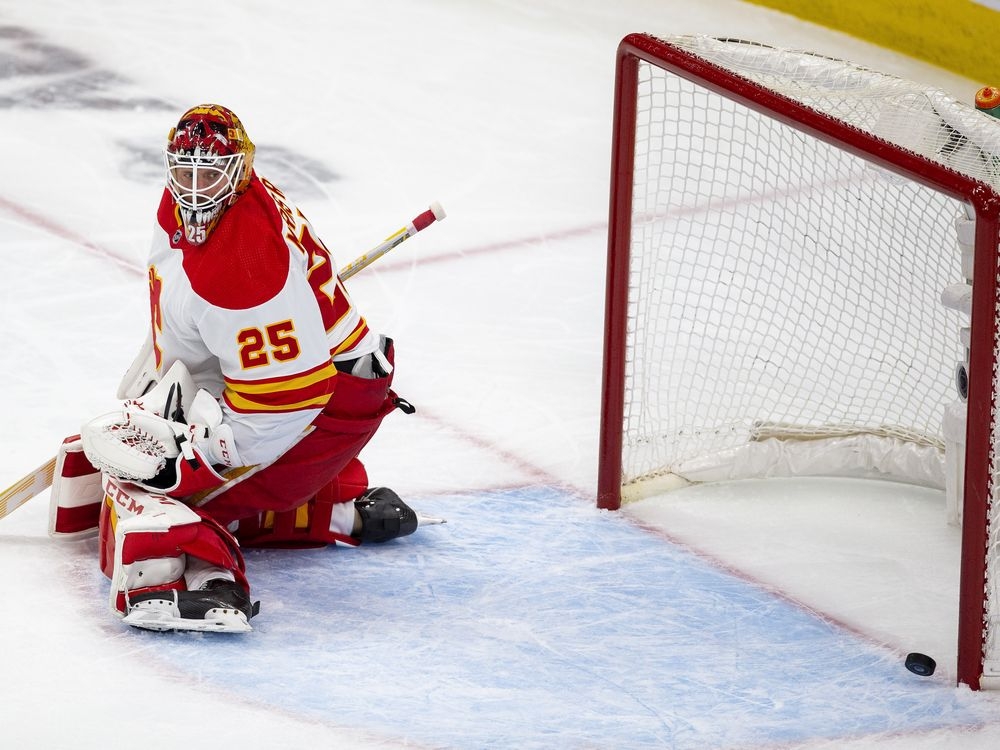 Connor McDavid, Leon Draisaitl, Evander Kane and the rest of the Edmonton Oilers will be on the tube Tuesday for the opening game of the NHL’s Western Conference final.

So a channel-surfing Jacob Markstrom might want to steer clear of Sportsnet.

The Calgary Flames’ star puck-stopper will likely sleep better if he watches The Shining or some other horror flick instead. Then again, after being shelled for a grand total of 24 goals in a second-round series against the Oilers, it could be impossible to avoid nightmares about that sharpshooting crew in copper and blue.

“I don’t have an explanation. Obviously, if I had it, I would have changed it after Game 1,” Markstrom said after the Flames’ exit meetings and locker clean-outs. “I think I need some more time to kind of sit on it and go back and re-watch it and study it. But whatever happened, it’s happened, and you have to move on and you have to learn from it.”

One of the storylines in the lead-up to the provincial playoff showdown was that Markstrom had picked his side in the Battle of Alberta. As a coveted free agent in 2020, he said no thanks to an offer from Edmonton and chose to sign at the Saddledome instead.

The Oilers, ever since, have picked him apart.

Even the top twine-minders of all-time have an opposing team that seems to have their number — take a peek at Patrick Roy’s career splits against the Philadelphia Flyers or Martin Brodeur’s history versus the Vancouver Canucks — but if you’re the go-to guy in Calgary’s crease, you’d rather it be absolutely anybody other than the hated rivals from up the QEII Highway.

During that five-game ouster from the Oilers, Markstrom posted a cringe-worthy 5.12 goals-against average and .852 save percentage, not the sort of stat-line that you expect from a Vezina Trophy finalist.

There were whispers the 32-year-old might have been bothered by some sort of nagging injury but he wasn’t going there, saying “I think everybody is hurt on every team” and insisting he “felt good and felt comfortable.”

Markstrom had joked after mid-season trades for Tyler Toffoli and Calle Jarnkrok that he was thrilled to be on the same side as two dudes who always seemed to put pucks past him. Well, Brad Treliving might need to place a call about acquiring Zach Hyman. He scored in every game in the series.

“Listen, I would go to war with that goaltender any day of the week,” said Treliving, who told reporters during Saturday’s end-of-season presser that he barely recognized his typically tight-checking team during the second-round set against the Oilers. “(Markstrom) would be the first one to tell you he didn’t get to his game, either. But let’s go back and there was a lot of things that happened before the puck went in the net — before it got to Jacob — that didn’t go right. In that series, we didn’t look like ourselves. The chances that we were giving up, didn’t look like ourselves.

“Yeah, you need good goaltending. You just do. But there were a lot of things that went wrong. The final act is the play at the net, but back up the tape 40 seconds — there were some things that happened before it got to the net. That’s part of playing the position is you always get the glory or get the scorn if it doesn’t go right. But to me, there was a lot of stuff that we could have done differently and better before it got to Jacob.

“He probably sat up here and said he could be better, but I put it on all of us. Myself, everybody, we weren’t good enough to be advancing.”

There are plenty of off-season questions for the Flames, but goaltending isn’t one of them.

As bench boss Darryl Sutter reminded when asked about Markstrom just minutes after his squad was eliminated: “He had a hell of a year. He’s one of our captains, one of our leaders. The team won 55 games and how many did he win? Most of ’em.”

“Marky has been amazing for us, the backbone of our team all year,” echoed alternate captain Chris Tanev, who missed the first three games of the Battle of Alberta — an awful time to be without your best shutdown defenceman — and will have surgery on his injured shoulder this week. “Nothing is on him. We needed to be better in front of him and reduce the scoring chances that a couple of really good players got.

“He’s the backbone of our team. He’s probably our best player, and he will continue to be moving forward.”

Markstrom wrapped the 2021-22 campaign with career-bests in every major stat category — 37 victories, a 2.22 goals-against average, .922 save percentage and a league-leading nine shutouts. He outduelled Jake Oettinger in the first round and, in the midst of that seven-game nail-biter against the Dallas Stars, learned that he is up for the Vezina Trophy for the first time in his career.

A lot to be proud of, although it will be a while before the stalwart Swede can look at the bright side.

“I think everybody that’s having an exit meeting like this and not in the locker-room full of cheering and drinks and celebrating, they’re not thinking of it as a success,” Markstrom said during the Flames’ farewells. “If you look from the previous year, I think our group and myself, we took some steps in the right direction. But I think it’s a sour taste and people are going to be hungry to come back next year.”

ICE CHIPS: The last time an American Hockey League netminder posted three shutouts in a playoff series, Dustin Wolf wasn’t even born yet. Now the Flames’ prized puck-stopping prospect, Wolf just joined a very exclusive club. The 21-year-old delivered three donuts in a four-game stretch to backstop the Stockton Heat to the AHL’s Western Conference final. Wolf made 40 saves in Sunday’s 1-0 clincher against the Colorado Eagles, becoming just the third masked man in league lore — the others were in 2000 and way back in 1947 — with three blankings of the same post-season opponent.