European Union leaders have reached a compromise to impose a partial oil embargo on Russia at a summit focused on helping Ukraine with a long-delayed package of sanctions that was blocked by Hungary.

The watered-down embargo agreed to on Monday covers only Russian oil brought in by sea, allowing a temporary exemption for imports delivered by pipeline.

EU Council President Charles Michel said on Twitter the agreement covers more than two-thirds of oil imports from Russia, “cutting a huge source of financing for its war machine. Maximum pressure on Russia to end the war.”

The EU had already imposed five previous rounds of sanctions on Russia over its war. It has targeted more than 1,000 people individually, including Russian President Vladimir Putin and top government officials as well as pro-Kremlin oligarchs, banks, the coal sector and more.

But the sixth package of measures announced May 4 had been held up by concerns over oil supplies.

Hungarian Prime minister Viktor Orban had made clear he could support the new sanctions only if his country’s oil supply security was guaranteed. The landlocked country gets more than 60 percent of its oil from Russia and depends on crude that comes through the Soviet-era Druzhba pipeline.

Ursula Von der Leyen, the head of the EU’s executive branch, had played down the chances of a breakthrough at the summit. But leaders reached a compromise after Ukrainian President Volodymyr Zelenskyy urged them to end “internal arguments that only prompt Russia to put more and more pressure on the whole of Europe.”

Von der Leyen said the punitive move will “effectively cut around 90 percent of oil imports from Russia to the EU by the end of the year.”

The EU gets about 40 percent of its natural gas and 25 percent of its oil from Russia, and divisions over the issue exposed the limits of the 27-nation trading bloc’s ambitions.

In his 10-minute video address, Zelenskyy told leaders to end “internal arguments that only prompt Russia to put more and more pressure on the whole of Europe.”

He said the sanctions package must “be agreed on, it needs to be effective, including (on) oil,” so that Moscow “feels the price for what it is doing against Ukraine” and the rest of Europe. Only then, Zelenskyy said, will Russia be forced to “start seeking peace.”

It was not the first time he had demanded that the EU target Russia’s lucrative energy sector and deprive Moscow of billions of dollars each day in supply payments.

But Hungary, leading a group of EU countries including Slovakia, the Czech Republic and Bulgaria, relies heavily on Russia for energy and can’t afford to turn off the pumps. In addition to its need for Russian oil, Hungary gets 85 percent of its natural gas from Russia.

Orban had been adamant on arriving at the two-day summit that a deal was not in sight, stressing that Hungary need its energy supply secured.

French officials said the decision by Germany and Poland to phase out Russian oil by the end of the year and to forgo oil from the Druzhba pipeline will help reach the 90 percent threshold announced by von der Leyen.

The summit will also focus on continued EU financial support to Ukraine — probably the endorsement of a 9 billion-Euro (A$13.5 billion) tranche of assistance — and on military help and war crimes investigations.

The issue of food security will be on the table Tuesday, with the leaders set to encourage their governments to speed up work on “solidarity lanes” to help Ukraine export grain and other produce. 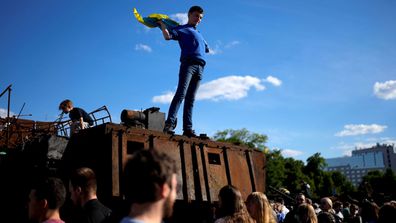 Some protesters gathered outside EU buildings Monday before the summit, holding signs like “No to Russian oil and gas.”