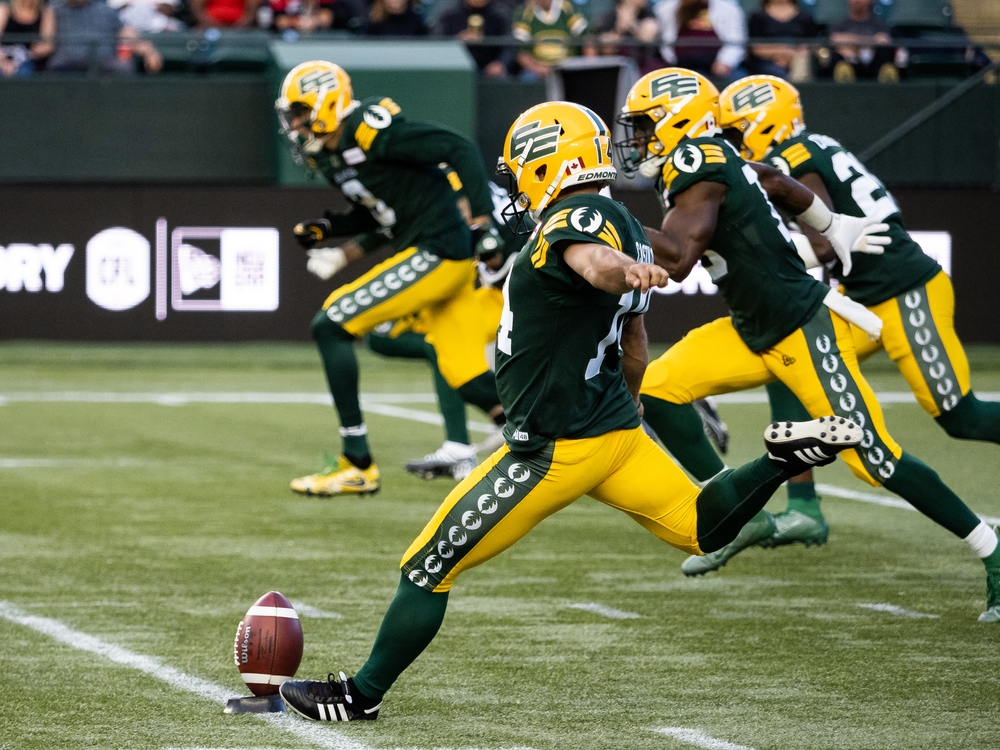 Sergio Castillo will be aiming his kicking leg at some familiar faces when he kicks off the next Edmonton Elks game at Commonwealth Stadium on Friday.

The former Winnipeg Blue Bombers placekicker is facing his old teammates for the first time since winning the Grey Cup with them last year.

“They’ve got a good group of guys that’s been there for a while. When a team has a core that’s been there for a while, you can build around those guys,” said the 31-year-old native of La Joya, Texas, who began his professional career in 2015 with Winnipeg. “So, I think that’s why they’ve been able to be so dominant over the past two, three years.”

After joining the Elks in free agency in February, Castillo missed out on a pre-season game where Edmonton won 30-20 at IG Field in May due to a death in the family.

“No, unfortunately, I had to go back home with the death of my father-in-law,” Castillo said. “It will be good to see the guys again. I still keep in touch with quite a bit of the guys: Johnny Augustine, (Mike) Benson, Lieggs (Marc Liegghio).

“We’ll probably meet up tomorrow and go eat some Mexican food and stuff like that. Hopefully they get the runs.”

All kidding aside, it didn’t take Castillo long to find a good spot for Mexican food here in Edmonton.

“Yeah, it’s called Maria Northern Mexican Cuisine. I’m there at least twice a week,” he said, blowing his fingers to the sky with a kiss of approval. “It’s like at my grandma’s house, fresh homemade tortillas, salsa.

“It’s my first time actually in my seven years in Canada that I found a legit Mexican spot. And there’s probably other ones I just haven’t found, but in all the cities I’ve been — Ottawa, Winnipeg, Vancouver — this is, by far, my favourite one and I just feel like I’m at home every time. When I feel homesick, I go there.”

It turns out, all it took was coming to the northernmost professional football city on the continent to find it.

“Right? Exactly,” Castillo said. “But that’s the spot to go.”

The Bombers are coming into Commonwealth Stadium on Friday (7 p.m., TSN, ESPN+, 630 CHED) with the league’s lone perfect record in tow after starting out the season 6-0.

But ending his old team’s streak isn’t nearly as important as stopping one of the Elks’ own.

“For us, it would be big to add another win, especially at home,” Castillo said of a losing streak inside Commonwealth Stadium that has grown to 10 games in a row. “I know there were no wins here last year at home, so that’s something that we can bring to the city of Edmonton, to our fans.

“It would be big for us in that aspect. Obviously, if we win it would be their first loss. We are thinking more about us, which is to build something big here.”

While his 15 field goals on the season is tied for third most in the CFL, his 78.9 per cent accuracy ranks just seventh out of the nine kickers with multiple attempts on the year, so far, and he has one miss in three attempts in each of his last three games.

To be fair, head coach Chris Jones has called him out for his fair share from beyond 50 yards.

“That’s the comfort that we have,” Castillo said. “Just growing over the years and enjoying the game more than anything.”

With all the shakeups on the Elks roster over the season, due to transactions and injuries, Castillo is getting used to a new field-goal tandem in front of him made up of long-snapper David Beard and holder Scott Hutter.

“The good thing is Hutter and Beard, they’ve done it before, and when Hutter didn’t hold for the last five weeks, he was still doing it as a backup, right? So, he was still molding his craft more than anything,” Castillo said. “So, we’re getting a good comfort level doing our drills that we have to do, so it’s definitely been growing.”

And having a hulking, 300-plus-pound centre long-snapping the ball has its advantages too.

“He’s solid. He’s good,” Castillo said, adding it takes defenders longer to run around him than a typical long-snapper’s body. “You don’t have to worry about anyone coming in.

“That’s why he gets paid the big bucks.”