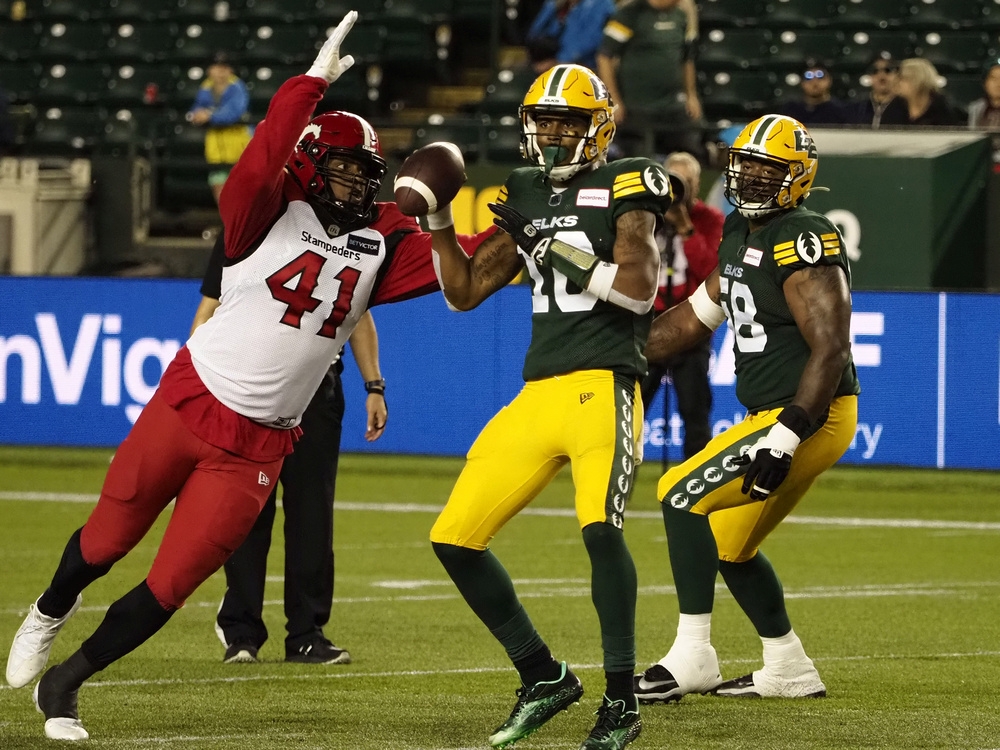 Three new names will take their place on the Edmonton Elks Wall of Honour surrounding the field at Commonwealth Stadium.

Running back Jim Germany and defensive backs Joe Hollimon and Ed Jones were key pieces of the club’s five-in-a-row Grey Cup championships from 1978-82, and will have their placards unveiled during halftime of a game against the Saskatchewan Roughriders on Aug. 13.

The last player to have his name go up on the wall was quarterback Ricky Ray in 2019, as the total number of inductees now climbs to 41.

Hollimon holds the club record for most interception returns for a touchdown, with seven, most kick returns in a game, with eight, and most kick-return yards, with 239.

“I was just in Montreal and got to recognize the team that I was fortunate to be on in ’02,” Elks head coach Chris Jones said of the 2002 Montreal Alouettes squad that won the Grey Cup in his first season as a Canadian Football League coach. “These guys, they sacrifice a whole lot to be up here and play. Some of them are Canadian, some of them are American but all of them, generally, are probably away from home. Not very many of them are fortunate to be from there and they get nominated for these things.

“So, it’s a huge honour and I think as an organization, as a community, to go back and look back in time and honour somebody that’s been a really good player, I think it’s the ultimate respect.”

Having only had him on the practice roster since July 10 isn’t stopping the Elks from suiting up Keisean Lucier-South against the first-place Winnipeg Blue Bombers on Friday (7 p.m., TSN, ESPN+, 630 CHED).

“He’s a good player. He was a five-star guy out of high school that I’ve been watching and following for a long time,” Jones said of the six-foot-four, 235-pound UCLA product. “He led UCLA in sacks, I think it was, as a junior and he’s a very versatile guy.

“He can play some standup outside linebacker. Very athletic. I look forward to being able to see what he brings to our football team. He can line up at a bunch of different positions, he’s extremely smart, extremely dependable.”

The release of starting cornerback Jalen Collins this week after 12 sacks, a forced fumble and a fumble recovery for the game-winning touchdown against the Hamilton Tiger-Cats three weeks ago, means yet another new face in the Elks starting lineup this week.

And it looks like — in true Jones fashion — wide receiver Raphael Leonard could be getting the call to fill that space.

“He’s done a real nice job,” Jones said of the six-foot-two, 190-pound Southern Illinois product who attended training camp with the NFL’s Jacksonville Jaguars in 2019 and the B.C. Lions in 2020, but has yet to play a pro season. “It’s something that we’ve been toying with for quite some time, he’s got just all kinds of talent.

“Now it’s just a matter of him learning the position.”

Elks receiver Kai Locksley, who also lines up behind centre to take short-yardage snaps for the hard-earned yards, was hurt in Thursday’s win in Montreal, as well as having injured his shoulder a week earlier in a loss to the Calgary Stampeders. Apparently, his ability to come back from the first one only to go down with an altogether different injury this time around drew some razzing from one of the club’s alumni players the next day.

….just jokes from me tho- stuff Kai was playing thru would have me reaching for the Geritol! Much respect to @LOCKSnLOADED_3 for stepping up his game and becoming #BONE personified! He’s exactly what this franchise needs right now to get to the next level! Respect! @GoElks

“Cracked me up how many times Kai Locksley would go down during the game with a seemingly season-ending injury only to see him heroically sprinting back into the game from the sidelines moments later,” former Edmonton defensive lineman Jed Roberts posted on Twitter. “I think that wayyy deep down in Locksley’s soul he may really be a kicker.”

On Sunday, Roberts clarified his stance.

“Just jokes from me though. Stuff Kai was playing through would have me reaching for the Geritol! Much respect to (Locksley) for stepping up his game and becoming BONE personified!” he said, referring to the locker-room saying, Brotherhood of Nasty Elks. “He’s exactly what this franchise needs right now to get to the next level! Respect!”