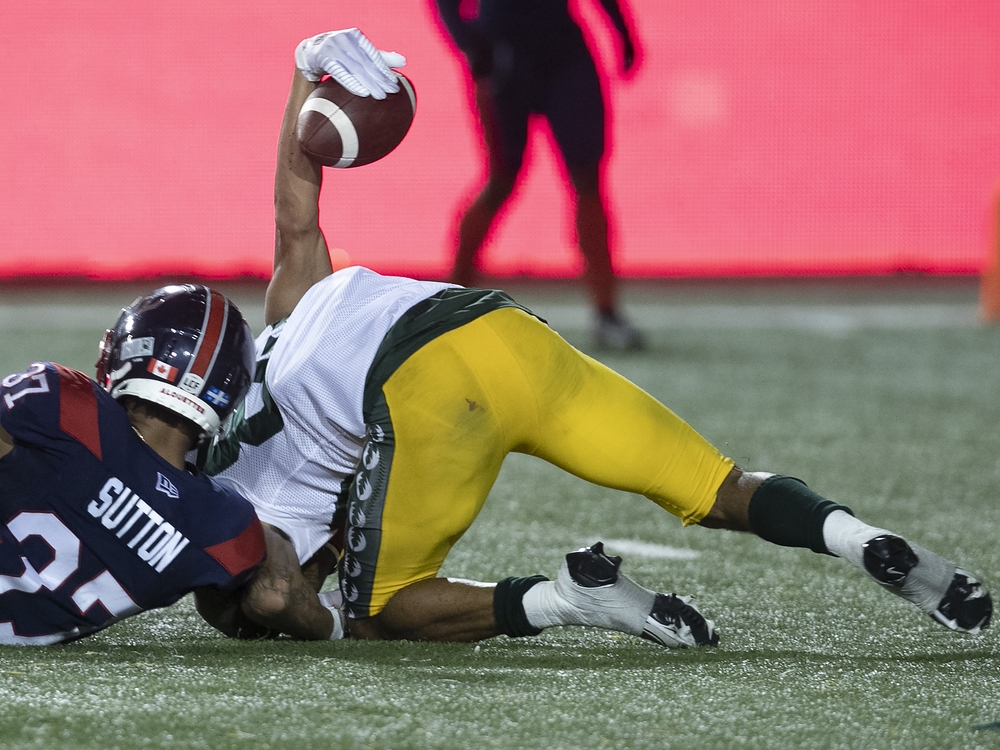 It wasn’t just the 92 receiving yards on 13 catches Kenny Lawler earned on the way to scoring the game-winning touchdown that saw him named one of the Canadian Football League’s top performers of the week.

You have to add the 108 penalty yards on the three defensive pass interference flags the Edmonton Elks receiver drew in what turned into a 32-31 comeback win over the Montreal Alouettes.

And you can bet the 200 yards in combination were the biggest single factor in Edmonton pulling out the one-point victory.

“That’s dope,” Lawler said of the weekly honour. “I wish I could have the receiving yards instead of the P.I. yards, but we were able to find success with them, so we were able to flip the field.

“And I’ll take anything that helps our team win and get closer to the end zone.”

All three penalties came against Alouettes defensive back Wesley Sutton, whose only choice in the whole matter appeared to be getting flagged or watching Lawler score touchdowns.

“I’ve never seen that many yards, I’ve never gotten that many penalty calls,” said Lawler, the only player in the league to reach quadruple digits in receiving yards last year on the way to winning back-to-back Grey Cups with the Winnipeg Blue Bombers. “It’s kind of crazy, but if the ball’s in the air it’s either got to be a P.I. or a catch, and it was a P.I.

“We’ll take it any way we can get it. When the defender is kind of scared out of his pants and he decides to P.I., it benefits us and I can’t complain at all.”

The Elks overcame a 19-point deficit to improve to 2-4 on the year, having won two of their last three following an 0-3 start to the season.

“And that’s what we want to keep doing.”

And through it all, Lawler has had three different starting quarterbacks and a total of four throw the ball at him in games. It can be a bit much.

“Kind of, but that’s what practice is for. We’ve had multiple quarterbacks throwing us the ball,” said Lawler, who has seen a total of nine make their way to the squad, so far, since mini-camp opened this year. “And that’s where we find our rhythm. We try to carry everything we’ve built in practice onto the game.

“I feel we all have a certain chemistry and, right now, Taylor (Cornelius) is up and he’s doing a great job.”

Lawler will be looking for more of the same from his QB this week, especially considering the league’s top receiver from a season ago is facing his former squad.

“I know Winnipeg, I played there three years and I know a lot of those guys personally,” Lawler said. “I know what those guys are being taught.

“Now everything’s at stake. Winnipeg, they want to go 1-0 each week and they’ve been doing that each week.

“They play a tough game, a hard-fought game. They’re going to smack us in our mouth every play, but we’ve got to match that energy. When they hit us, we’ve got to hit them back. That’s what’s going to keep us in the game, if we’re playing timid, playing scared, that’s going to cause us to start making errors and start falling behind on the scoreboard.”

Just like the rest of the league is beginning to fall behind in the standings.

“I played with those guys, they’ve got all-stars all on their defence, all on their offence. It’s just a great team, they built a dynasty over there,” Lawler said. “But we’ve got great players too.

“I wouldn’t want to trade this opportunity in for anything. We’re going to see who are fighters out there and, man, I just can’t wait.”

Of course, there are challenges out there much more easily achieved than taking on the two-time defending champs who hold the league’s lone undefeated record so far this year.