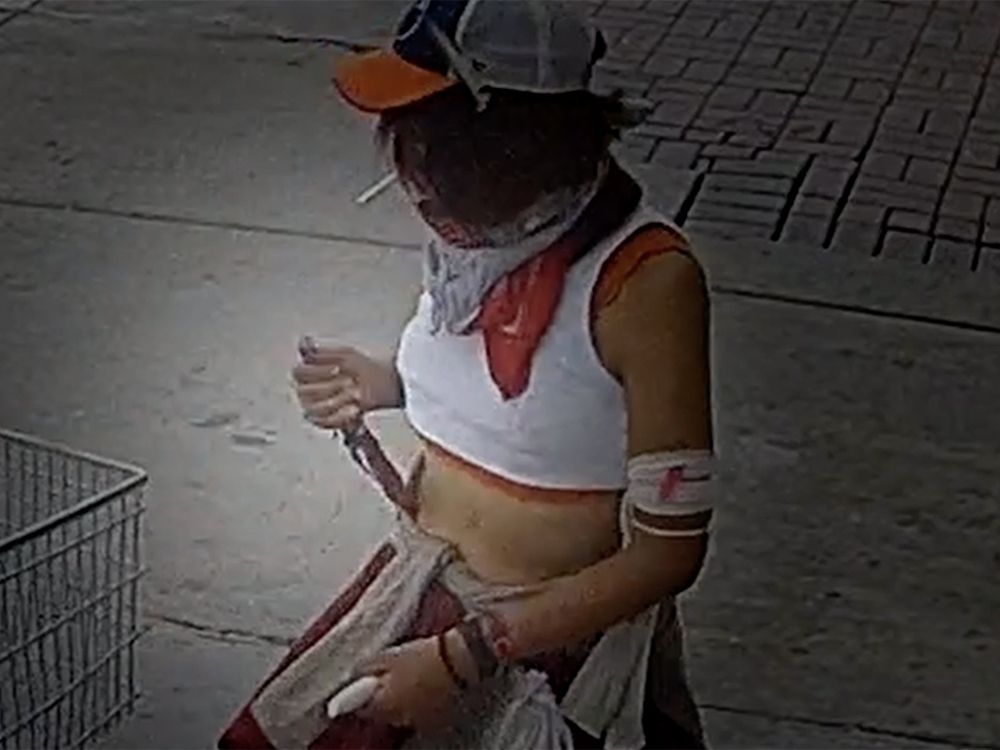 Edmonton police on Thursday, in response to a video showing an officer shoving a woman to the ground, released CCTV footage that confirms she was carrying a knife.

During an Edmonton Police Commission meeting Thursday, acting chief Devin Laforce said the officer’s response was reasonable given the full circumstances of the event.

“Use of force is an unpleasant reality of policing, but one required to be in control of the situation and prevent further incident to the individual, the public and the officer involved,” Laforce said.

The two-minute and 32-second video shared by Edmonton police is a number of angles of CCTV footage spliced together showing a woman in the area of 100 Street and 106 Avenue on Sept 15. She is seen taking a knife out of her waistband while interacting with another individual in the street.

About 90 seconds in, an Edmonton police vehicle arrives at the scene. The woman walks towards the vehicle and away from the other individual as the officer gets out. Seconds after exiting the vehicle, he is seen pushing the woman to the ground and arresting her.

Video of the woman being pushed to the ground made the rounds on social media last week, prompting a protest outside Edmonton police headquarters demanding the release of the footage. Police previously said the woman was not injured and not charged.

“Unfortunately, the reality is such situations occur in our streets, probably every day,” Laforce told reporters following the commission meeting. “It resulted with no injuries to either the officer or the offender that was involved.”

While it took a week for police to release the footage, Laforce didn’t take an issue with the timing.

“I know it took some time because there’s lots of video that actually then became sent to us,” he said. “Of course, the investigation itself had to conclude, we had to make sure there wasn’t further follow-up or perhaps future charges to be laid. And then, of course, we had the commission meeting this Thursday, so I think the timing was fantastic.”

He said the officer’s use of force was “pretty fair with all things considered.

“I think that everything was reasonable by my perspective, but I do appreciate everybody has different perspectives.”

During the commission meeting, Staff Sgt. Joe Tassone said the officer had other options available, such as less lethal or potentially deploying a firearm, but he chose not to.

“There was an ability to end a confrontation and control the situation because the subject’s attention was turned away for a moment, which gave that member the ability to take that opportunity,” he said. “We do train our members that if there is an opportunity because the public’s risk is held in higher regard than our own, then we will take that step.”

Nina Laderoute has experience working with unhoused individuals and attended the protest over the weekend outside Edmonton police headquarters. She came to Thursday’s commission meeting and said she was glad police released the CCTV footage, but her position regarding the officer’s action hasn’t changed.

She said the officer could have handled it differently, like grabbing the woman’s wrists from behind and arresting her.

“It worries me because if they think that this is OK, that committing assault is OK,” she said. “I think that we should be questioning that and looking for more evidence and making sure that it’s not worse than some people think because a lot of us have seen worse than that video with no weapon involved.”