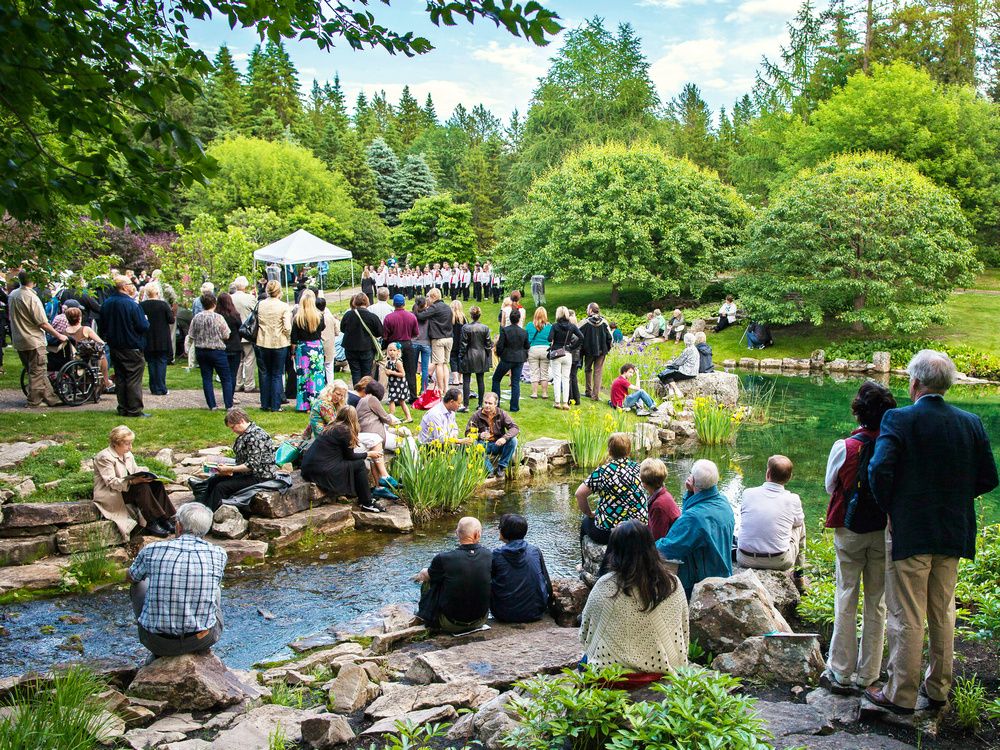 Like an imaginary opera plot where the dragonfly prince emerges from a long sojourn as a water-nymph, Edmonton Opera is coming out of the long pandemic darkness transformed.

It has a new artistic director, Joel Ivany. His excitement at new ways of looking at opera is palpable and combined with a deep appreciation of the traditional repertoire.

It also has a new chorus master, Edmonton’s Shannon Hiebert, well-known as a chamber-music pianist, as a pianist in solo vocal recitals, and as a repetiteur.

And it has just announced its new 2022-2023 season, which, while having something of the old, really doesn’t look like anything Edmonton Opera has offered before.

The season opens, though, on Friday with the return of a popular tradition: Opera al Fresco. After a three-year absence, Edmonton singers will present selections of operatic favourites on four different stages in the University of Alberta Botanical Garden, including the spectacular Aga Khan Garden. There will be charcuterie snacks and a selection of wines, and the proceedings start at 7 p.m.

Even this, though, is going to have a new feel. In the past, the event has always taken place in June, and the gardens will have different look in the more mature month of August.

“It’s a kind of unofficial end to the summer, rather like Symphony Under the Sky,” says Ivany. “You get the best of the outdoors and the warm weather with beautiful, operatic experiences, and you get to move around the gardens.”

A sense of tradition also accompanies the opening of the main season, with a new production in the Jubilee of one of opera’s most popular and dramatic works: Puccini’s Tosca (Oct 22-28). It’s a tale of love and blackmail, revenge and murder, passionate love and political revolution. In its classic central act, the chief of police, Scarpia, blackmails Tosca into making love to him on the promise of releasing her artist revolutionary lover Cavaradossi.

Tosca is played by a celebrated American soprano, Karen Slack. She has sung in many of the major American opera houses including the Met and San Francisco Opera, and she was also co-director of the 2020-21 opera program at the Banff Centre.

Peter Barrett debuted as Marcello in Edmonton Opera’s excellent production of La Bohème earlier this year, and is now returning as the wicked Scarpia. David Pomeroy returns to Edmonton Opera to sing Cavaradossi.

American Alison Moritz, who has a reputation for innovative interpretations of classic opera, makes an Edmonton Opera directorial debut, and Simon Rivard who conducted that La Bohème, returns to the podium.

After Tosca, things look very different. Gluck’s Orphée+ reaches the Jubilee stage in January, and Edmonton Opera is warning us to get ready for this. Originally conceived by Against the Grain company in Toronto, of which Ivany was a co-founder, it features South Korean counter-tenor Siman Chung.

“It’s been rearranged with electric guitar and synthesizer as well as regular orchestral instruments,” explains Ivany. “There are virtual, digital and live choruses, and the production relies heavily on video projection. So it’s very exciting in terms of what the future could be — a contemporary take on a very old opera story, and on opera itself.”

The season closes at the end of March with a staging of a baroque work originally composed for a church, not an opera house. Pergolesi’s Stabat Mater has been re-imagined as a choreographic performance, directed by Jennifer Tarver, who grew up in Edmonton. British counter-tenor Magid El-Bushra and soprano Mireille Asselin make their Edmonton Opera debuts.

The production experiments with the use of space. Both audience and performers will be on stage in the Jubilee.

“It will be in two parts,” says Ivany. “One will be in the loading dock shop of the theatre, and then everyone moves into the main space on stage.”

Other events include a Christmas holiday concert with the Edmonton Symphony Orchestra in the Jubilee Dec. 14.

In a different initiative at the end of October, Edmonton Opera will be instigating a new prize, the Rumbold Vocal Prize, for emerging Canadian singers, thanks to a generous bequest by Grace and Arnold Rumbold. The public will be able to attend master classes and performances by the finalists.

Where: University of Alberta Botanic Garden

Tickets: $35 for children (12 and under) and $70 for adults at edmontonopera.com