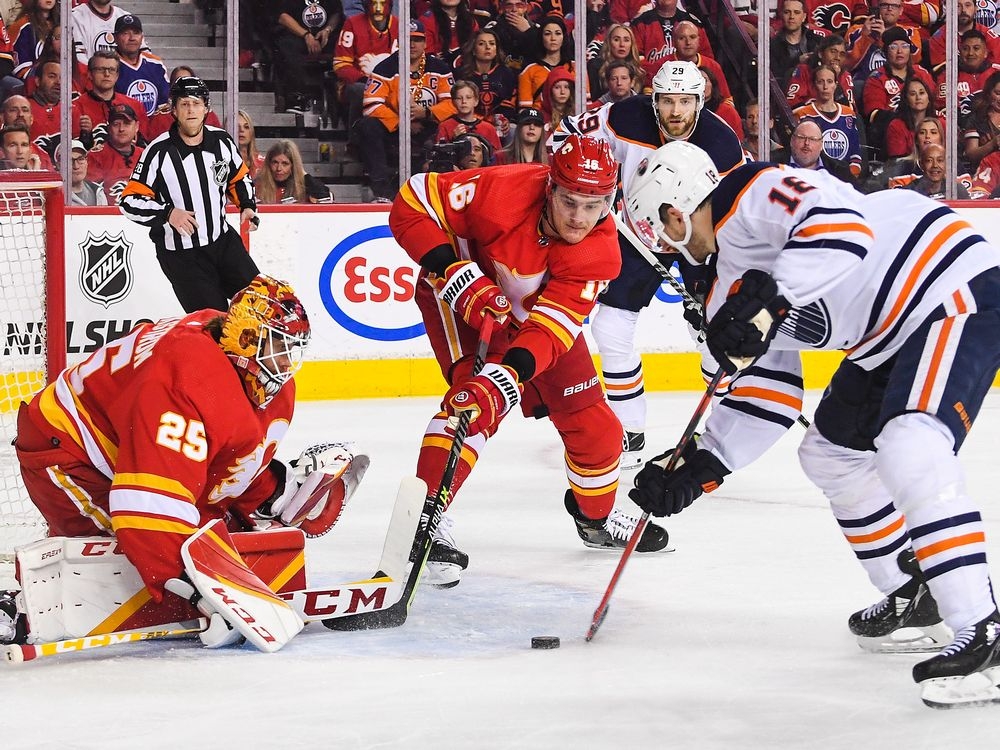 They turned the series into a best-of-five with home-ice advantage shifting to Rogers Place.

They scored 13 goals (11 of which counted) on Calgary’s star goalie in two games.

They’ve gone on four-goal runs twice in two games, planting the seed deep in Calgary’s head that no lead of theirs will ever be safe.

They’ve made it very clear that the Flames don’t have an answer for Connor McDavid, mostly because there isn’t one.

After a 9-6 loss in Game 1 and an early 2-0 deficit in Game 2 made it seem like the Oilers were in over their heads against Calgary, it is suddenly looking like advantage Edmonton after Friday’s rousing 5-3 comeback squared the series.

As Michael Scott from The Office put it so eloquently when a corporate power struggle shifted in his favour: ‘Well, well, well, how the turntables.’

“We’re all happy with the split in Calgary, especially after the first game,” said Leon Draisaitl, whose breakaway goal iced a Game 2 triumph that changes everything. “We’re very happy coming home with a split.

“We had a good game Friday and still think we haven’t shown our best yet. We’re looking to do that Sunday.”

There’s no such thing as game-to-game momentum in the playoffs — the L.A. Kings won two in a row after losing 6-0 and 8-2 — but fighting back to win Game 2 absolutely changes the energy in this series.

It takes the Oilers off the endangered species list (teams that fall behind 2-0 lose the series 80 per cent of the time) and puts them on equal footing with the big, bad Flames.

“After Game 1, we knew we had to be better,” said Edmonton defenceman Evan Bouchard, who is growing by leaps and bounds in these playoffs.

“And we knew we were going to be better. I think it showed in Game 2. It’s a learning process. It’s a long series, you play the same team over and over again and things are going to change. We changed for Game 2 and got rewarded.”

Edmonton’s ability to get off the canvas has made for some compelling theatre. They came back from 6-2 to tie it 6-6 in Game 1 and used another four-goal run to turn a 3-1 deficit into a 5-3 on Friday.

Coming back like that, on the road, is an impressive display of post-season mettle for a team that, prior to this season, hadn’t won a playoff round since 2017.

“We won a game Friday night where we had two goals called back. And we found a way to win a game. How often does that happen?”

Not very. But, when a team never says quit, and is lead by a captain who can singlehandedly take over a game, that game is never over.

They also have a knack for learning from their mistakes and being better for it next time the puck drops, which is why they haven’t lost three games in a row in regulation or overtime since the middle of January.

“Game 1 was more about our compete level and being ready to play, not getting pushed off pucks,” said Draisaitl. “That’s something that was a lot better in Game 2 for us.”

Up 3-1 at in the second period at home and poised to take a 2-0 series stranglehold, the Flames know they let one get away. They are now face-to-face with an opponent that is getting better by the game.

“It kind of felt like we invited them back into it,” said Flames defenceman Rasmus Andersson. “Especially after our start to the game.”

The Oilers are definitely back, and loving every minute of it.

“This is fun,” said Draisaitl. “It’s the Battle of Alberta. Both cities are very, very intense about it and who knows when this is going to happen again. This is great time for both teams and for both cities.”

The series is living up to the hype, which seemed almost impossible given the amount of hype. But, now that the Oilers have made their stand, stolen home-ice advantage and shown they can win this thing, it’s hard to imagine that it won’t get even hotter.

For an Oilers team that’s made an entire season out of pushing through adversity and silencing doubters, hotter is fine by them. They say they’re ready for anything.

“In those times, you learn about each other,” said Woodcroft. “You learn about people’s capabilities in stressful situations. Most importantly, you learn that we have the people who can get the job done.

“If we work together and we play toward a certain type of identity, we think we have what it takes.”