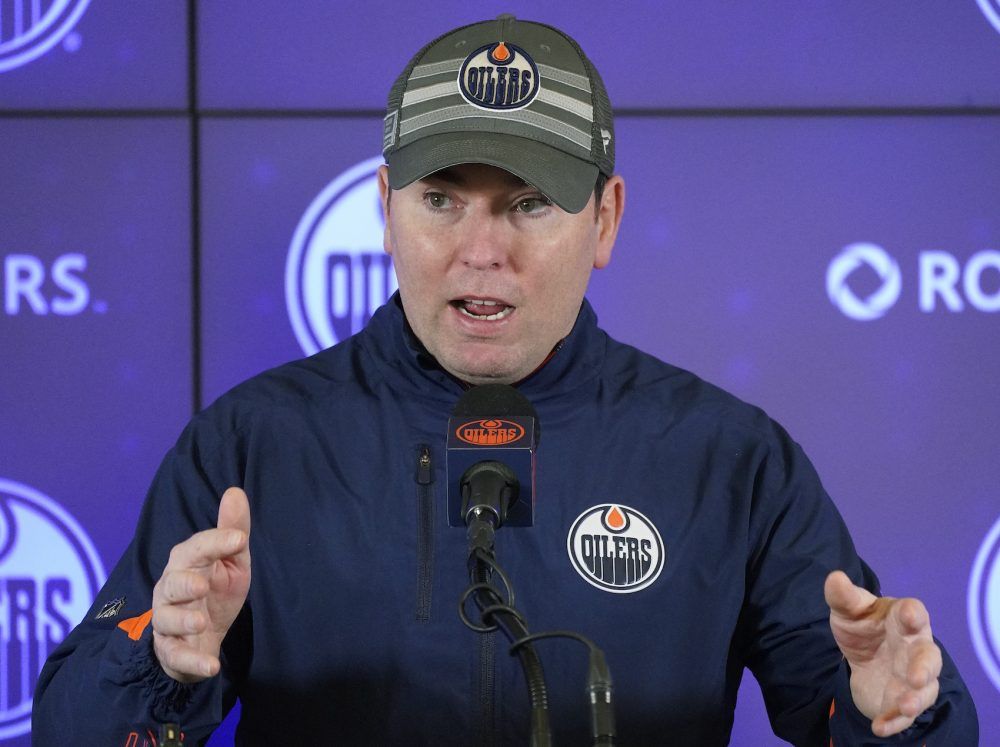 The Edmonton Oilers are on the verge of nailing down their 3rd consecutive post-season berth.

There is no “x’ beside their name in the standings just yet. But a crucial regulation time win over the 9th place Vegas Golden Knights Saturday has a clinch now clearly within the Oilers sights.

How IS Jay Woodcroft doing this?

Here’s this week’s edition of…

8. The win over Vegas Saturday elevated the Oilers to 94 points, good for 2nd place in the Pacific. The Kings also won to keep pace. But the Kings 4 points back with just 5 games left and Edmonton with a game in hand on L.A., the Oilers are on track to punch their ticket to the post-season. Their magic number is now just 6.

7. It has been a highly emotional season. A small corner of the fan base has been especially pessimistic. But these 94 points when taken in context tell a much different story: Just 76 games in, this is already the 3rd highest points total for the franchise since 1987-88 (99). The Oilers won a cup that year. The 2nd best was 2005-06 (95), when the club went to the cup final. They may still eclipse both.

6. As a role player, it is clear veteran D-man Kris Russell is still capable of having an impact as an NHL player. He has played a meaningful on-ice role in the club’s last 2 victories. But do not look too quickly past his impact off the ice. The reaction of his teammates to his blocked-shots record, his big hit versus Nashville Thursday and his eventual game-winning goal Saturday are a tell that the old cowboy is a source of inspiration for his teammates.

5. I have never agreed with pinning previous playoff shortcomings on the Oilers top players. To my eyes, the far bigger problem was the lack of depth in the lineup behind Connor McDavid, Leon Draisaitl and Darnell Nurse. That would seem to have been addressed this season. But among Ken Holland’s moves the Evander Kane signing has had the biggest overall impact. It has allowed Ryan Nugent-Hopkins to instead slot in at 3C where he can win a lot of matchups, and leave Ryan McLeod at 4C…where any young player has a better chance at success.

4. Much is being made if Jesse Puljujarvi’s currently dry spell. He has just 3 goals in his last 32 games, just 3 so far in 2022. There is no avoiding the stats, especially considering he plays alongside either Connor McDavid or Leon Draisaitl. But Puljujarvi has been far from bad. His defensive game has remained dependable. And he is doing lots right in the O-Zone. Jesse has at least one shot in 19 of his last 20 games. And he has multiple shots in 14 of those 20. To my eyes, the lone issue is that Puljujarvi appears to lack high-level finish. Just remember the long dry spell Kailer Yamamoto had in the middle of the season. The difference is that Yamamoto was not even getting his looks. Jesse is.

3. Warren Foegele is playing his best hockey as an Oiler. And now at 12 goals on the season he is just one off his career high. There are still those who choose to not like Foegele based on the acquisition price. But in the short-term, it is looking very much like Ken Holland is winning that deal. The “acquisition price,” Ethan Bear (who I have always been a fan of) is barely keeping his head above water as a 3rd pairing D-man for Carolina. Bear’s TOI has fallen off from 18:59/game in his career to just 16:00 this season. At this moment in time, Bear is not a better D-man than either Tyson Barrie or Brett Kulak, the men currently occupying the Oilers bottom pairing. And Foegele plays the heavier, playoff-brand of game that all teams need.

2. I have written multiple times this year that I believed Mike Smith was still capable of leading the Oilers to the playoffs. But I always had a caveat: Provided he could stay healthy. Well, of late Smith has. And the results have been impressive. Smith’s back-to-back shutouts are the rarest of birds. Smith is just the 6th goalie in NHL history to do it after turning 40 years of age. The others: Johnny Bower (twice), Dominik Hasek (twice), Martin Brodeur (most recently), former Oiler Dwayne Roloson and George Hainsworth. Four of those guys are in the Hall of Fame. The Mike Smith-Mikko Koskinen pairing in Edmonton has displayed cracks. But when the most effective, the two men have more-or-less shared the net…keeping Smith healthy and Koskinen fresh. The bigger question now seems to be whether they can be a winning combo in the post-season. That’s relatively rare.

1.The Oilers are 21-8-3 under Jay Woodcroft. As much as numerous Oilers watchers (including me) did not believe Dave Tippett was the main thing that ailed this club, it is clear the change behind the bench has had a positive impact. The team did not just get the dead cat bounce. Its performance has consistently improved. So, what IS Woodcroft’s secret sauce? Every coach has a combination of systems and a way of communicating them that is unique to them. Like most people I am not in the room and so cannot say for sure. But what Woodcroft demonstrates on the ice is a greater commitment to giving more players bigger, more meaningful roles. The Bottom 6 gets more TOI. More players get special teams’ time. More players are trusted in critical game situations. All those tactics breed confidence. And ask any NHL player…confidence and a sense of value is a major ingredient in success.

Of course, Jay Woodcroft was not the only change behind the bench. The addition of Dave Manson at the other end of the bench cannot be ignored. Certainly, the deployment of the D-men has also evolved. One of them is related to Woodcroft’s adjustment, the more equitable divvying up of roles and ice time among the 6 (or 7) men dressed on any given night. The other is the teaming up of Darnell Nurse and Cody Ceci as the top pairing. Since the change behind the bench to Manson…Tyson Barrie is +10, Ceci +19, Nurse +21. And Duncan Keith has generally helped settle Evan Bouchard down and find a new level.

Either way, while Ken Holland had never made a coaching change mid-season before now the evidence since suggests he was right to do so. Holland often gets called out for being too old school and conservative. Some of that is fair. But the coaching moves to Woodcroft and Manson and the recent FA signing of Noah Philp suggest that the G.M. is not afraid to venture out of his comfort zone.

Though, Holland’s success will not be measured by getting to the post-season but by the ability to win a series…or more. And that still remains to be see.

Recently, at The Cult…